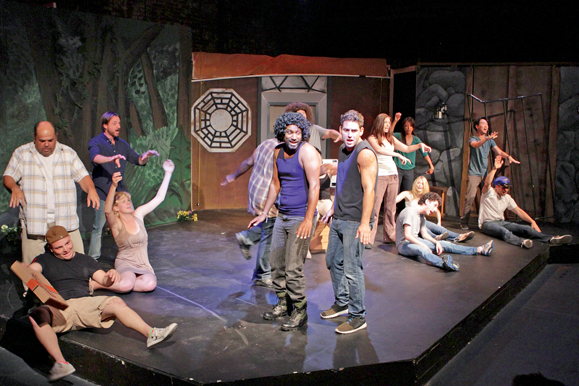 The mind bending television show Lost finds new and exciting life on the stage in Hollywood. The great news? It’s a musical! The best news? Audiences choose the ending they want, and I doubt it will be the one aired on television!

Running from September 18 to October 26, the production features 16 actors portraying a dizzying 72 characters over two hours at the Lillian Theatre. Lost the Musical: We Have to Go Back (brilliant title) is written by Steven Brandon and Steven Christopher Parker. The spectacle is an unauthorized parody of Damon Lindelof and J.J. Abram’s beloved show, written in the style of similar productions like A Very Potter Musical. It features 16 musical numbers including reworded versions of Don McLean’s “American Pie” and Journey power ballad “Don’t Stop Believing”.

After raising $8,660 through Kickstarter, the show became a reality. The writers hope the show will be well-received by the right people so they can take it on the road. Fans from all over the world are begging for a chance to see Jack Shephard and the rest of Oceanic 815’s survivors up close and in person.

The premiere landed on the ten-year anniversary of Lost’s first ever episode and cast members Kimberley Joseph, M.C. Gainey, Sam Anderson and Andrea Gabriel were there to bear witness to the festivities. Any of the stars of the show have an open invitation to appear in a cameo role.

An important difference, besides all the music, is the ending. Many viewers were notoriously unsatisfied with the series finale, and Brandon would like to bring some closure. “I would have liked all my questions answered, and there were some unanswered questions. That’s what we do in the alternate ending. We just make up these answers ourselves based on a lot of good information we have, having studied the show so much.” The audience votes on their choice from three alternate endings.

Curious? Information is available at the show’s website, LostTheMusical.com.