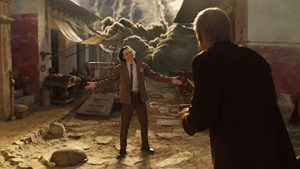 Loki Keeps On Getting Better The More You Watch

This review of Loki might be shorter than a usual show review. During my initial impressions (if I may have this ego trip), I was spot on with how the series would feel. But what I’d failed to guess was how far they would take this premise.

The true plot trajectory was somewhat apparent with the revelation that Loki is the most common variant that the TVA comes across. This show seems on a collision course to become an entire series functioning like a crossover Doctor Who episode. Loki is playing off himself, interacting with himself, and flirting with himself. Which is fitting for a character defined by narcissism.

He’s So Likeable He Carries Scenes By “Himself”

And this only works because of how delightful Tom Hiddleston is. I didn’t give him enough credit in the main review: he’s killing it as Loki. His manic energy, understated bombast, and opportunistic personality reminds me of a sneaky teenager who’s clever enough to duck out a window but didn’t consider how he’d get back into the house. He’s what you’d expect a god of mischief to be.

Which makes it even more fun pairing him with his female counterpart, Sylvie. I especially like how they give them different magic, but mostly the same backstory. Them being alternative versions of themselves is believable, and their distinctions charming. Sylvie’s more of a planner, and Loki’s better on his toes. Together, they have a “criminal team that’s doing a heist” energy that’s already paying off by episode three.

With Each New Loki Added, The Chaos Increases

This strong characterization even applies to fight scenes. Sylvie fights like she’s from Captain America’s corner of Marvel, relying on artful usage of the surrounding space and super-strength. But you can still tell, with both Loki versions, that they’re not as overwhelmingly powerful as Thor or Hela. They must be strategic and cunning, even when throwing punches. The scene where they paused, both ready to hit the other, and looked at a common enemy is the most Loki thing I’ve ever seen.

Moments like these just keep stacking up and impressing me. The whole show impresses me. Watching an episode is taking a trip into a weird and wonderful adventure and it passes fast. They end each episode on a hook, so you’ll come back for more, but Loki’s so good there’s no prompting needed. This is peak nerdy television at its best.