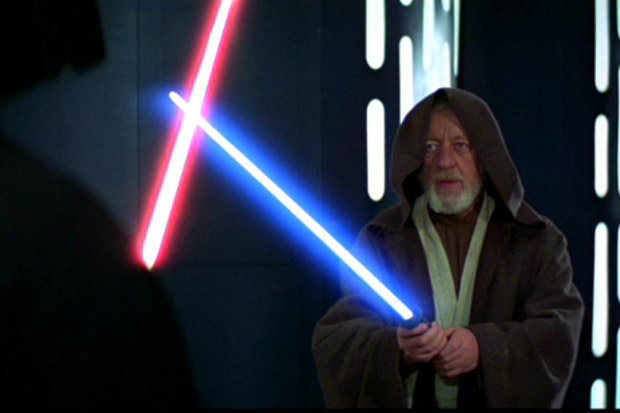 A Jedi’s greatest weapon is the lightsaber. It goes without saying really, doesn’t it? They use it in every battle whether it’s against other Jedi’s or to reflect a Stormtroopers bullets. But what we’re wondering is whether the glorious device from the Star Wars franchise can actually be built for real. It would be pretty amazing if it could, wouldn’t it?

Let’s start with the handle. It may look simple from the outside, but it’s a maze inside that does all of the work. There’s the power field conductor, the primary crystal, cycling field energisers, a ring tuning flange, blade arc tip… we could go on, but we won’t. It’s not making a lot of sense to us. But there are 21 different elements inside the concealing handle.

All of that aside, it has recently been revealed that scientists are one step closer to building a lightsaber, even if it’s not in the way the weapon was originally imagined with its ring tuning flange. The scientists have built objects from ‘photons in super-chilled gas’, which suggests that “weightless particles of light could be joined to form a type of molecule which has its own peculiar force” – this has been built on the discovery from 2013. Now? They can also move side-by-side. But they’re certainly a long way off in creating actual shapes and objects from these discoveries.

But we want you to put science to the back of your mind for a minute. Another key part of the Star Wars lightsaber is its famous sound. The person behind the famous ‘zummmm zummmm’ was the franchise’s sound designer Ben Burtt. It took three different elements to get it right. Firstly, there was a projector at his university, which had an interlock motor that made a wonderful humming sound. But it didn’t have that ‘buzz’ that Burtt envisioned.

“I was carrying a microphone across the room between recording something,” he said. “And I walked [past] the microphone passeda television set which was on at the time without the sound turned up, but the microphone passed right behind the picture tube and as it did, [it] produced an unusual hum.” Once the two sounds were combined together, Burtt wanted to ensure the sound had movement when the lightsaber blades cut through the air. This was created by waving a microphone back and forth across a speaker. Put all three together, and you’ve got yourself a masterpiece.

Although the making of the lightsaber itself could take a while, it’s fair to say that anyone could recreate its sound – and that’s the most important bit in our eyes. Or ears.

So your dreams of becoming a Jedi knight may finally come true at some point… but at what cost? We can guarantee that if the lightsaber were to actually exist, it’d be the most expensive weapon to ever behold. But just think about all of that power…