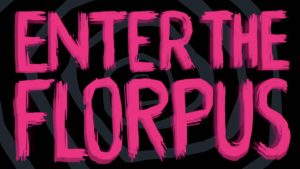 Zim Has Been Waiting A Very Long Time

Invader Zim: Enter the Florpus is a new addition to a series that never got a proper ending. It’s a movie-length version of an average episode, and it’s entirely faithful to the old series, to the point of reusing old jokes.

And that’s all great—it’s wonderful to hear the voice actors reprise their roles, pitch-perfectly, with Zim’s voice actor seemingly slipping back into the mannerisms like he’d been waiting for the opportunity. 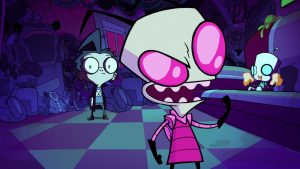 So Many Years Later, And It’s Still Our Inept Zim

The tone of the series also slips right back into its old shoes. I mentioned in my review of the first episode that the show is rampantly anti-consumerism, and Zim and Professor Membrane both standing in as vague Steve Job’s parodies, while not original material to cover, still shows the same wit and satire and disdain as before. There’s one line, and I leave you to find it, that perhaps covers that entire worldview with one great thudding blow.

Really, for an old fan like me, this might be a perfect step back into the series. They got the characters right, the voices, the tone, the madness, and somehow managed to remind me how cute GIR really is and why he’s remained loveable even this long after the show ended. 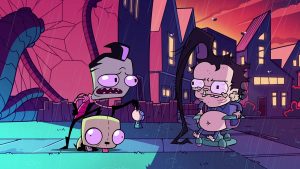 Now, before I go off on this, I understand how hard animation is, to the degree anyone who’s not worked in the industry or studied it heavily is capable—a layman with an internet connection is I—but this is not how Invader Zim is supposed to look. It’s the right character models mostly, even if the outfits have been updated, but they are too cute. Dib and Zim have faces that are too adorable for this dirty-looking show. The grime that I consider intrinsic to the series is surface level at best. The plot is as dark as ever, yes, but I’m talking visuals here. They didn’t animate it like before. I mentioned a concern for this in my review of the trailer—but the movement is extremely cleaner and floatier and smoother than it should be. In a lot of other places, this would not be a problem, but Zim is a show that wears its grungy look on its sleeve, and it is bizarre to see it gone. 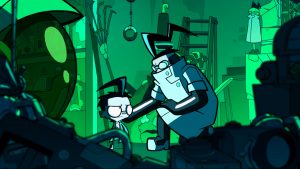 Zim Has A Few More Problems On A Meta Level

I have a few other complaints, too, but they are admittedly a lot more minor in nature. Unless they plan to bring back Invader Zim for a proper series, the fact they still have not ended the story is annoying as a fan. Additionally, and this is truly a nit-pick, the movie was very late to the punch of multi-dimensional travel being shown as animation styles changing. Into the Spider-Verse and the finale of Gravity Falls both pulled that trick, and it’s a little played out now. I’m not saying it wasn’t cool and impressive, I was just expecting something different from a series that’s always been different from other shows.

But those are all forgivable. I want to make it very clear that Enter The Florpus is an amazing new special, that despite being too fluid, still has incredible moments of animation and the characters—though this might be my nostalgia talking—I think still hold up as fun, quirky, and lovable. 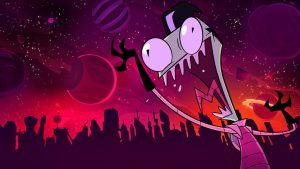