Remember the first time you watched the Jetson’s and dreamt of hovercrafts? We were all a little disappointed when the year 2000 came around and we didn’t all own the latest model of the hover car. Or what about the time you were watching Star Wars: Return of the Jedi and though, “Man, those speeder bikes are awesome, I wish they were real!” Well today is your lucky day.  According to Yahoo news, in the next few years that dream could become a reality thanks to a company by the name of Aerofex that has created a simple yet efficient hover bike design. 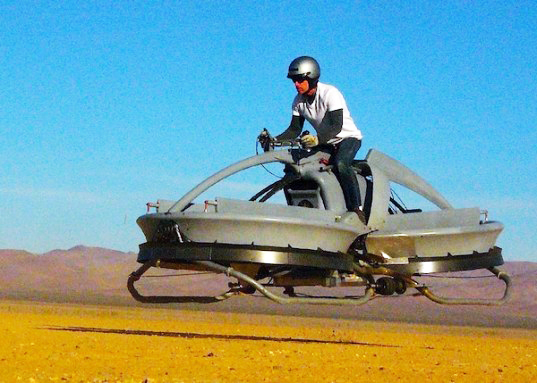 Featuring two rotors, the hover bikes were originally too unstable and prone to rollover to be used by human pilots. However, after some modifications by Aerofex that allows for the rider to use knee level control bars with their natural sense of balance to help control the craft, Aerofex has moved forward with manned tests.

So far human pilots are only testing the hover bikes at speeds of up to 30 miles per hour and 15 feet above the ground, though the craft is capable of much greater speeds rivaling that of a helicopter.

Aerofex founder Mark De Roche explains, “They do have unique performance advantages as they have demonstrated flight within trees, close to walls and under bridges.”

So what does all this mean? It means that we may actually, in our lifetime, fly on hover crafts to and from work. Maybe.