The manga Saturn Apartments is a great example of a story in a rather small genre: slice of life in space. This means that so far nothing has blown up, nobody has flown at the speed of light, and there are no laser guns. But that shouldn’t indicate by any means that the story isn’t emotional or subtly captivating.

The series begins when the protagonist, Mitsu, graduates from high school and enters the window washer guild to help pay back his school debts. Already motherless, Mitsu was left alone when his father died while out in space on a job. Now, that he has the chance, Mitsu wants to become a window washer like his old man. In the first volume, the reader follows Mitsu, a thoughtful, caring young man, as he is introduced to the other members of the guild and he learns the ropes at his new job. It’s not the easiest gig out there, considering the threat of falling off the side of the complex and drifting off into space. 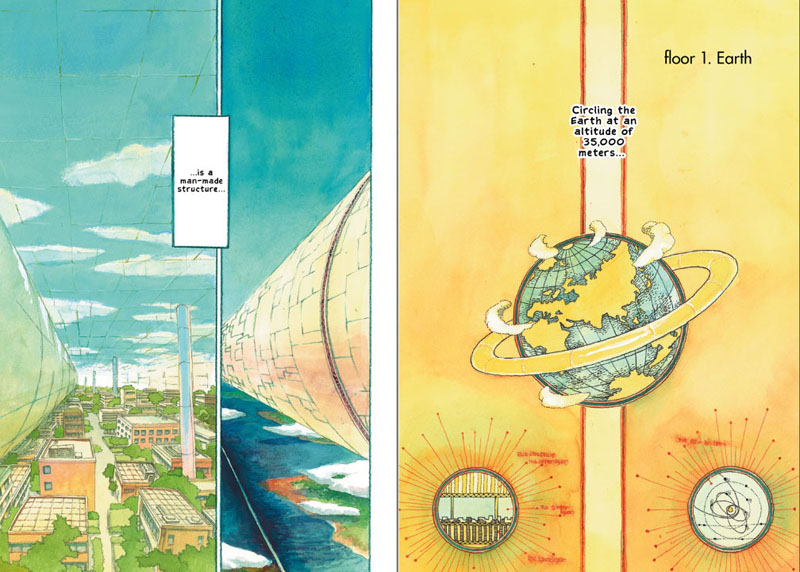 Humanity now lives in this giant floating ring around the Earth. Our former planet has been turned into a nature preserve. The apartment levels are divided by skills and social class. Those with more wealth and influence live on the upper levels, those with important jobs live in the middle levels, and everyone else lives on the bottom. From the very beginning we are told that natural light is a precious rarity, with most of it coming in on the upper levels of the ring. While the window cleaning guild and its members are not treated especially well, their job is very important. Without them there would be no natural light at all. They are probably some of the most mobile citizens in that they can go anywhere on the complex in order to complete their jobs.

As the story goes on we learn in bits and pieces that the lack of sunlight is responsible for immunodeficiency disorders in many citizens, and that people are less happy with the way society is divided up than it may first appear. By Volume Two there are also hints that some of the educated hold doubts in the effectiveness of the reconnaissance missions that are being sent to Earth. It is also apparent that the divisions between the floors of the ring have created some disgruntlement in the lower level classes and perhaps some ignorance in the upper. 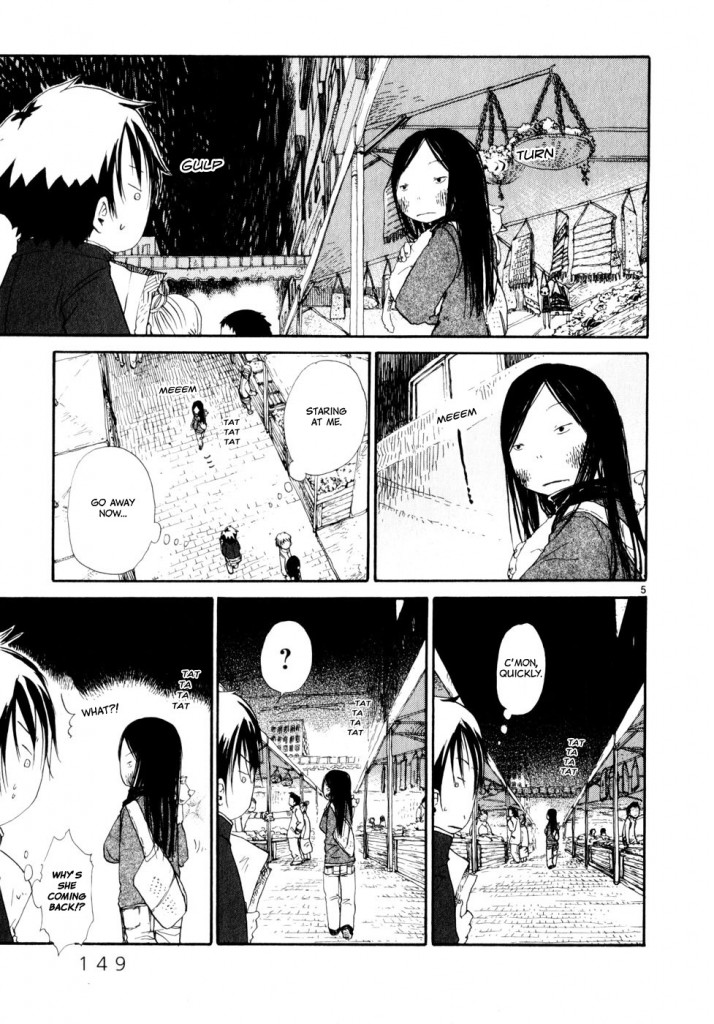 Mitsu (left) and the hilarious Sachi (right) from Volume One.

Hisae Iwaoka, the writer and artist of the series, builds the world of Saturn Apartments slowly but surely. Mitsu’s struggles with becoming his own person while living in the shadow of his deceased father are realistic and don’t seem to tip too far into the melodramatic. As he meets various likable, puzzling, or odd characters, discovering their connections to his father, he too builds relationships with them. Because of the job-related nature of the series he also interacts with interesting clients in significant ways, shares in their stories, and learns from them.

This is all solidly normal slice-of-life territory, so some of it isn’t the most original. But it is written honestly, without the saccharine taste that some really bad slice-of-life can have, and none of the themes are insignificant. I think Iwaoka may also have a game plan for taking advantage of the sci-fi aspect of her world and upping the ante. Having consumed as much sci-fi as I have, I know that cities divided into levels are never going to stay that way. The tension may not lead to full-blown revolution, but I have the feeling that at some point change will occur.  And, as I mentioned before, what the teams of scientists are doing down on Earth has not been fully explained yet. It’s possible that something will come of that as well.

Iwaoka’s art is appropriately charming for the slice-of-life tone of her writing, but she has a knack for giving her quirkily round characters very expressive faces. Not everyone we meet is friendly and she proves herself very able to draw much more than just nice. In fact, the emotional issues with which she deals are often much more heavy than her art style might lead one to believe. The manga is in black and white (like most manga are) but I often found myself wishing for color splash pages, anything more than the couple color pages at the beginning of the volumes. I wondered what the colors would be like in the various levels of the apartments and how the Earth would look through newly cleaned windows. If I’m thinking about it that much it means the story left its mark. This unassuming series proves once more that one doesn’t need explosions to write a sci-fi story that sticks with its readers.

This review is based on Volumes One & Two of Saturn Apartments (Dosei Mansion) by Hisae Iwaoka. The full seven volumes of the series have been translated and released under the Ikki line of VIZ Media.