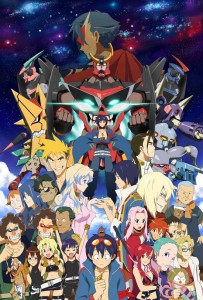 Gurren Lagann is an anime that originally aired in Japan in 2007.  Since then it has been re-dubbed in English and is actually on Netflix now.  It follows the story of downtrodden humans who are forced to live underground, subjugated by beastmen and the tyrant Spiral King.  The story truly begins when Simon and his “brother” Kamina get above ground when a massive mecha known as a gunman falls through the roof of their village’s cavern.  They then slowly begin to realize why they lived underground and fight against it, getting other humans to rise up along with them.

The beginning of the story is much different from the later episodes of the anime in that it seems almost playful.  It’s once the heroes begin fighting the four generals of the Spiral King that the show really takes off.  If you’re watching the show and don’t seem interested, give it a few episodes, it gets much better once the plot becomes more serious.

If you’re a fan of Gundam or Code Geass or other big mech shows, Gurren Lagann is for you.  The combat is fun to watch and just when you think it’s gone far enough, the show gives you another surprise, another level.

If you need a show to hook you quickly, then Gurren Lagann is probably not for you.  Even though the show is short, only 27 episodes, it takes about 6-7 episodes for things to really start getting interesting, and then there is a bit of a lag after episode 9 once more.  It took me several months to get through the first half of Gurren Lagann, but at the same time it took me about two days to get through the second half, so you be the judge.

It’s a good anime.  It’s entertaining but it still makes you think.  The mecha combat is fun to watch and most of the characters are compelling.  Some of the best are Simon, Viral, Rossiu, and Kittan.  I would recommend watching it.  If you absolutely can’t get into the beginning, very well, but if you can get through it, you’re in for quite a ride.