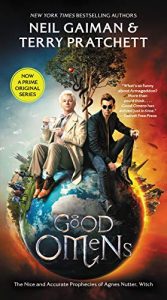 With the upcoming release of Good Omens, the show on Amazon Prime, I figured a review of the book that started it was in order. Though, if you’re a fan of Terry Pratchett or Neil Gaiman (as you should be) then you’ve already at least heard of this book.

But, for those that haven’t, let’s get into it, shall we?

And the first thing you need to understand is that with the two authors involved, it was bound to be absurd and quirky—and boy is it. Good Omens is a book that takes something as intense as a biblical war and the end of the world and makes it into something surprisingly comedic and just surprising overall.

Because, for a book set in the modern times, yes, they have the world almost end by nuclear war, but they don’t linger on that. Instead, the plot focuses, of all things, on mostly a set of kids. On friendships. On romances.

It’s honestly rather meandering. There are a lot of characters, all lovable sure, but, until they come together, the story will jerk you all around the place. I see why it’s slated to be a show, as it works like one: utilizing rapid cutting between characters. In fact, it doesn’t really have a main character—it’s got a bunch of people bumbling around and getting into shenanigans.

If it wasn’t for each of these characters being wholly entertaining, this would’ve been off-putting and disjointing, but it keeps anything from getting too boring or monotone by leaping around. Some vignettes are honestly worthy of much more than we get of them. The four horsemen are a joy. The dark nuns are such a weird concept. 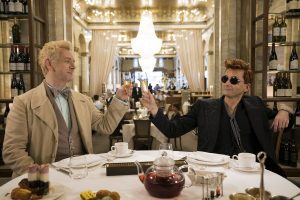 But the real standouts (and the television show also seems to have figured this out) are Crowley and Aziraphale. Their written interactions are so smooth I felt like I was witnessing a conversation in real time. They have such an immaculate interplay that they deserve to be around as much as possible. And how the book handles their powers, as divine and damned beings, is also just a lot of fun and different from a lot of other magic systems in fiction.

Fun is the best word for Good Omens. Also acceptable is “joyous,” “funny,” “happy,” and maybe even “profound.” For a book about the end times, it’s not that dark. For a book about the death of the world, it only ever gets graphic once. If not for a few plot points, it might even be okay for kids.

I knew Good Omens was good going in—but, it’s better than good. And, if you haven’t already, I think it’s about time you gave it a read.