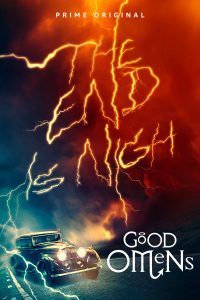 hile I do agree that book adaptations need to be accurate to their source material, the first episode of Good Omens is so accurate that I’m left with a dilemma having finished the book so recently: it’s the same thing again.

Like, the same. Dialogue is often book accurate, to the word, as is the narration. Yes, getting visuals attached to it makes for a rewarding experience generally, but I think this show expects its fans to be people who have read the books a few years back and fondly remember it.

And, for those people, this show is a blast.

Because, of course it is. The dialogue is correct, so it’s funny and silly and clever, and the characters are just as likable as they were on the page. As wanted, expected, and assured basically, Crowley played by David Tennant is amazing, and he owns the role. His eyes are a little unnerving and odd looking the entire time—I suppose that’s the point—but otherwise, there’s a reason why his depictions of The Doctor, Killgrave, and his voice work are all so loved. But the rest of the cast is solid, too. John Hamm plays the smug angel of Gabriel fantastically, Frances McDormand makes for an excellent God, and Michael Sheen has a slight awkwardness that lends some depth to his angelic character’s moral concerns. The only bad acting here is child acting, and that’s mercifully short in the first episode.

This may also be a short review from me, but, honestly, if you didn’t literally just read the books as I did, this will be something worth seeing. This is one of the driest British comedies I’ve ever come across, and I mean that as a high recommendation.

Good Omens is a fantasy show that’s not going to win anything for special effects, but it doesn’t have to for it to be fun. The comedy stayed true, the story is being untainted as much as possible, and the actors are great. Good Omens is just clever fun—and I suggest you give it a watch before the end of the world, if not much sooner.