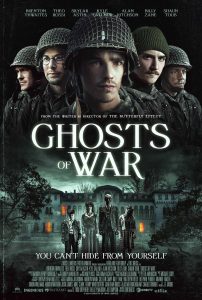 Ghosts of War Shows So Much Initial Promise

Ghosts of War has given me mixed feelings ever since I finished watching it. Even as I type this, I am unsure of what to make of this movie. It is two ideas wrapped into one, and one half is so much better than the other.

The basic concept of Ghosts of War is that it is a haunted house story, but with soldiers holding the house during World War 2.

And it is telling of this movie’s horror chops that it makes the Nazi forces showing up and attacking the less tense aspect of the film. I was relieved it had gotten to a gunfight, because what was before and after was frankly some of the most effective horror I have ever seen.

This movie messes with you in every way it can. The cinematography, the score, and the set all combine to create this atmosphere of dread and danger that does not let up and does not let you get comfortable.

Sure, it uses jump scares, but it uses them to their maximum effect. They hit like a truck each time, and then easily set you up for the next one.

I audibly announced this was the best horror movie I had ever seen and meant it…until the other half came in and upset that dynamic.

Perhaps that’s why Ghosts of War presented its horror so well. It knew that it did not need to hold back for the sake of pacing. It could go for it—and that made the horror stronger.

But the second half of the movie, and I won’t spoil it here, is such a different film, and is not nearly as compelling. 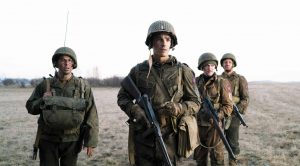 Ghosts Of War Really Derails Itself For The Worse

I wanted this to just stick to what it initially seemed, and for the masterful, mind-melting horror to continue unabated until the plot ended. The initial premise and execution were strong enough to carry a film.

But we have the movie we have, and I can’t change that. So, with a heavy heart, I say the second half is only a quarter as strong as the first.

And some of what carried over is how well-shot and gloriously good-looking this film is. The special effects all look amazing. It’s gristly, but there’s some impressive makeup and prosthetic/visual effects work I’m still boggling at even now. At nearly no point is this not a treat for the eyes. 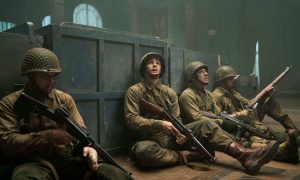 And then there’s the acting. I want to give special props to Kyle Gallner and Skylar Astin for being great in their roles and lending a lot of energy to their characters. Ghosts of War smartly spots these two as the best characters, the most interesting, and puts them in a lot of scenes together. Kyle especially has several scenes that are memorable and scary. His scenes in the attic made me unable to continue for several minutes because it scared me too much.

There is such potential here. I wish that the movie had remained with what it could have been and not strayed. But the parts that showed its potential are worth watching.

If you can accept the betrayal of the shift, Ghosts of War contains enough unfinished nuggets of greatness to be worth seeing.

(Warning: trailer may not be suitable for all viewers.)