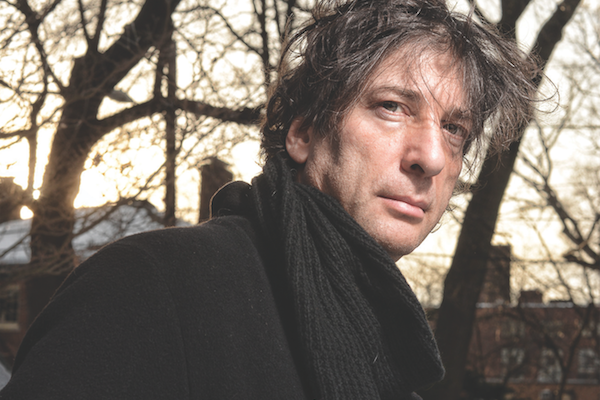 True geeks make their own gear. That’s right, I said it. From homemade cosplay outfits to scale models of the Millennium Falcon, real science fiction and fantasy geeks take pride in making their own homages to their favorite movies, television shows and comics. Some of us fans, however, aren’t all that skilled in the creative department. We need instructions to make our homemade fan gear and, even then, things might get a little messy. That’s where Joan of Dark comes in with her wildly fun knitting guide Geek Knits.

Joan of Dark (a.k.a. Toni Carr) is probably the most badass knitter on the face of the planet. She’s been featured on the DIY Network, written several knitting books, and just happens to party with the likes of Neil Gaiman and John Scalzi. She’s so cool she got A Song of Ice and Fire (the book series on which Game of Thrones is based) author George R.R. Martin, Adam Savage of Mythbusters and John Carpenter to model for Geek Knits. Yes, ladies and gents, that John Carpenter. 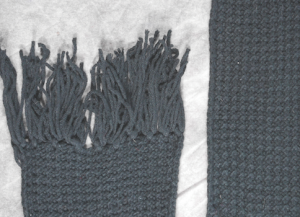 Lured by the hope that I might be able to learn how to knit my very own dire wolf, I took a stab with my knitting needles at Geek Knits. Now, I’m what you would call a knitting novice. I have only the most basic knitting and crocheting skills, which I learned from my grandmother (as is required by knitting law). In the first step of what I suspect will be a long journey in knitting a dire wolf (or six), I selected one of the “easy” projects to get things going.

This Sherlock-inspired design, modeled by fantasy writer Neil Gaiman, was dubbed the “Baker Street Scarf” by Joan of Dark. While I had to substitute the high quality yarn for what I could find in Walmart, the project only cost me a total of $4 and an additional $3 for the knitting needles (which I’ll use on tons of future projects). Below is my completed scarf in blue, modeled here by my completely willing feline companion, Hermann. 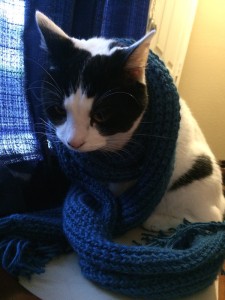 My human deceived me with treats.

Stop eyeing a stranger’s handcrafted Doctor Who-inspired socks or the tiny stuffed dragon perched on their shoulder. You now have the tools to make it yourself. I recommend trying out the Baker Street Scarf to begin with and moving through the projects from there.

My next mission: dice pillows inspired by author John Scalzi! To answer your most burning question: yes, there will be more cranky cat pictures.

If you’re ready to take on the Geek Knits challenge with me, buy the book (now available for purchase here on Amazon) and get knitting! For more from Joan of Dark, you can check out her website here.