Released in 1997, an RPG by the name of Wild Arms stood quietly in the shadow of the do-no-wrong Final Fantasy games, an unappreciated gem of the RPG community. It’s about time that the gem was revealed to a larger audience.

Wild Arms’ plot revolves around the three playable characters: Rudy, Jack and Cecilia. They each carry a heavy burden and are united by a disastrous invasion by near-mythical Metal Demons. With the loss of the royal Tear Drop, the three set out on a journey spanning from spiritual folklore to the mysteries of an ancient war…and beyond.

The game’s positive reception is due in no small part to its characters. Blue-haired Rudy is the silent protagonist, seeking a home amidst people who reject him because of his mastery of ARMs, firearms considered cursed for their destructive potential. Jack is the haunted warrior who hides his pain through a search for ultimate power. Cecilia is the princess who just wants to be a normal girl, fearing that all people see is her station rather than herself. Nothing incredibly fresh, but the piece-by-piece plot progression make learning about these characters worth the wait.

Wild Arms stands out from other RPGs with its puzzles. Each character gains four Tools, special devices that aid the party’s progress. Got a stubborn, impassable wall? Use Rudy’s Bombs to blast a new opening. See a treasure chest you can’t reach? Have Jack throw Hanpan (a talking blue rodent) and he will bring the treasure to you. Screwed up on a puzzle? Activate Cecilia’s Pocket Watch, and time will be rewound. These Tools play a significant role in defining these characters. 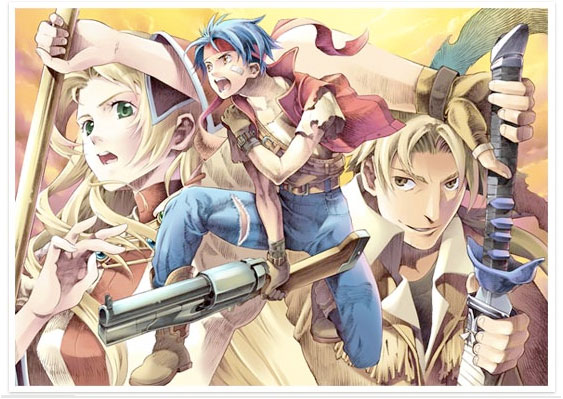 Our heroes also have unique customization systems. Rudy gains a wide assortment of ARMS throughout the game. For a fee, the ARMS can upgrade the number of bullets, obtain power boosts and other categories. It’s worth every penny.

Jack’s specialty is Fast Draw sword techniques. Certain events lead to inspirations of a new technique, which Jack must use a random number of times in order to fully activate. There are seventeen moves total, moves which have MP costs which can be reduced with the Secret Sign items.

Cecilia is the wizard, gaining spells through the use of Crest Graphs. The player chooses what spells Cecilia uses from a four-by-four elemental grid. At first, the spells are weak, but they can be upgraded to higher forms by finding advanced-level sorcerers. By the end of the game, Cecilia’s damage-dealing capacity rivals that of Rudy. That’s no small feat.

Wild Arms does a lot of things that other RPGs don’t. Not just the characters, but their interaction with puzzles, their use of Tools and their special abilities, all congeal to make a fantastic experience that sets the game apart.

If you enjoyed Michael’s arms (kek), you can find the rest of his work right HERE on Sci-Fi Bloggers. You may also check out his personal blog over HERE.