Did you see the wicked trailer for Game of Thrones season five? So maybe it was a few short seconds from an HBO teaser for 2015, but still. We’ll take what we can get, right?!

The show will air on HBO sometime in the spring of 2015, and that’s just too far away. If you want to get your hands on a fresh take of George R.R. Martin’s spectacular work, then I highly suggest picking up Telltale Games’ Game of Thrones for Xbox One and 360, PlayStation 3 and 4, OS X, Microsoft Windows, iOS and Android.

Telltale released both seasons one and two of The Walking Dead and Tales from the Borderlands. The games are usually released as episodes and build up to a season. Game of Thrones’ first chapter, Iron from Ice, was released December 2nd. The second chapter, The Lost Lords, is looking to be released sometime in January.

In the game, you take on several roles from House Forrester, loyal banner men to House Stark. The game doesn’t go beyond the show, but embraces it as the War of the Five Kings heats up. 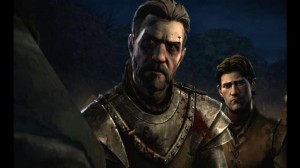 If you’re not familiar with Telltale, then you should know they develop point-and-click adventures where decisions decide how the game is played. Ah yes, the decisions. Telltale does a wonderful job of setting up situations that you will think about hours after you’ve clicked a button. A little after you’ve started your journey, there’s a simple title screen that makes you think, “Oh no…” Instantly, you feel the gravity of the game, and it’s incredible. Decisions are also time sensitive. You don’t have all day to decide the pros and cons of your actions, you just have to go for it. Fifteen minutes in my head hurt and my heart was heavy, but maybe I should have expected it, because in the Game of Thrones, you win or you die.