“This hand of mine is burning red! It’s loud roar tells me to grasp victory!”

These are the words uttered by Domon Kasshu in Mobile Fighter G Gundam again and again as he defeats his opponents in a fiery explosion, words that still bring a smile to my face.

Like many young boys growing up in the 90’s and early 2000’s I was a big fan of Dragonball Z and the action anime block Toonami on Cartoon Network. Everyday upon returning home from school I would rush to my television set and sit there for hours absorbing everything that came on the screen. Everything from Dragonball, to Sailor Moon, I would watch. I also watched Gundam Wing, and while I enjoyed it at the time, many of its themes and deeper meaning were lost to me. Maybe that’s why G Gundam grabbed my attention. Here is a show I can get into! Guys battling other guys in giant robots in a tournament taking place on the ruins of old Earth, each country’s representative fighter duking it out for glory and honor. 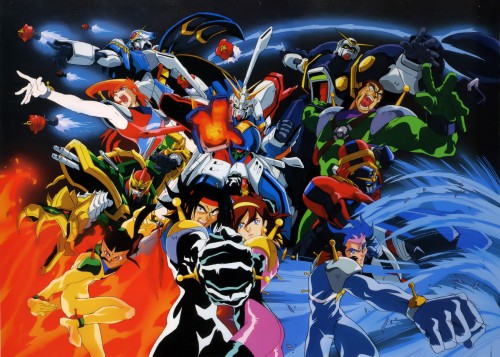 In fact my favorite part of the show was meeting and learning about the various fighters. Each character’s Gundam is incredibly unique and represents their respective countries. George de Sand for example, the representative from Neo France, fought in a Gundam dubbed the Rose Gundam, which wielded a rapier. George even had a butler that piloted his own butler mech from time to time.

As each fighter fights for his or her country, a deeper plot begins to develop with Master Asia and the Dark Gundam. Domon searches for his brother, who he believes to have created the Dark Gundam and betrayed Neo Japan. In actuality, the Dark Gundam was originally a machine made to restore life to the now barren Earth, but was corrupted. It then consumed Domon’s brother and now seeks to destroy mankind. When Domon’s mentor, Master Asia joins the side of the Dark Gundam, Domon and his friends are up for a real challenge.

The show is ridiculous, but so much fun. Gundam Wing is a very serious show, an excellent one, but there aren’t many happy or goofy times. G Gundam is the exact opposite, a fun, silly action show that at times delves into darker and more serious territory, especially towards the end. It differs wildly from other Gundam iterations, focusing on personal duels rather than large scale military conflicts, as well as having voice activated super powers akin to Dragonball Z, such as Domon’s signature burning finger. Heck,  all the pilots dress in skin tight motion capture suits to control their Gundams, as the giant robots mimic the motions of their human counterpart. Despite its many differences from the regular Gundam continuity, G Gundam still delivers what I personally believe to be the most important quality of a Gundam show – giant robot action. And in that department, it delivers in spades.