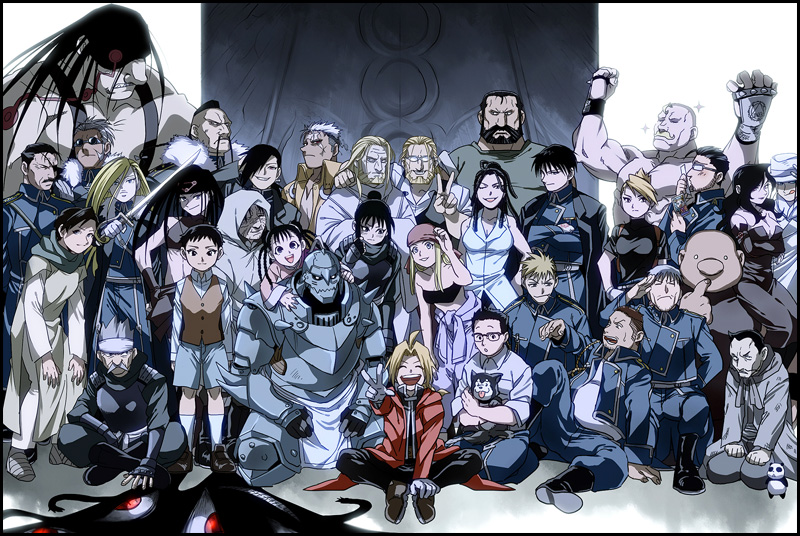 Fullmetal Alchemist was originally a manga, though now it has been adapted into an anime twice.  The story follows Edward and Alphonse Elric, who try to bring their mother back to life using the science of alchemy.  Something goes terribly wrong however, and Edward loses his leg while his younger brother Alphonse loses his entire body.  Edward gives up his arm in order to bond his brother’s soul to a suit of armor.  The brothers then begin searching for the ever elusive philosopher stone in order to get their original bodies back.  Along the way they meet all sorts of characters, as you can see in the picture above.

The original anime adaptation of the series greatly diverged from the events within in the manga.  While a good anime, it just lacked some of the power of the original story.  Fullmetal Alchemist Brotherhood remedies this fact with a well told story that constantly throws more at the watcher.  There are a lot of characters, though I never found it hard to distinguish them.  Things make a lot more sense in Brotherhood; I’m sure a lot more time was put into working the plot and the devices vested within it than with the first anime.

Fullmetal Alchemist Brotherhood is set within an industrial era in every way except for the concept of alchemy.  This is not magic however.  It is a science that manipulates elements, etc.  It allows a block of stone to be formed into objects.  It allows the user to fix things like radios.  Of course, like any powerful science, there is a darker side.  Alchemy can be used for combat very easily.  There are alchemists employed by the military, to great effect.  For example, Roy Mustang, the flame alchemist, can cause massive fiery explosions at will by snapping his fingers.

Fullmetal Alchemist Brotherhood is honestly one of the best anime I have ever seen.  It has everything a viewer could want.  It has comedy, action, a sense of struggle, romance, and everything in between.  It also does a good job with character development, such as establishing manners for Major Armstrong (top right in the picture).  He is always ripping his shirt off and saying ridiculous things, which leads to plenty of laughs, let me assure you.  However, when a character you expect to be goofy is suddenly serious, it lends a lot of power to the moment.  Armstrong is just one example of good character design and execution.  The series is full of it.

The story advances very quickly.  I found that it is just a long story that absolutely needs every episode within it.  There weren’t any long and tedious flashbacks to drag the series out.  At the same time there is a steady build towards the climax, which takes place in the last few episodes.  I never felt bored or uninterested by the plot, which was always progressing towards the final confrontation.  The danger was always increasing, the stakes higher, and the show certainly doesn’t pull any punches as it strings you along for this thrill ride.

I would highly recommend watching Fullmetal Alchemist Brotherhood.  If you’re an anime fan then it is a must see.  Don’t be discouraged if you didn’t like the first anime.  I didn’t think it was that great either.  However, if you just watch the first episode of Brotherhood, I’m sure you’ll be hooked just like I was.  There isn’t a single thing about Brotherhood that isn’t better than the first anime and I think you will agree if you just take the time to check it out.  I honestly wish it was longer so that I could still be watching that incredible story unfold.  They left a bit of room in at the end for more adventures, so perhaps we will see a sequel, which could be very interesting and exciting indeed.