Fans of the Assassin’s Creed series have been waiting a long time to hear anything about the franchise’s live-action film. It was announced back in October of 2011 that studios were looking to pick up the tab on the movie and only now are we seeing the first official images. 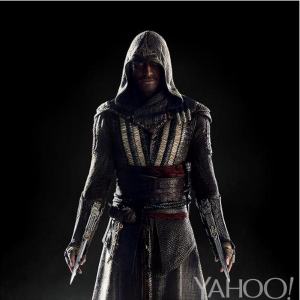 Yahoo exclusively revealed actor Michael Fassbender in his get up as main character Callum Lynch. Lynch is not a name fans will recognize as he was created specifically for the film, but does exist in the realm of the game. Lynch learns that he is actually a descendant of the secretive Assassins society and gains insightful knowledge and masterful skills through the memories of his ancestor, Aguilar, from the 15th Century. Fassbender will also portray Aguilar in these memories.

The film is being released on December 21st, 2016 by 20th Century Fox and New Regency with Ubisoft Motion Pictures, and filming commenced quite recently. Also appearing in the action adventure flick are Dark Knight Rises star Marion Cotillard and The Wire’s Michael Kenneth Williams in, as of now, undisclosed roles. Directing is Justin Kurzel, who is just recently helmed the film Macbeth, also starring Fassbender and Cotillard.

So series fans can expect a special gift around the holiday season next year, but they won’t have to wait long for the next installment of the game. Assassin’s Creed Syndicate will be released on October 23rd for the PS4 and Xbox One. The story allows players to switch between two main protagnoists, twins Jacob and Evie Frye, as they slither through London in 1868 to take on the Templars. This week, Ubisoft dropped the London Horizon trailer. The teaser shoes the bustling city at the end of the Industrial Revolution and the twins zipping around, posing to take down the dark underbelly. Check it out.

If you enjoyed Carly’s creed, you can find the rest of her work right HERE on Sci-Fi Bloggers. You can also follow her on Twitter @MrsCarlyRodgers.