Loot Crate seems to have a great thing going. Each month they pack up boxes full of treats like t-shirts, cool collectibles and awesome accessories for geeks and gamers around the world. So how does a company like that get any better? They produce a 15-minute Firefly short film. 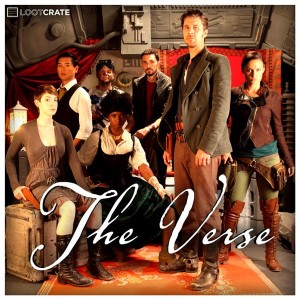 Of course it’s not exactly Firefly. The short is titled, “The Verse,” and the crew travels on a ship called the Overland. Obviously, because it’s not a product of Fox, the character names are different, but they very clearly represent members of the ship Serenity. According to Loot Crate’s YouTube page, the piece was created by fans, for fans, and is an “exciting look at this world featuring a new crew, a new ship and a heaping dose of misbehavin’!” The acting is great, the visuals are stunning, and the comedic timing and story feel very faithful to the realm created by Joss Whedon. The original Firefly ran in 2001 and aired only eleven of its fourteen episodes on Fox. After being released on DVD, the series found a cult following and Whedon was able to make a movie, Serenity, as a continuation of the story.

The short also features goodies for those who are a part of the Firefly Online game community. Players can unlock and play the Overland in the game, and in an upcoming Loot Crate, a Firefly Online art card will feature a digital code on the back and will unlock a bunch of exclusive gear for the game.

You can check out “The Verse” right here.

Although the show may never make a comeback, it’s very evident that Browncoats are everywhere, and they are still flying. If you want to see more of what Loot Crate is doing, check out their site, or their YouTube channel. The Firefly Online game can be found right here.