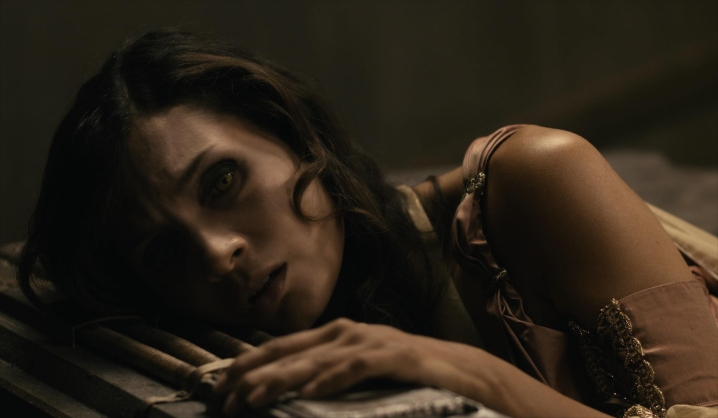 There is none. There is no feminism in Metal Hurlant Chronicles. Female characters are reduced to being sexually exploited tropes with absolutely no substance or characterization that would enable them to contribute to the plot of an episode.

As I’ve mentioned in previous MHC recaps, women are portrayed as either sex symbols, damsels in distress, or aggressors.

The sex bit, I’m sure, is obvious and expected. Metal Hurlant Chronicles is a television adaptation of a 1970s comic series of the same title. Let’s not forget that this was also originally a French show and comic. Syfy managed to edit most of the boob flashes and cut down the sex scenes. It’s understandable that ideas about sex and nudity are different once you get across the pond, but ideas about gender equality are pretty much the standard these days. I have to call the creators or the director or whoever out on this. There was no point. Females were highly sexualized, and it contributed absolutely nothing to the show. 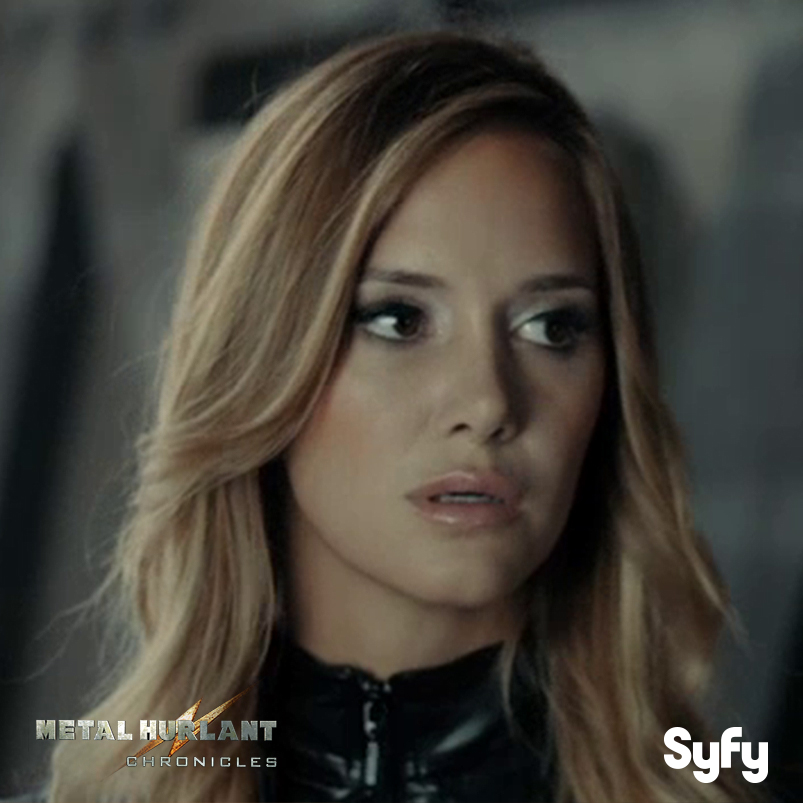 If Guillaume Lubrano was the ground beef, the male actors were the buns, and the creatures were the toppings to this Hurlant burger, women were the refrigerator. Sure, you need the fridge to keep all of the condiments and ingredients nice and cool until you’re ready to cook, but what if you don’t need to do that? What if you start cooking your burgers the minute you get home from the grocery store? What exactly do you need the fridge for? The refrigerator doesn’t play an intricate part in this scenario. It’s just a box to glance at while you scarf down your meal. My biggest question is how can the creators of MHC give women such mediocre and miniscule parts, but base much of the success of the show on their exploitation?

As I become more and more acquainted to movies and shows in the sci-fi genre, I’ve seen this quite a bit. Women are definitely marginalized and often exploited. Don’t believe me? Take a moment to list 5 films/shows that you’ve seen where a female character was scantily dressed or contributed nothing to the whole of the movie.

I think that has to do with the belief that science fiction is geared towards a predominantly male audience. Completely wrong. In 2014, and even in 2012 when the show first premiered in France, there’s no excuse for this type of sexism on any television show. Two words: Doctor Who. Doctor Who is a European show with numerous empowered female characters who are leaders, who are partners to their male counterparts and are vital to the premise of the show without taking off their clothes. Another show is Orphan Black, where the lead character and the most of the main cast is female. So MHC, what’s your excuse? 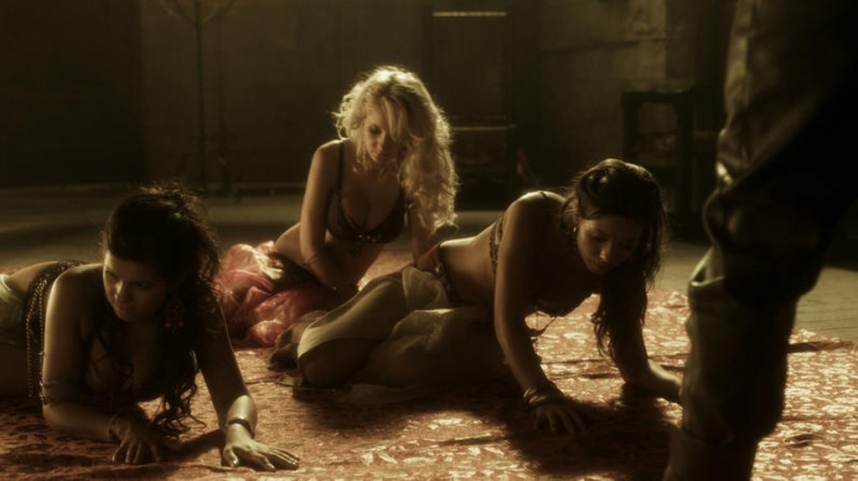 It’s not as though the positions weren’t available. In “The Loyal Khondor,” one of the notable females in this episode was Princess Alaria (Marem Hassler). She was slowly dying from a disease, and Khondor, her faithful servant, went on a journey to find the cure. When he returned, he told her that his blood was the cure, so he killed himself and she drank his blood. Classically a female role in MHC, Alaria had close to no lines and she spent the majority of this episode completely famished, sprawled out on a couch. I suppose it’s because she was dying, but here was an opportunity for MHC to take her character and make her vital, make it understandable why Khondor committed suicide to save her. Why did she need the Khondor to save her? She could’ve saved herself. Alaria was actually dressed pretty decently compared to other women on the show, she had a noble title, and all it would’ve taken was more speaking and the elimination of that weird sexual tension between her and her father (Marc Duret). In fact, there seemed to be sexual tension between her and Khondor as well. Why does there have to be any sexual tension? Women aren’t just there for you to poke.

In “Three Men on a Match,” Yasmine Lafitte played a captain who beat her inferior officers until they complied with her sexual advances. The captain was aggressive, forceful, and while she was in a position of power, she clearly abused that power to feed her own desires. To show us how irrelevant the captain was to the episode, the ship that she was commandeering was blown to smithereens, killing her and her officers within the first few minutes. So, not only was she a rapist, but she was also careless and under-qualified, because if she had been focusing on her job, she would’ve had time to perform the necessary procedures to fix the reason for the explosion or to evacuate the ship. So, am I to believe that these are accurate representations of women in power? 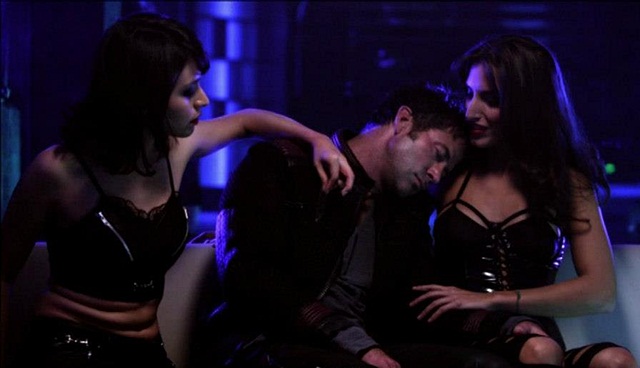 I hear your dissent already. “But Keyoka, what about the woman (Lygie Duvivier) in ‘Second Chance’ and Skarr (Kelly Brook) from ‘Master of Destiny’? They had a major parts with dialogue and both were depicted a strong, independent female.” You’re right. Very right. Only, how come the nameless woman didn’t have a name? How come she had to be a prostitute that  took pleasure in emasculating a man, much like the nameless captain in “Three Men on a Match.” And how come it was eluded that she was Eve at the end of the episode? No one wants to be Eve. After the whole forbidden fruit situation, I’m pretty sure Eve didn’t even want to be Eve. She single-handedly ruined paradise and pissed God off at everyone. And sure, Skarr talks, but she only has, what, two sentences? Most of both ladies’ camera time is spent naked or in a provocative outfit. It’s as if MHC has to make up for creating strong-minded female characters by devaluing them with lack of clothing. Also, fine, they both had significant roles in their episodes, but they were still marginalized. Men were very much the stars of those episodes, and all of MHC’s episodes. The women only appeared in the later portions, and they had nothing to do with the basis of the episode. The storylines revolved around the male characters. The women were just there like props, like…a refrigerator…

The writers of MHC must understand that female behavior isn’t so black and white. No one is. For this show to be successful in the future, there needs to be more time spent on character development and variety. Thirty minutes is a long time spent crafting a storyline and a straight to the point personality for male characters. The same can be done for female characters, just saying.