June (played by Jenna Elfman) watches a recorded interview of John (played by Garrett Dillahunt) talking about their relationship. June sends a message over the radio for him asking how he was so sure while musing that she doesn’t always have that kind of faith. With the storm over she and Althea (played by Maggie Grace) spend several days by the truck waiting for a response.

Morgan (played by Lennie James) also tries to reach the others, June gets a shaky reception but doesn’t know it’s him; with the truck low on diesel she persuades a sick Althea they should go to higher ground to get so they find a car and head out. Morgan leaves his new traveling companions in the truck when he faintly hears June on the radio to find better reception. Althea starts to get very sick but she puts off June’s concerns when someone drives off with her truck. When they blow a tire in the chase June wants to give up to find Althea antibiotics and Althea says she has some in her truck. Morgan finds the Mystery Woman (played by Tonya Pinkins) from the last episode picking through a box of supplies on the side of the road, she isn’t very social so he leaves her. June tries to fix the car but when they hear the truck’s guns firing nearby Althea begs June to go after it on foot. June finds the truck but is immediately caught by the Man (played by Charles Harrelson) who took it. She tries to convince him they can work together but when he refuses she disarms him and takes back the truck but finds it out of gas. 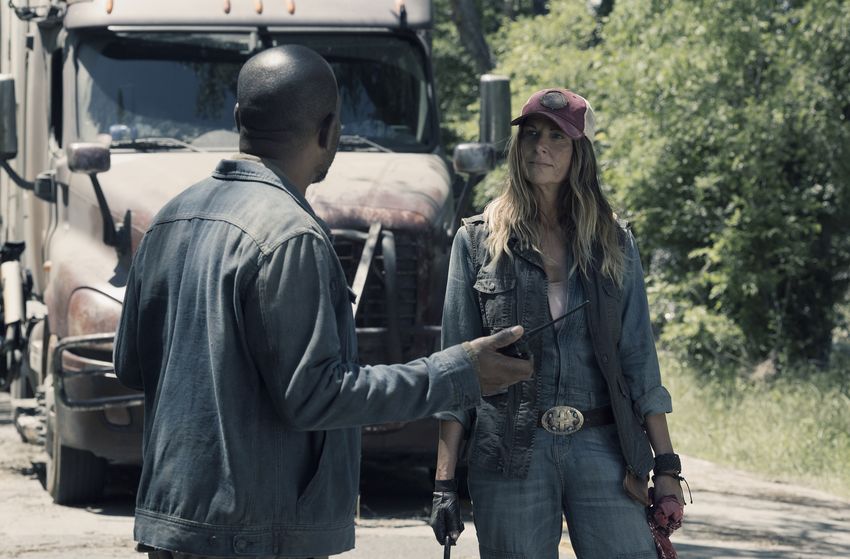 I can’t get a signal.

This Mystery Woman keeps popping up and while she appears benevolent her eyes show a dangerous persona lurking underneath. She doesn’t have the behavior of a typical villain but at the very least she will pose a problem for the group when she runs into one of them again. June and John spent most of the first half of the season separated and now after a brief reunion they’re back in the same cycle although one of them dying is very unlikely.

Given that the main plot is the group separation it works for now but we after investing so much time in them, it’s only natural we should see their relationship develop. Althea is so attached to her truck but felt okay leaving it abandoned with the keys in the ignition, that’s a rookie mistake for any car owner. Even though Althea’s main motives are surely her tapes an armored truck fitted with machine guns is not something you want to lose. She tried to reason with that guy but it’s hard to trust new people especially when you’re pointing guns at each other.

June can’t find the medicine and the Man claims he never took any, she forces him to leave over his protests saying she gave him the chance to join them. She radios Althea but she collapses from fatigue, after nearly being killed by a walker Althea radios June and says there is no medicine, she just said that to get her truck back. June reunites with Althea having luckily found stray antibiotics on the truck but is furious Althea lied and put her life at risk. June demands to know why the truck is so important and Althea says it’s because of all the stories she collected. Not all of them were from strangers, some were collected from people she knew and loved.

Morgan finds a water tower and tries one more time to get out a message, Althea and June hear it but the battery dies before they can respond. June decides to drive to his location hoping to catch him before he leaves but Althea refuses to leave her truck. June tells Althea that the people on the tapes are gone, but their friends are alive and she relents and goes with June. 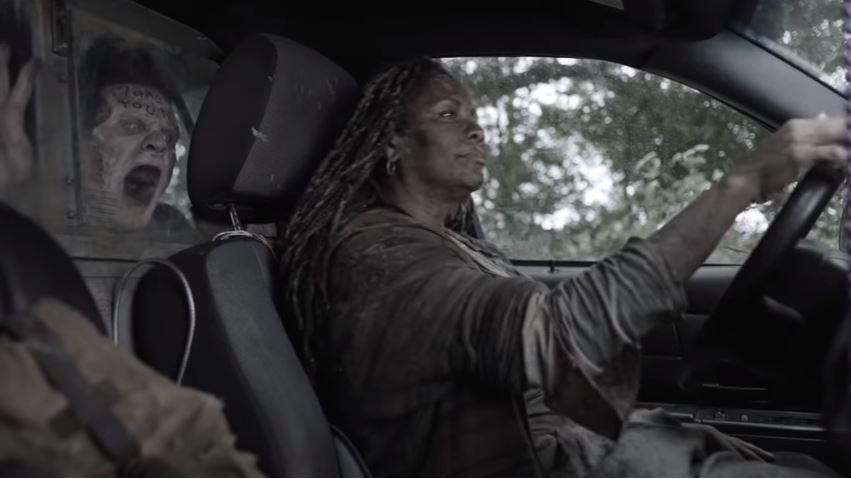 She’s not quite all there.

This episode provided some backstory on Althea regarding why she loves her tapes, and though the overall story was great I hoped this episode would focus more on her and June. Several other characters had their own episodes that furthered their characters and I wanted to see that for Althea and June. Who were some of the people on Althea’s tapes and what happened to them? Questions that could have easily been answered if they had more screen time. June was furious that Althea lied about the medicine but the underlying anger was that she lost her daughter while out retrieving medicine. June was clearly reliving that but it was never talked about, first that was mentioned way back in the beginning of the series so reestablishing that would have been good. Second having June talk about that experience again would have made her heated argument with Althea much more charged.

June and Althea catch up to Morgan just before he and the others drive off, feeling guilty about forcing the Man to leave and sends out a message for him. He responds and says he found diesel for Althea’s truck and say his name is Quinn. Quinn radios to June believing he found their location on the highway but realizes someone changed the sign, he’s than ambushed by the Mystery Woman who lets her pet walker kill him. The woman takes the truck and releases the walker then ties up the reanimated Quinn as her new walker companion.

Just when you thought everyone was safe and happy you get a reminder that this is Walking Dead. Quinn wasn’t built up into an actual character (we didn’t even learn his name until just before he was killed) but his death is more about June and the Mystery Woman. June will feel guilty about having turned him away and it can impact how she deals with people in the future. We also know this Woman is clearly disturbed and will be a major problem for the group very soon especially now that she’s packing serious heat.

The Mystery Woman fawned over the reanimated Quinn like he was a newborn, it was creepy yet oddly sweet but mostly creepy.

“I know the look of a man who needs a drink.”

Who will Althea be if she’s unable to get her truck, or more importantly her camera back?