Nick (played by Frank Dillane) wanders the streets collecting walker heads in a shopping cart and sells them to the man who sells brain stems for adrenalin rushes. Troy (played by Daniel Sharman) warns Nick that he’s heard around the trading post that an attack is planned for the dam.

Madison (played by Kim Dickens) mourns the loss of family traditions, Strand (played by Colman Domingo) says it’s still possible but she reminds him her children have left her. Alicia (played by Alycia Debnam-Carey) and the woman (Played by Edwina Findley) are run off the road and attacked by a group of men, they gain the upper hand and Alicia lets them go. Nick and Troy warn everyone at the dam of the coming attack and Daniel (played by Ruben Blades) prepares to defend the dam and wire C4 to blow it in case they can’t. Walker (played by Michael Greyeyes) and Crazy Dog (played by Justin Rain) decide to head north in hopes of finding more of their people.

Alicia gets the woman medical help at the trading post and the doctor asks Alicia for help with a surgery. Strand admits to Nick he made a deal with the Proctor to let them in the dam in exchange for protection for himself and Madison’s family. Daniel asks Nick for information about how Ofelia (played by Mercedes Mason) was bitten, but Daniel can tell Nick is lying and prepares to interrogate/torture him. 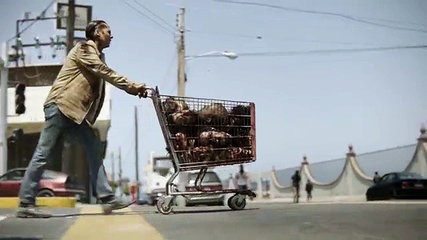 Won’t find this at Costco.

Nick looked tempted by those brains even though it meant possible infection, going to save his mother saved himself as well. Alicia getting drawn into becoming Eddie’s surgical assistant feels forced especially since she clearly has no training. The mystery woman Alicia has been working with was quickly written off with little regard. Their partnership was being built up but since she was never even given a name it’s safe to say we won’t be seeing her again. Walker and Crazy Dog were also written out very quickly but them wanting to avoid a war at least made sense.  However it was an anticlimactic end for two characters who were such a big presence all season. The fight for the dam is definitely the most exciting thing we’ve seen at this setting but the fact that they lined it with C4 made it almost certain they would fail. Why make a big show of setting all these explosives if we aren’t going to see a huge explosion?

While setting C4, Troy talks with Madison to make sure they can move past everything that happened to move forward together. The doctor introduces Alicia to Proctor John (played by Ray McKinnon) who runs the trading post. He needs surgery for a growth on his spine and warns Alicia that if he dies his men have orders to execute them. After extensive interrogation Nick convinces Daniel that Jake (played by Sam Underwood) brought on the horde that killed Ofelia.

While the doctor performs the surgery Alicia tries to keep the Proctor distracted since anesthesia is too dangerous. Nick tells Madison about Strand’s deal and when pressed Troy admits to leading the horde to the ranch. Troy reasons that the Indians ‘stole’ his ranch and enraged that Troy lost her the ranch after she lost so much already Madison kills him with a hammer. The surgery is a success and John immediately prepares to invade the dam and ‘invites’ Alicia with him. Lola (played by Lisandra Tena) and Daniel realize the water in the dam is flowing the wrong way but are held at gunpoint by Strand. 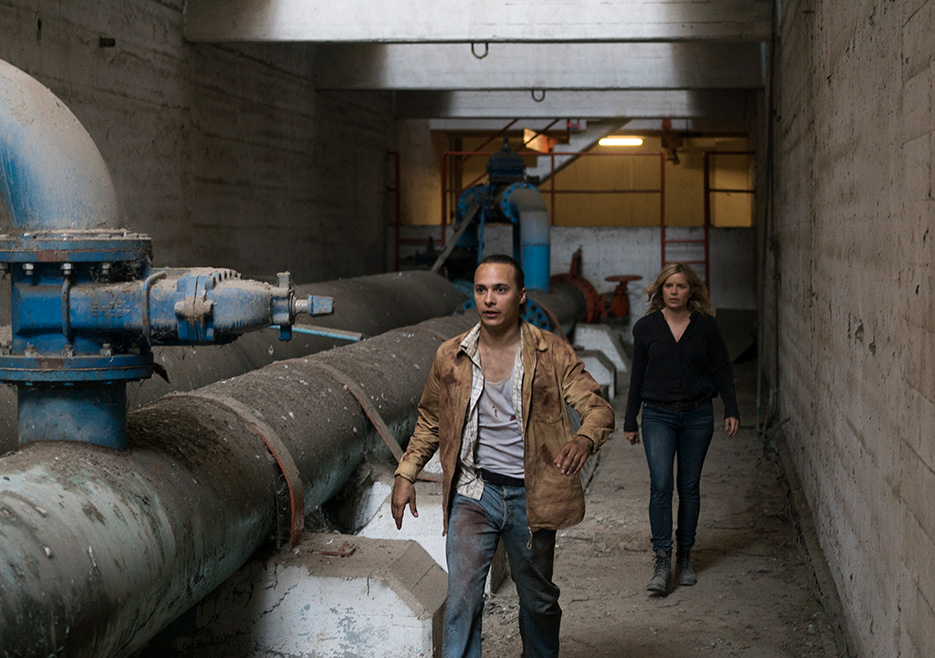 Time to get the hell out of here!

Troy was laying groundwork with Madison because he knew she would be pissed if she found out what he did, unfortunately he didn’t realize just how mad she could get. Troy’s time on the show was short and bittersweet, he was a complex character who was fun to watch but if anyone deserved to die he did. It would have only been more satisfying if Daniel got his hands on Troy and worked his brand of torture. But given how easily he believed Nick and was reluctant to hurt him Daniel looks to be softening up a little. Instead of helping in a surgery Alicia is made a bedside babysitter for Proctor John, the head of the trading post and our new villain. He’s clearly a go-getter because just minutes after a major surgery he is ready to make some trouble. Proctor John is much needed for the story because once Troy died there was no antagonist heading into the rest of the finale.

Strand admits his betrayal but Daniel doesn’t believe Strand has it in him to kill someone, they fight for the gun and Daniel is shot through the cheek. Proctor John’s men invade the dam through tunnels and begin killing the workers. Strand hides Madison and Nick by locking them in a room and takes the detonator with him. What was supposed to be an easy takeover quickly turned hostile but I didn’t expect anything less. Since we rarely spent time at the dam watching the workers be shot and/or rounded up for execution had little impact. But the real drama is waiting to see if anyone else died (anyone who matters to the story at least).

Strand should have killed Daniel because if they ever cross paths again Daniel will shoot without hesitation.

“You got Jake killed, you got them all killed. You had no right.”

Nick was probably so upset with Troy’s death because all his work covering for him is now a wasted effort.