Daniel (played by Ruben Blades) goes out disarming stores with booby traps set up by whoever owned the warehouse before, seemingly feeling alone without any human contact. Meanwhile, Charlie (played by Alexa Nisenson) sneaks into his compound on Strand’s (played by Colman Domingo) orders. Charlie ducks into Daniel’s car when he comes out searching for his cat but unfortunately for her Daniel takes the car out.

The next day Strand, Sarah (played by Mo Collins) and Wendell (played by Daryl Mitchell) try to take a plane but find the instrument panels missing. Daniel anticipated Strand’s plan and knew Charlie was in his truck, while he doesn’t plan to hurt her, he wants to ‘save’ her from Strand. Meanwhile, Morgan (played by Lennie James) and Alicia (played by Alycia Debnam-Carey) grow worried when the others are still out helping Dwight (played by Austin Amelio) search for his wife Sherry. They tend to Dylan (played by Cooper Dodson) who leads them to believe the camp of the people laying walker roadblocks is in the woods, unaware he’s playing double agent for his siblings who are actually doing it. Dylan contacts his siblings Annie (played by Bailey Gavulic) and Max (played by Ethan Seuss) while he’s alone, their setting up another walker roadblock and hide from someone in the same armor as the people who took Althea (played by Maggie Grace). 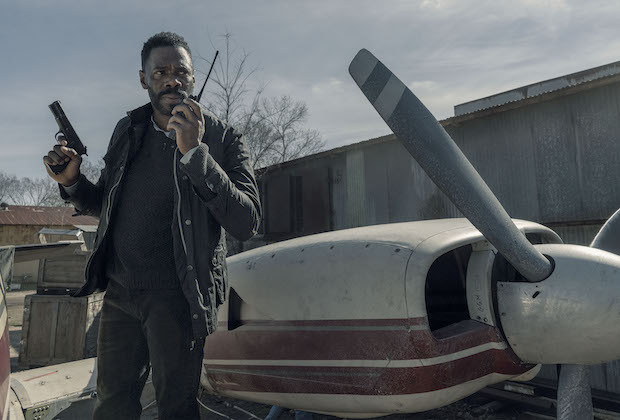 Not cleared for takeoff.

There was a lot of espionage with the kids this episode but, clearly, they need more time to refine their skills. You can’t really blame Charlie too much since Daniel is a very cunning man who is always three steps ahead of everyone. His issues with Strand will have to be resolved, though, because a season of Daniel alone with his cat is not good television. Dylan has everyone fooled but you can see in his face the kid is cracking under the pressure either because of the stress or the guilt (maybe both). The real bad guys (and the bigger story) is these uniformed people; keeping them shrouded in mystery has built up the suspense but enough is enough. At the very least we need a name or a face for these people because the storyline is starting to grow stagnate.

Daniel takes Charlie to another store and she helps him try to disarm it, but the walkers inside set off the machine gun and free the walkers. Dylan confesses to everyone that he lied and begs Morgan and Alicia to find Annie and Max; Annie hurts her ankle when the walkers on their roadblock break free. Daniel and Charlie lure the walkers back to the warehouse but when they learn Strand and the others broke down the fence, Daniel has Charlie drive ahead and uses a boombox to lure the walkers away. Daniel forces Strand to admit to the others why he’s angry: because Strand lied and kept Daniel away from his daughter Ophelia (played by Mercedes Mason) and he was too late to see her before he died. Unable to leave Daniel to die Sarah and Wendell drive Althea’s truck to him to kill the walkers with the machine guns, but they malfunction leaving them trapped. Morgan and Alicia save Annie and Max from the walkers but end up surrounded by armed kids. 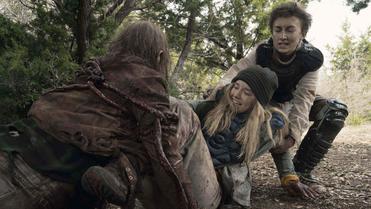 Dylan finally cracked albeit to save his brother and sister, but they are clearly not feeling thankful. I do like the idea of an army of child soldiers taking on these mystery people it could be like a Red Dawn kind of situation. It’s ironic that once Daniel decides to be a team player anything that could go wrong does. His grudge against Strand is understandable but I think he expected the others to be upset but they were barely fazed. I mean at this point nobody has a spotless past, short of finding out Strand massacred a whole bunch of people nobody was going to judge or disown him. But at the very least getting it all out in the open will pave the way for Daniel and Strand to maybe trust each other a little; being friends is way too big a stretch.

Strand arrives in another truck carrying the plane, after getting their attention he lures the walkers to the plane’s blades, but it fries the engine; a grateful Daniel decides not to shoot Strand in the face. Dylan tells Annie they can trust Morgan and Alicia and they lower their guns; Morgan questions them and finds out whoever the other group is killed all their parents. They stay in the area because they don’t want to leave their parents behind, something Morgan went through with his wife and son. The group then hides when they notice a helicopter taking off and it appears whoever the uniformed people are, they have decided to leave.

There has been some cool walker kills, but, using the plane, that was visually amazing, and, true to form, Daniel’s ‘thank you’ is to not shoot Strand…at least for now. After learning the sad backstory of all the kids, it’s finally decided to act and confront the bad guys! Unfortunately, the bad guys finished whatever they were doing and are heading off to who knows where. Hopefully, Althea escaped because I’d hate to lose her, her absence has been felt the last few episodes.

“Does Strand usually send kids to do his dirty work?”

With all the delays happening on the plane wouldn’t it be easier to just drive to where Morgan and the others are?

“You have no idea what’s going on here.”

That is one talented cat.