Madison (played by Kim Dickens) comes across Althea (played by Maggie Graec) and attempts to steal her truck, Madison ties her up but Althea refuses to give up the keys. Althea tries to offer Madison supplies for an interview but Madison doesn’t budge; Althea breaks free but Madison knocks her out and steals her tapes.

Madison looks through all the tapes hoping one might be of her children and breaks down when none are; Althea than finds and captures her. The scene cuts to Althea, Morgan (played by Lennie James), Naomi (played by Jenna Elfman) and Charlie (played by Alexa Nisensen) at the stadium while they try to get medical supplies to save John (played by Garrett Dillahunt). Making Charlie film everything Althea uses the machine guns to cut a path for Naomi and Morgan to get to the infirmary. They make it but are nearly killed by a grenade fired by Alicia (played by Alycia Debnam-Carey), who arrived with Strand (played by Colman Domingo) and Luciana (played by Danay Garcia) who are still out for revenge. Worried he might die John records messages for Naomi and Morgan begging that they don’t continue to run from people. Morgan and Naomi locate the supplies they need but Luciana uses the rocket launcher to blow off a door on the truck.

First Alicia threatens her and then Madison steals those precious tapes; Althea doesn’t have the best first impression of this family. At first glance it seems Madison is alive and well and coincidently met Althea while looking for her family, but that’s way too simple. You may have noticed the past and present scenes have very different color schemes and the Althea/Madison scenes are presented in the lighter color scheme of scenes in the past. Obviously they don’t want to reveal Madison’s fate too quickly in the episode. John leaving his potential last message to Morgan and Naomi was very poignant especially in a scene with so much raw rage. Alicia is a woman out for blood and you can see that rage in her eyes fueling her; she thinks Naomi betrayed her and true or not she needs something to channel that rage. 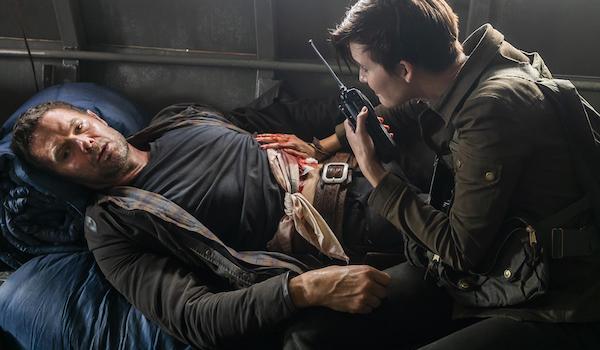 Althea has Madison tied up and interviews her; Madison questions why it matters and Althea recalls how her interviews with a villager about a warlord who terrorized them. Althea made them realize the warlord didn’t have the power he boasted and they rebelled; the truth literally set them free. She tells Madison one day someone might be interested in her story and Madison starts talking. Madison wanted a place where her kids wouldn’t have to things like she tried to do with Althea. Madison recounts when they were little they found an injured bird and nursed it back to health for weeks even when it seemed bleak. The bird lived because they refused to give up and Madison wanted a place where they could have that kind of hope again.

Back at the stadium Alicia threatens Charlie to force Althea to convince Morgan and Naomi that it’s safe; John turns on a walkie to warn them and Althea attacks Alicia. In the ensuing struggle Alicia notices a food package and asks where Althea got them; she traded them for an interview and Alicia finds the tape of Madison. Alicia confronts Morgan and Naomi at gunpoint claiming Madison is dead because of Naomi.

Althea and her camera have been a great plot device so far and though she seemed too attached to it this episode showed us why. She’s used her power as a journalist to help people before and wants to use that power in some way even during the end of the world. Similarly Madison was obsessed with finding a place for her family which is understandable but we get to see the motivation for that. Madison is willing to do things like rob Althea for her family but wants them to live somewhere where they don’t have to do that.

Every day Madison sees her kids lose more and more of their innocence in this new world and she’s desperate for them to hold on to a piece of that. Seeing that message clearly moves Alicia because even when she finds Morgan and Alicia her whole demeanor is different. It’s almost like she’s continuing with her plan because that’s what she feels needs to be done but the rage that was in her eyes is gone.

Naomi tries to reason with Alicia that she once helped Naomi but Alicia claims she isn’t that person anymore. Morgan gets between them and tells Alicia that he tried running from people but things changed, and they can change for her. He wasn’t able to get through to Nick (played by Frank Dillane) but he knows Alicia is a good person; she breaks down in Morgan’s arms while Naomi saves John. In a flashback Althea gives Madison supplies to find her family; they were separated after a place they found was overrun by walkers. Madison finds them and shows them the stadium saying it can be their new home. Because Althea helped her when she didn’t have to Madison thinks it’s time they do the same and thinks that will help them build a stable and safe place. In the present John recovers and Naomi reveals her real name is June. Althea asks what happened to Madison so they pull over for the night to give her the last part of the story. 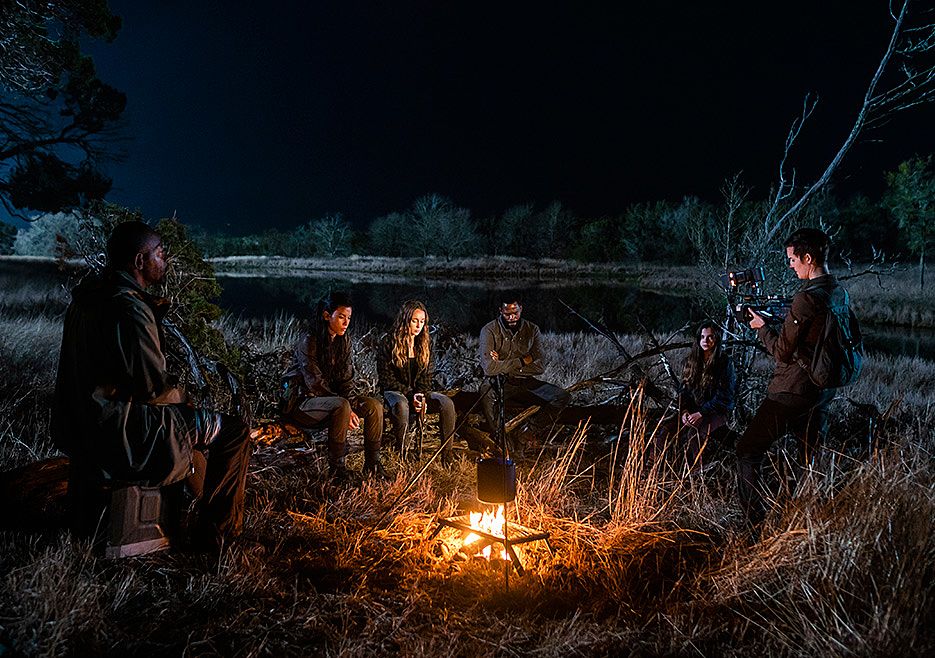 Naomi opens up about her real name but I’d still be cautious; after a few months she could go ‘now that we’re serious this is my real name’. Morgan had to run halfway across the country but he’s finally accepted that he can’t not be around people. He allowed Nick to give in to his rage and he was killed because of it so in Morgan’s eyes he was really saving Alicia not Naomi. Althea’s kindness gave Madison the idea of turning the stadium into a home and changed her outlook of herself and her family first to helping people. As the episode drew to a close it began to look less and less likely that Madison would suddenly appear alive and well. There was perhaps the hope that Madison might reappear later in the season but Madison’s fate took a different turn.

Alicia, Strand and Luciana recount what happened; Madison, Strand and Luciana saved Alicia and Nick from the walkers but everyone in the stadium got into their cars to flee. Mel (played by Kevin Zegers) took their car but Charlie says he saved her from being overrun. Naomi couldn’t convince them to stay and had to run from the walkers; she joined the Vultures because she thought they were dead and it was her only choice to survive. Meanwhile the walkers close in on everyone in the cars so Madison uses a flare to lure them all into the stadium and trap them and allow everyone to escape. There were too many remaining outside the Stadium and Madison was unable to escape; she locked herself and the walkers in the stadium. Madison uses the walkie to say goodbye and tell them to stay who they are before using the flare to set the walkers on fire.

Madison’s death was always going to be hugely impactful but more so because Nick was killed just a few episodes ago. With Madison the lead character now gone it leaves everything feeling uncertain; perhaps the rest of the original characters will die and the new ones will inherit the show. While we don’t see Madison die on screen it’s very doubtful she survived the blaze, and though people might welcome her resurrection her death was very meaningful. She died not only saving her family but saving everyone in the stadium even though they didn’t share her faith in their home. I was wrong that everyone in the stadium might die but where they end up is irrelevant because they were never fleshed out characters. While it’s great Madison had such a selfless death it was in service of mostly nameless characters we didn’t care about. But overall this was a great ending to Madison’s story and she will leave a lasting impression however long the series continues.

“You think you’ve been through a lot? Lady you got no idea.”

It’ll be interesting to see how the dynamics of this group play out going forward, especially with Alicia and Charlie.

“I know I don’t have the story you’re looking for. But someone might be interested in yours one day.”

Two down how many more will fall before the season is finished?