In a flashback Martha (played by Tonya Pinkins) aka the Mystery Woman, comforts her husband after a car accident and is ignored by several driver when trying to get help. When he dies from his wounds and reanimates she puts him down and buries him, the next day she comes across a woman in a truck leaving supplies. Angry that she never received help for her husband Martha decides nobody should be helped and kills her. Martha kills several more truckers in search of the leader and briefly makes contact on the radio with Morgan (played by Lennie James).

In the present everyone survives after Martha guns down their truck though most are injured, Althea (played by Maggie Grace) runs for her truck and Martha holds them at gunpoint while unleashing a walker on June (played by Jenna Elfman). Wendell (played by Daryl Mitchell) takes Martha by surprise and shoots her, but the truck explodes attracting walkers and the injured Martha uses the distraction to drive off. With walkers closing in Morgan leads the group to a hospital so they can hide and access their injuries, Jim (played by Aaron Stanford) nearly leaves in protest but is cajoled by Sarah (played by Mo Collins) into staying with the group. June treats everyone as walkers pile up outside the doors, although Morgan worries he made a bad decision June points out they found lots of medical supplies. Althea uses her reporter skills and learns Wendell became paralyzed as a child saving another child from a car. He applied to the marines as an adult but was rejected and Sarah, already enlisted resigned in protest. 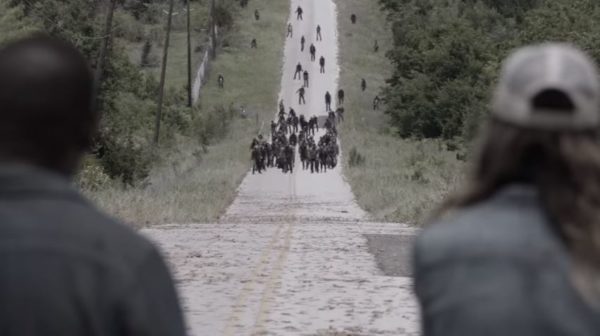 Martha never got any help so she’s decided that nobody deserves it, even though her husband was clearly going to die either way. But if that lady in the truck had come earlier and at least tried Martha may have stayed a grammar obsessed English teacher and not a walker collecting murderer. Wendell got a good shot in but Martha is still stalking the land in Althea’s truck, and you know Althea is pissed she let it slip through her fingers again. Probably more pissed that she has to do impromptu interviews without her camera.  But with the group stranded it’s a great time for character development and in particular we learn a lot about Sarah and Wendell. Up until now they’ve been minor antagonists and comic relief but now they have a backstory and it’s clear they are solidly behind Morgan. With so many main characters dead already Sarah and Wendell would be great additions to the overall narrative of the series.

Alicia (played by Alycia Debnam-Carey) and Charlie (played by Alex Nisenson) come across the aftermath and set out to find them. Alicia tells Charlie that she’s taking her to the beach for the first time, since they ‘only have right now’ and she doesn’t want to waste it. Jim goes to apologize to Morgan just as the walkers break into the hospital and immediately blames Morgan again. Morgan leads them further up until they find a floor not crawling with walkers and barricade themselves. Morgan decides to use the elevators to escape, Sarah and Althea go to get the generator started but Althea insists on going alone so Sarah can be with Wendell and not get trapped with her. The others can’t hold the doors anymore and make a run for it barely getting on the elevator in time. The group head for the roof and June goes to treat what Jim thinks is a cut but reveals it’s a bite from a walker he killed, Morgan feels guilty for not helping Jim kill the walker when he asked. 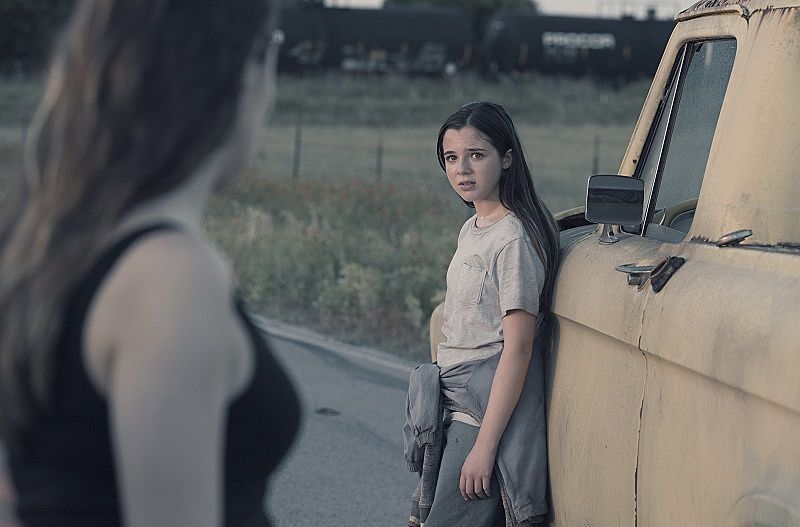 Alicia is all about living for today and when you’re barely guaranteed tomorrow let alone later the same day it’s not a bad idea. A beach day is definitely a better alternative to being chased around a deserted hospital by walkers. Morgan has found himself as the group leader but so far any decision he makes goes south almost right away and he’s quickly learning the burdens of being a leader. But he’s at least got the loyalty of everybody with the exception of Jim but he won’t be around much longer to offer any negative critiques. With all the second guessing and complaining it was clear Jim’s number was up and he’s easily one of the more expendable characters. But he’s not dead yet so maybe he’ll cause some trouble for Morgan in the next episode.

June tells Morgan she believes he’ll get them out despite him doubting himself. Charlie tries to convince Alicia to look for the others but Alicia believes it would be nearly impossible to find them and that they could be dead. They find a flooded road which Charlie deems almost like a beach and they find John’s (played by Garrett Dillahunt) hat. Let’s see if Morgan can take June’s confidence in him and put together a plan. For a second it looked like Charlie might meet the alligator but instead they may have found John. Hopefully they don’t lose him again given Alicia’s reluctance for search party’s.

“We need to keep moving away from the things that want to eat us.”

Morgan might hate the nickname “Mo-Mo” but it’s starting to grow on me.

Walkers may be slow but when they get in a group getting away isn’t as easy as you think.