Althea (played by Maggie Grace) narrowly escapes walkers after escaping the hospital, she finds a news van and returns looking for the others and is confronted by Martha (played by Tonya Pinkins) and a reanimated Jim (played by Aaron Stanford). When she refuses to pass a message to Morgan (played by Lennie James) Martha knocks out Althea, but she’s picked up later by the group in her truck along with a recorded message from Martha.

In the video Martha promises she will be ‘stronger than ever’ and will make Morgan strong too. As everyone prepares to head for Alexandria, John (played by Garrett Dillahunt) confronts Morgan who is leaving to find Martha. Over John’s objections Morgan leaves to help her and meet them at Alexandria with Martha. The others return to the truck stop to load up on supplies for the trip, and make supply drops on the way. June (played by Jenna Elfman) talks to John about her insecurities about their relationship but he assures he loves her regardless of her past. Morgan contacts Martha and goes to meet her, he puts down a reanimated Jim before finding Martha nearly unconscious from her old gunshot wound and takes her for help against her will. Morgan goes to meet the others but he’s unable to reach the others because he’s too far out and they start to worry about him. Althea is approached by walkers but becomes too fatigued to fight them only saved in time by Alicia (played by Alycia Debnam-Carey). 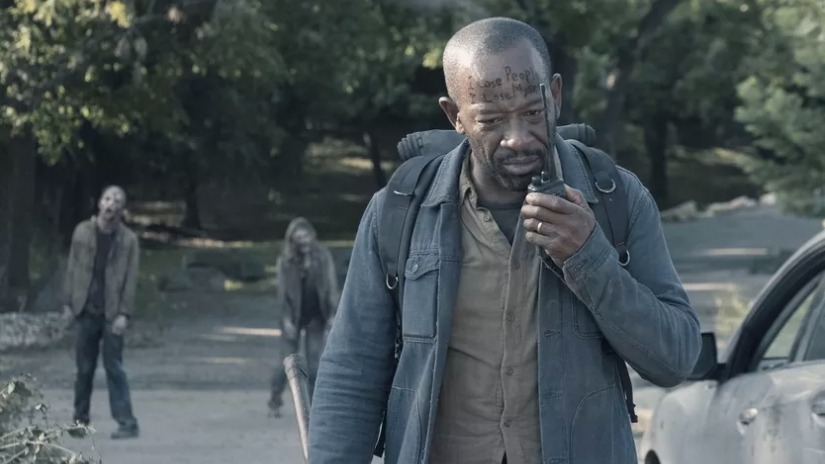 If Martha knew more about Althea she could have had her conduct an interview for her but that might fall under being ‘weak’ in her mind. Morgan and Martha each view the other as a special project, he wants to help her and she wants to kill him. While you can make some comparisons between Martha and how Morgan used to be, he just preferred to be alone whereas she goes out of her way to kill people. In fact she’s more theatrical in her approach like the way she uses walker Jim as bait. Some people are just too far gone and the only question is whether Morgan will realize that before or after Martha gets more chances to hurt him or anyone else. The first thought when Althea collapsed was she got bit but someone would have noticed that earlier. But then you remember Martha made cryptic threats against the group before and it’s clear something more sinister is happening.

Martha tells Morgan the story of how her husband died, June radios to Morgan and tells him that now everyone is sick with whatever Althea has. As Morgan hurries back Martha forces him to crash the car, when he wakes up Martha has his leg pinned and her wound uncovered; she challenges Morgan to either kill her or let her kill him. Martha tells him he wants to save the others for himself because he’s afraid of going back to how he was on his own, which is better in her opinion. As Walkers gather outside, June tries to keep everyone hydrated but realizes the water bottles were all opened and Martha poisoned the water in the truck stop with antifreeze. Morgan can’t let them know what’s wrong and in a moment of rage nearly chokes Martha to death before regaining his composure. He goes on foot to save them but handcuffs Martha to the car so she can’t hurt anyone after she turns, but collapses from his injuries. Althea watches some of her old tapes and goes to the radio to encourage Morgan and threaten Martha, Morgan is finally able to reach them and tell them about the antifreeze. 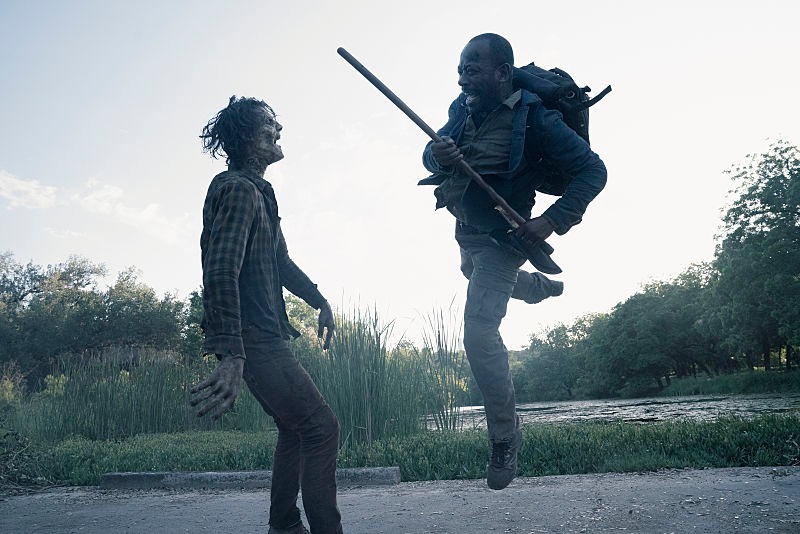 Considering Martha’s usual MO was to kill first and ask questions never, he’s lucky she decided to give him that macabre ultimatum. For a moment we almost had the wild Morgan back, who talked to ghosts and killed without a thought. That part of him will likely always be lingering under the surface but he’s realized that having people to care about can suppress it. Martha’s end was very fitting; tied up so she can’t hurt anyone either as a person or when she becomes a walker. If anything good came from her it’s that Morgan (hopefully) learned that not everyone can be saved and he should focus on those who can be like his friends. It was an ingenious plan Martha came up with and it gave the second half of the episode a ‘ticking clock’ of drama as Morgan races to save everyone. It’s usually customary in a season finale to kill off at least one major character and because for the most part they’re all character we care about it adds to the dramatic tension.

Needing ethanol to cure themselves the weakened group fight their way outside to a truck full of it. Althea uses the machine guns to kill the horde but destroys the truck in the process. John tries to reassure Morgan that he can hold on to himself even if they die before Morgan’s walkie dies, but he refuses to give up. As everyone begins saying their goodbyes Morgan shows up with a truck of beer from Jim’s microbrew and the alcohol in it cures them. Morgan goes back for Martha and she severed her arm and after finding her reanimated puts her down. Morgan shows them a factory and announces he won’t go Alexandria anymore because he’s decided to continue helping people with supply drops using the factory as a base. Alicia suggests they try and turning it into something more to honor her late mother and Althea suggests using her tapes as a way to find people.

It’s amazing how everyone was able to kick ass when they were poisoned and dead on their feet. In the end it didn’t matter but Morgan’s cure was definitely the better option, they got to cure themselves, celebrate an honor Jim all at once. Martha was as determined as she was crazy but Morgan finally made sure she wouldn’t be making people ‘strong’ anymore. The biggest shocker (not really) of the night is Morgan decides to set up shop there and continue helping people. The episode’s end was almost a replica of when they found the baseball stadium with dreams of making it a community. Sure that went up in flames and Morgan’s new home will find inevitable trouble, but for now they can enjoy that time of peace however short it may be.

“It doesn’t take a whole day to recognize sunshine.”

Maybe Morgan will get back to Alexandria in a couple of years or so, that should translate to a couple of seasons give or take.

No major character deaths and the season ended on a somewhat happy note, maybe they’ll get to hold onto that for an episode or two next season.