Trapped by walkers in the ranch pantry, Ofelia (played by Mercedes Mason) tells Alicia (played by Alycia Debnam-Carey) the vents that bring in air are blocked. After learning they have two hours of oxygen remaining they form a plan to clear the blockage and Alicia suggests putting down anyone who was bitten to conserve oxygen.

Crazy Dog (played by Justin Rain) prepares to forcefully weed out the people infected but Alicia addresses the crowd asking anyone who was bitten to come forward and after some hesitation they do. Meanwhile Nick (played by Frank Dillane) tries to rally Troy (played by Daniel Sharman) who is grieving Jake’s (played by Sam Underwood) death to come up with a plan to save everyone. They attempt to distract the walkers to blow up the fuel supply and drive them away. But once they get through their car is surrounded and they’re trapped in a helicopter. Those bitten are offered morphine so they can be euthanized and although most get cold feet one man steps forward, but killing him leaves Alicia emotionally distraught. But she’s convinced by Christine (played by Linda Gehringer) that the others need her to be strong and resigns herself to continue. She talks with Christine who shares stories from her life with Alicia and vice versa and says Alicia should never make decisions out of fear. 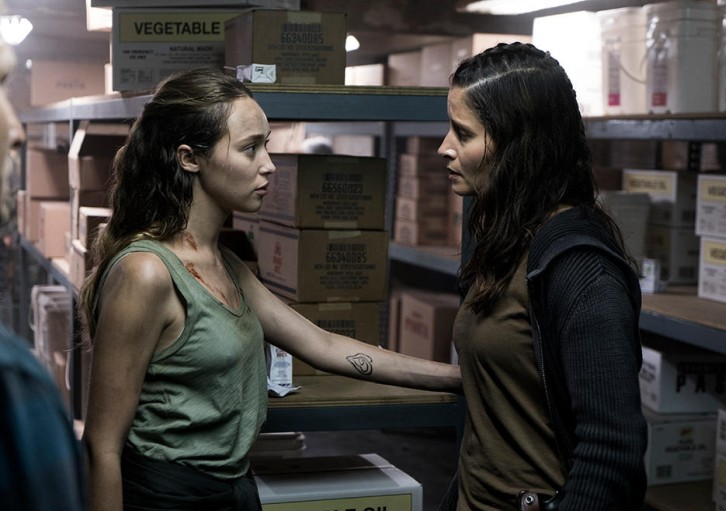 How long can you hold your breath?

Nick and Troy’s rescue fell apart really fast it’s lucky the people in the pantry had a plan of their own. Being locked in a pantry would normally be a best case scenario and initially it looked like everyone would be sitting around eating and/or sniping at each other. But the ticking clock of running out of air kept the drama and tension going constantly which made for a more entertaining episode.

Alicia carried this episode and throughout the episode we got to watch her evolve. She’s killed before in self-defense but killing an innocent person even when it’s the best option was too much for her psyche. Alicia is forced to be strong because no one else can but tries to find any way to stay true to her gentle nature, like when she pushes back against Crazy Dog aggressively executing people. But this could be a turning point where she becomes a more hardened person, a common effect of the apocalypse.

Crazy Dog and Ofelia go into the vents and Ofelia has to talk Crazy Dog down from an attack of claustrophobia. While talking Christine passes out and Alicia begins to feel dizzy; she realizes the air is becoming thin and sees many others have passed out. Alicia stumbles on a newly turned woman eating a man and barely manages to fend her off and kill her, but several others begin to reanimate. In the vents Ofelia and Crazy Dog find a walker is causing the blockage. It breaks free and nearly kills Ofelia but she puts it down and the air begins to flow.

Alicia awakens and begins killing walkers, she locks an unconscious Christine to the armory and gets a rifle and begins shooting the remaining infected. There’s a massive explosion outside and when Alicia is nearly overrun Madison (played by Kim Dickens) saves her having just returned to the ranch. Alicia attempts to revive Christine but is forced to stab her when it’s clear she’s died as well as everyone else in the pantry has died. With the ranch destroyed Madison makes plans for the rest of them to go back to the dam and tells Ofelia that her father Daniel (played by Ruben Blades) is alive. 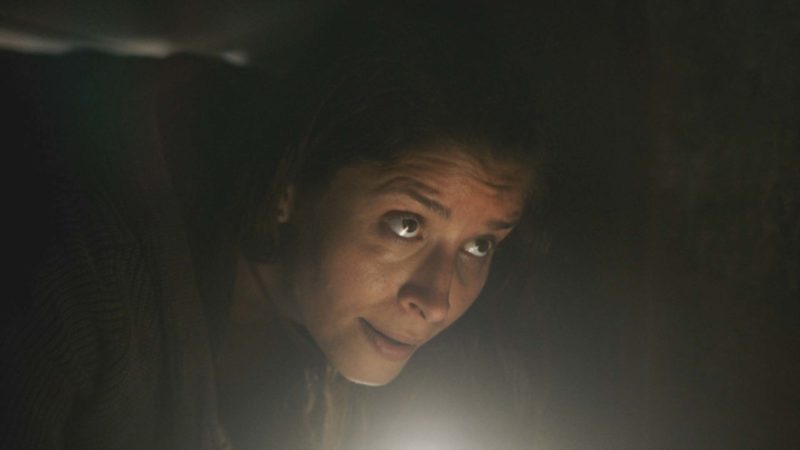 Talk about a tight fit.

It was a given that not everyone was going to survive (especially since most of the community are background characters) but who would have thought the ranch would fall? With all the drama and most of the characters based there I expected we’d be there until at least the end of the season. It was an emotionally charged and action packed episode and the ranch did fall in grand fashion but now the only location left for the remaining characters to go is the dam.

That’s disappointing because the dam has been slowing down the season with a lack of good characters and storylines. But with everyone moving there it could improve (there is the big reunion between Daniel and Ofelia to look forward to for example). Christine only appeared in this episode but the conversations that she had with Alicia clearly had a big effect. Alicia connected with her and lost her within the span of an hour but now Christine’s message of living fully will resonate more because she died.

Alicia learns of Jake’s death and is devastated but when she asks where the horde came from Nick covers for Troy and says he tried to warn them. She rejects Madison’s idea that the dam (or anywhere) can be safe and decides she needs to separate from them and find her own way. Alicia decides to go to an isolated cabin Jake once told her about and sets off on her own but Nick offers to follow and make sure she arrives safe, Madison agrees if he takes Troy as backup.

Nick left the group last season and now Alicia is out the door, Madison just can’t keep her family together. But separation can be good as Nick did a lot of growing when he left so this might ultimately be a huge turning point for Alicia. And it could open the door to new locations and characters which would be ideal since the main location of the season has become the dam which hasn’t offered much story wise.

“Even when you’re hopeless, hope is all you have.”

I can’t believe they left the pantry full of food and medicine. I understand everyone dying was tragic but how do you not take something? I’m sure they’ll regret it when they’re hungry later.

“Stop pretending any place is safe, it’s not. We keep searching for something that doesn’t exist. We kill for it and die for it.”

What do people see in Troy that they feel the need to keep covering for him?