Troy (played by Daniel Sharman) struggles to survive in the desert following his exile. He returns to an abandoned outpost of the ranch and settles in, he finds a group of walkers and fires his gun to get their attention.

At the ranch the Nation and the ranchers are getting along better but there are lingering tensions and the dwindling water supply keeps people on edge. Nick (played by Frank Dillane) expresses remorse to Alicia (played by Alycia Debnam-Carey) over what happened with Troy but she says Troy was a bad person and he doesn’t owe him anything. That night Troy appears in Nick’s house and warns him that soon the ranch will be ‘obliterated’ but runs off before Nick can question him further.

Jake (played by Sam Underwood) tries to convince Alicia to run away with him believing the ranch will eventually die out but she flatly refuses. He then accuses her of not really liking him and seducing him for personal gain. Nick tells Alicia and Jake about Troy’s warning and Jake decides to confront him and Alicia tells Jake her feelings are genuine. While Jake and Nick drive to the outpost they spot a horde of walkers and see Troy setting off explosions to drive them towards the ranch. 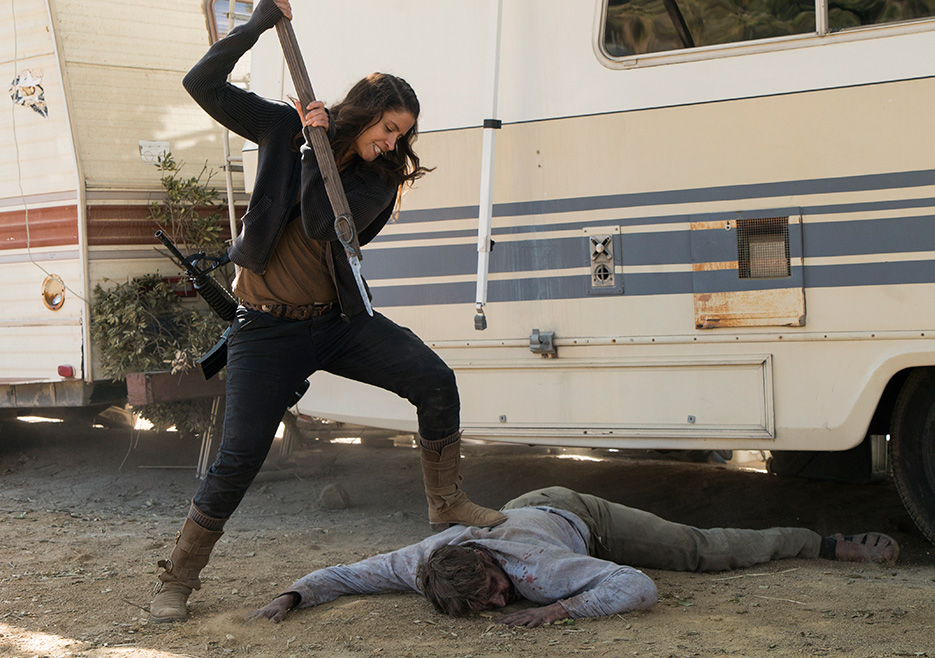 Life on a ranch is never easy.

For all his many negative qualities Troy is very resourceful, imagine what could happen if he used those skills for good. This was a fast paced action packed episode that was much needed after an episode revolving around the uninteresting damn side storyline. When Troy was exiled it was clear he would come back and cause some damage, it happened much sooner it seemed more like a plot for the season finale.

Walker hordes have been used often in both Walking Dead series but they’re always fun because you know it’ll be an episode of intense action. There’s a lot of focus on Troy and Jake’s relationship and Alicia and Jake’s relationship, the general takeaway being Jake is a standup guy. But giving Jake and Troy in particular so much focus coupled with the impending horde it became more and more likely at least one of them wouldn’t make it.

They radio Alicia and she asks Ofelia (played by Mercedes Mason) for help but asks she not tell anyone Troy was in the ranch. Nick tries to reach Troy but when Troy continues setting off explosions Jake attacks him. He nearly kills Troy ignoring Nick’s attempts to talk him down and Jake learns that Nick killed their father Jerimiah (played by Dayton Callie). Jake is indifferent about the revelation and nearly shoots Troy until Nick knocks him down. He falls down the hill and is bitten on the arm by a walker forcing Nick and Troy to cut it off.

At the ranch Crazy Dog (played by Justin Rain) is furious when he learns Troy was at the ranch and rightly suspects he may have led the horde to them. With the walkers closing in Ofelia convinces him to arm the ranchers as well as the Nation while they line RV’s along the fence line in hopes of deterring the walkers. Jake dies from blood loss and a remorseful Troy asks Nick to kill him, but Nick coldly tells him to do it himself. The size of the horde causes RV’s to turn over and everyone is forced to run for cover. 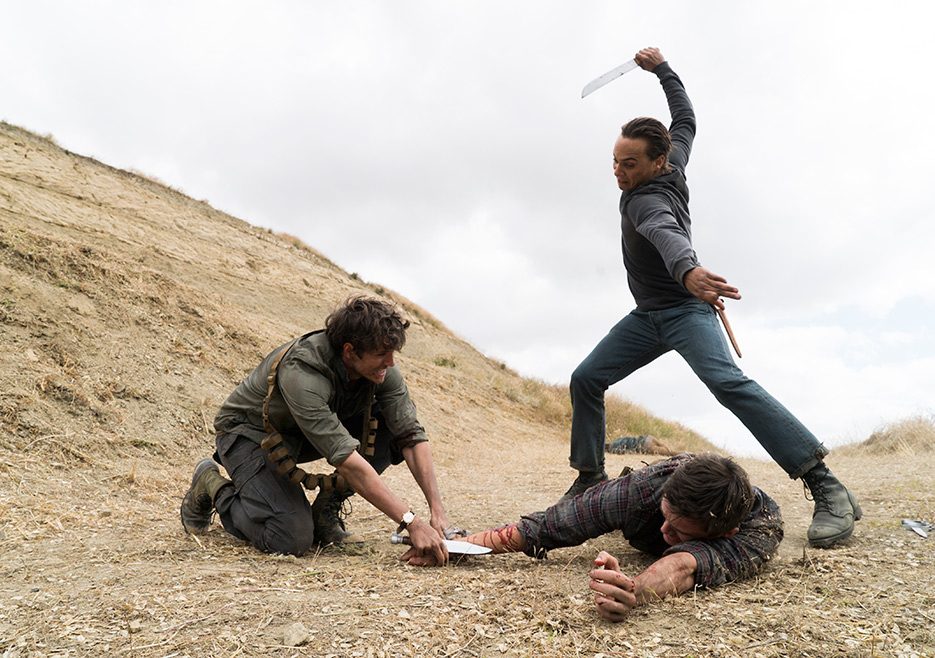 Crazy Dog’s plan is similar to one used on season six of The Walking Dead but good ideas don’t always work. But having to fight together against the walkers seemed to unite everyone because they don’t see skin color; they’ll eat anyone. Jake’s death was a complete surprise because the entire episode appeared to be leading towards Troy being killed. The personal content Jake was getting seemed to be setting up his story going forward while Troy was getting a classic downfall edit, going down in a final violent blaze of glory.

Jake had potential stories going forward whereas the bulk of Troy’s content was related to his brother and father. With them both dead it’s hard to tell where his character will go outside of being crazed psycho but there’s no denying Troy has been an explosive presence. He’s done so many horrible things it’s hard to see a redemption storyline down the road, but love him or hate him Troy is a character that’s fun to watch.

Alicia leads everyone into the food pantry while Ofelia and a few others attempt to slow the walkers. Alicia, Crazy Dog and Ofelia are forced to fight their way into the pantry and barely make it alive. Jake reanimates and Troy puts him down and Nick forces Troy to pull himself together and help him save everyone. Luckily for everyone being locked in with the food they will be able to survive for a while until they figure out something. Unfortunately their best chance at rescue includes Troy who is not only crazy but is now completely despondent. But if there’s any bright side fighting the walkers together might help bring the two factions closer together; assuming there is still a ranch left.

“We need to figure out how to save the people you tried to kill. You can sleep when your dead.”

A truly horrifying thought; the ranch becomes defunct and we’re forced to play out the season at the dam.

“Look at everything he’s done, he’s not coming back from this.”

Among Troy’s many heinous acts he tortured baby rabbits as a kid, there’s just no redeeming qualities in this guy.