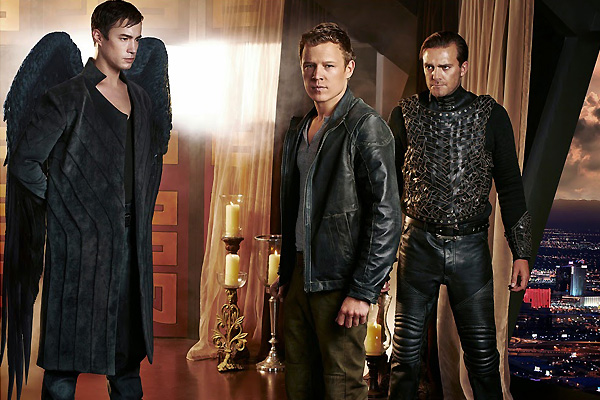 Define spoil. Yeah, yeah there might be a lot of those…

Syfy’s new show, Dominion, is a television continuation of the 2010 film, Legion. I cannot stress this enough: if you haven’t seen it, go watch it (I’m sure it’s available, er, “online” somewhere. I’d throw up a list of sites, but I’m not that ballsy). It isn’t necessary to watch the movie in order to enjoy the show, but in my opinion, Legion was everything in 2010, probably the best film released that year. However, if you haven’t seen it, this article will completely, totally, 1000% ruin it for you. Of course, if you’ve seen the pilot of Dominion, you already know what the film is about, so what do you want from me?!

I’m all about bridging gaps (settle down) and clearing up blurred lines, so if the Dominion pilot episode left you with the Scooby-Doo face, here’s an article to sweep up the confusion.

If Dominion didn’t make it painstakingly obvious to you that Alex (Christopher Egan) was the Chosen One, you shouldn’t be allowed to reproduce. In most cases, the guy that the camera stalks, who seems like a nobody, is actually a big deal. The Chosen One is supposed to be the savior of the human race. 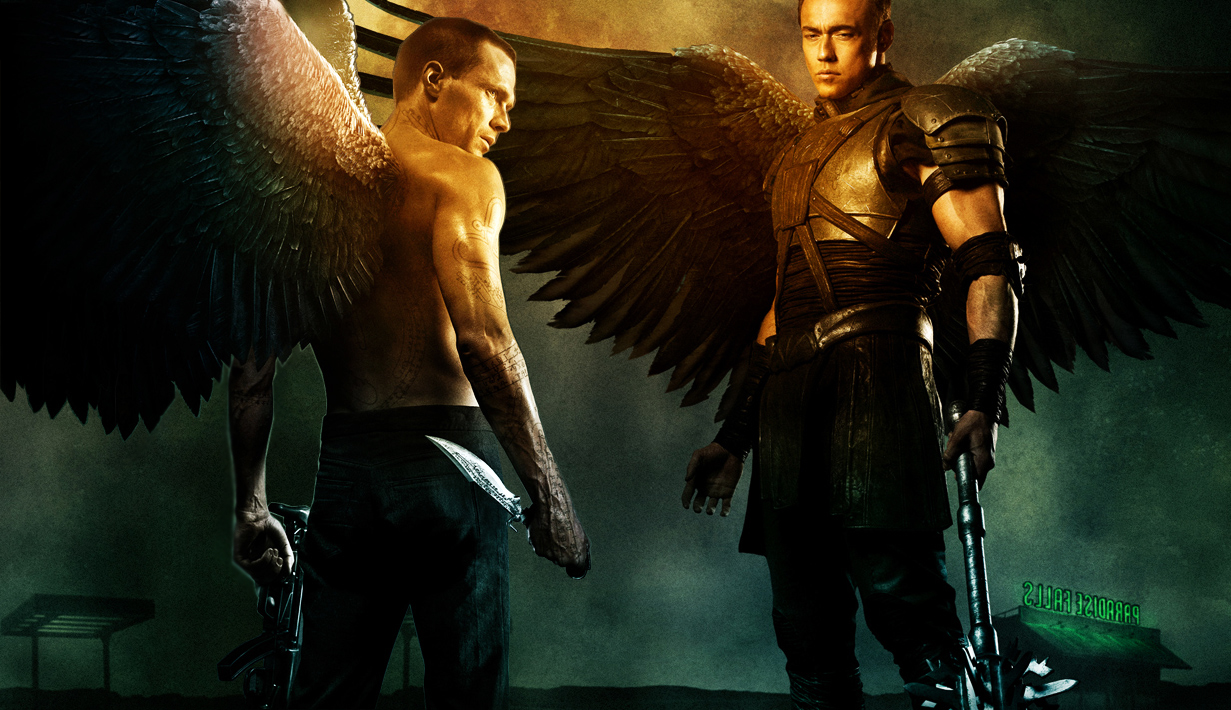 In Legion, God sent out an order to have the Chosen One—baby version—killed. Michael (Paul Bettany) disobeyed this order, believing it was a test from God. He cut off his wings and turned against Gabriel (Kevin Durand) and his fellow angels to save the savior. Charlie (Adrianne Palicki) was an unmarried, pregnant young woman, and Jeep (Lucas Black) was the young man in love with her. Although Jeep was not the baby’s father or even someone Charlie loved back, he risked his life to protect them. The baby was born, and Michael succeeded in defeating Gabriel, earning back God’s favor and his wings. Gabriel retreated, but it was clear that he still held onto some serious hatred for mankind and was jealous of Michael.

Dominion picks up twenty-five years after this. Civilization is on the brink of extinction, and humans reside behind the protection of fortified walls in order to survive. The threat of the angels has simmered, but the humans want a more permanent victory. They’re basically sitting ducks, and although they have the Archangel Corps to serve as their first line of dense, I didn’t see those losers doing much when warrior angels invaded. And what about that setup? The angels just flew right over that pretty wall and attacked the city. 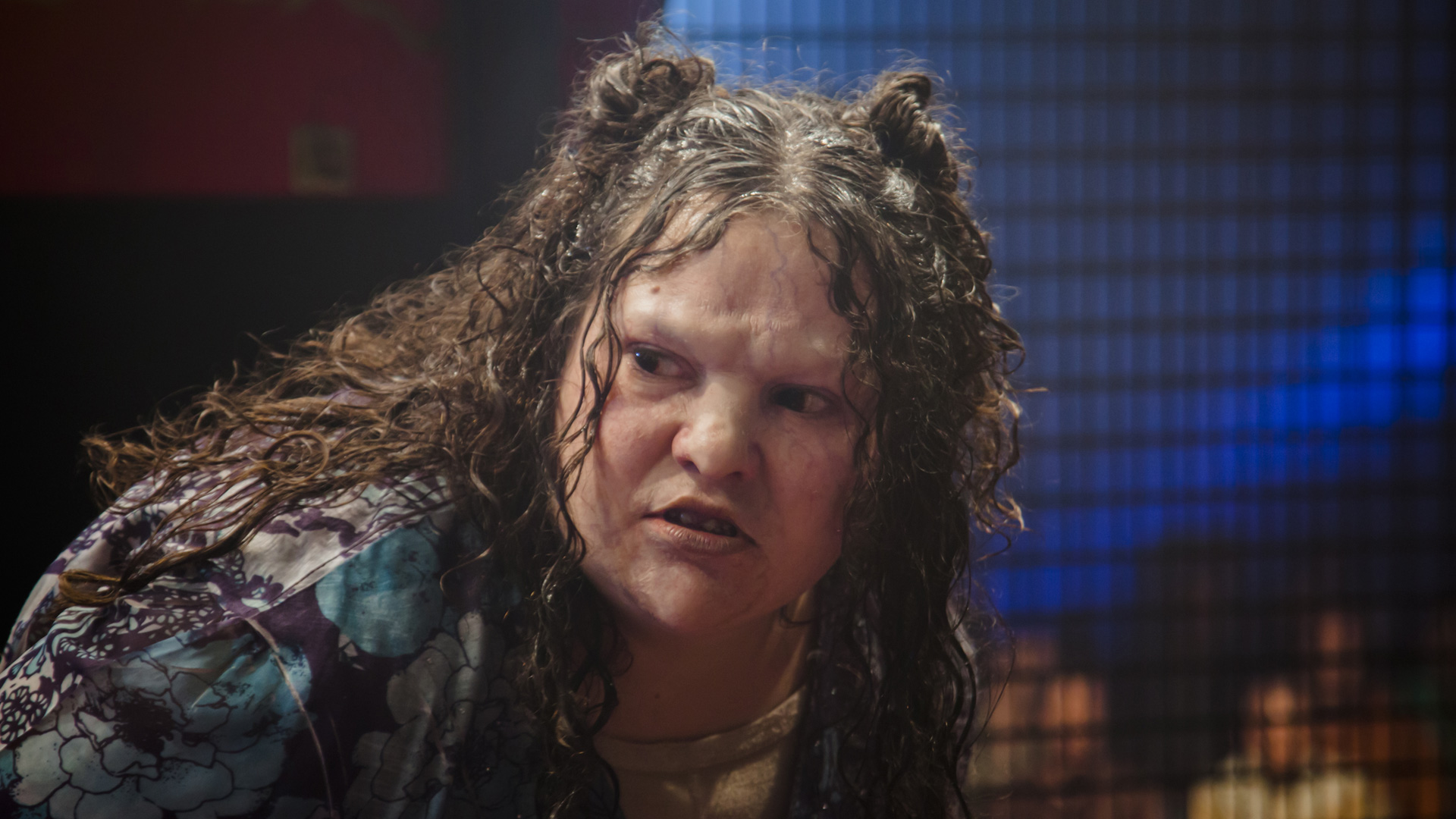 The Dogs of Heaven, or the Eight Balls, as they call the lower level angels, are exactly the same in both: black eyes, gross teeth, black veined flesh like something out of a zombie movie. They can crawl on the ceiling, have Superhuman strength, and are consistently pretty freaking creepy. But, as expected, there have been some changes.

The good thing about this series is that most alterations fit well into the premise. Dominion brings a whole new cast with a whole new setting to extend the plot, but there’s still a few characters who are present in both.

Alex and Jeep (Langley Kirkwood) might be the only characters that can seamlessly transition into Dominion as different actors with little hiccup. Charlie’s baby, Alex, has grown into a young adult, and over two decades of living harshly could’ve done a lot to alter Jeep’s appearance. I just have a difficult time wrapping my noggin around Alex growing up as an orphan. Just—why? Where’s Charlie? I’m guessing she’s dead, but what went into that decision? Also, I just don’t get why Jeep couldn’t stay his behind in Vega to raise Alex. Dude, you had one job, ONE job. It just seems lackluster. Then, he goes and gets himself killed. Well, overall, you suck. I get that the creators might’ve wanted Alex to have a hardened exterior and forced independence from his abandonment issues, but there’s more than one way to make a bad boy.

Viewers are also introduced to newer versions of Michael (Tom Wisdom) and Gabriel (Carl Beukes). I was kind of on the fence with Wisdom’s Michael because, well, Paul Bettany with muscles beats everything. However, there are many depictions of angels, and we can’t always expect abs and fantasies. It’s probably more suitable that Michael’s lithe and lean. I just don’t know how they’re planning to pull the brunette wool over our eyes. Isn’t the point to make the characters look similar?

In Legion, Michael and Gabriel are shown in Heaven as Paul Bettany and Kevin Durand. It was said that lower angels were beings that lacked true forms on Earth, but archangels didn’t need to commandeer the bodies of humans because they had their own. I suppose the angels could always put on another human shell like changing shirts, so is that the excuse? They just wanted a new look? If I could pull that one off…

Ultimately, we won’t know what Dominion has in store until we get through the ten eps of this season. I’m excited and surprised by Syfy’s new look, and can’t wait to see more!