I avoided this movie like the plague when it hit theaters early last year. I had a learned a very valuable lesson after the Total Recall remake, being you can’t distill an ultra-violent movie into something palatable for younger ages (although, there’s a long history of marketing R-rated action movies to kids, but that’s another story). I made a very conscious effort not to see this on the big screen.

Looking for something to watch on Netflix, however, I stumbled upon it and decided to give it a watch. First impressions, it’s not too terrible at all. In fact, this remake has enough going for it that, dare I say, justifies its own existence even if it doesn’t come anywhere close to what the original had accomplished.

The bare bones of the plot is essentially the same. Alex Murphy (Joel Kinneman) is a Detroit cop and family man who’s killed in the line of duty and reborn as RoboCop by a large corporation with ulterior motives. As he begins cleaning up the streets of Detroit, and investigating his own murder against his own programming, outside forces converge to destroy this future symbol of law enforcement once and for all.

Several differences from the original film highlight the proceedings almost immediately. Instead of a local news broadcast, we get a Bill O’Reilly-esque pundit television show called “The Novak Element”, wherein the host (Samuel L. Jackson) discusses the need for robot police forces on American streets.

Also, while a satirical edge threatens to emerge at certain points in the movie, most of it coming from the Samuel L. Jackson scenes, that portion has been stripped down in favor of focusing on the plight of maimed soldiers who are put back together and the difficulties they face. It’s an interesting way to go about retelling the same basic story, and really the only fitting one.

The film tries to juggle a lot of things, too, possibly more than the original film did by not connecting the plot threads together so neatly or focusing on others. For instance, we get a lot more focus on Murphy’s wife (Abbie Cornish) and son, and they figure very importantly into the film’s finale, albeit with so much screenwriter manipulation you can see the strings.

There’s also more to do with RoboCop’s creators, or creator, specifically, played by Gary Oldman. A lot of the movie showcases him watching, and eventually marveling, at all RoboCop can do. Arguably, this movie is more about him, or Dr. Frankenstein, than it is about his creation. 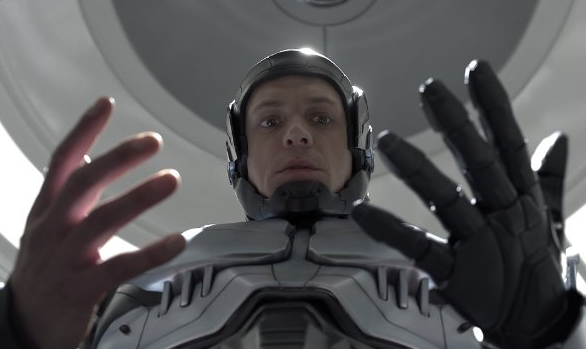 The one thing I wish was handled a little better was the whole “Murphy” emerging to consciousness portion of the movie. Based on what’s in this movie, there isn’t a lot of buildup to moments where he does the impossible and “rewires” himself to act not in the interests of the company. It all just seems to happen without any sort of gradual rise. We’re missing that great moment from the original where RoboCop tries to arrest an OCP Executive, only to have a system shutdown and he almost gets blown to hell in the process. This basic event happens in the movie, sure, but it feels streamlined so much as to be toothless and, conversely, Murphy’s humanity is handled with much less obtuseness throughout the movie so we don’t get great moments like in the original when RoboCop smiles after telling the CEO his true name.

I hate to be the guy who spends a lot of time reviewing one movie only to be looking back and comparing it with another the whole time, but I basically just did. It wasn’t to be nitpicky, mind you, because I feel this remake of RoboCop is fairly successful in updating the story to our current socio-political climate. It nimbly avoids the problems of the previous high-profile remake of a Pula Verhoeven film, Total Recall, by making changes where it makes sense to do so. I recommend giving this a watch.

If you enjoyed N. Demmy’s look back, you can find his latest work right HERE and his earlier articles and reviews over HERE.