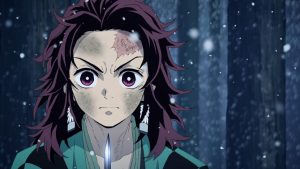 Demon Slayer Is Perfect For Its Genre

It’s an excellent sign of an anime’s quality that not only did I end up watching four episodes instead of three to review Demon Slayer, but actively want to see the rest of it. Say what you will of Shonen anime, there’s a reason it’s still so popular and why Attack on Titan and My Hero Academia both have such a rabid fanbase. Though the basic premise of a plucky young hero doggedly going for one goal and overcoming increasingly intense and dramatic fights by willpower and determination is played out, if it works, it works.

And Demon Slayer is not messing around either with its plot. Much like My Hero Academia, this show doesn’t break the mold, it doesn’t do new things with the concept; it streamlines and perfects it. The pacing on this show is extremely tight and it does not drag its feet along with the plot. 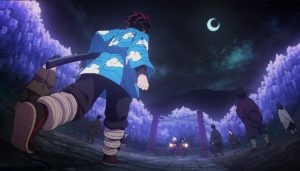 The Demon Slayer Plot Moves Like A Sword Draw

It has the same plot origination as Attack on Titan. Evil monsters kill family, swears to kill them, learns to be a magical fighter. The hero’s journey is so stamped on this—and, yet, I adore it.

Usually, as I’m sure regular readers have noticed, I’m not one to enjoy clichés, but this show just does them so well. Watching someone fight demons in bombastic, well-choreographed battles, with actual strategy is just entertaining. A show can be all fighting, all combat, if the story is being conveyed through that fighting. 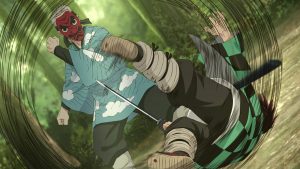 Demon Slayer knows this and uses its premise to show, not tell. By the first ten minutes you already understand how the character is, what sort of man he is, and even sets up some minor plot bits that might come up later (he’s paid for something and never spends all of it).

But, all that said, there is one thing unique I can touch on before I go: the animation. This show does a strange dance of CGI animation and normal anime animation and uses hyper-stylized effects for action moments. It looks goofy when people are simply walking around, as they’re like old video game characters, but during the battle moments there’s such a fluidity to motion, yet a sense of real impact, that it’s mesmerizing to see. 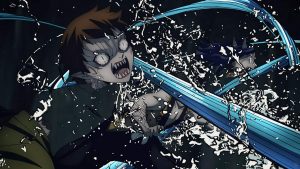 The art style of this show helps, too. There’s a distinct aesthetic to how everything looks, from outfits to monsters, that makes it feel cohesive to the world and feels real for the time period—even if it’s likely not. Funny enough, the only thing that breaks the illusion isn’t visual, it’s the dialogue. Characters say modern-day slang terms, especially the demons, that just feel weird. It does make the demons even more separated from the often stoic but compassionate human characters—but it is worth noting as perhaps the only major blemish on a truly good show.

If you liked Naruto, Bleach, One Piece, anything like that as a child, then this might be your jam. It recreates that nostalgia, even in a cynical anime fan like me.

Demon Slayer is a show, that, if you can stomach some honestly intense gore, I can’t recommend highly enough from the first few episodes. 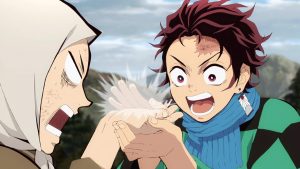