BAM! Yeah, that’s what Aquaman looks like now. A little different and much more edgy and exciting than this, huh? Snyder posted the pic of Jason Momoa and his trident for the world to see, but we still don’t really know how much we’ll be seeing of the deep sea crusader in 2016. Momoa’s screen time in Batman V Superman: Dawn of Justice, due out March 25th of next year, isn’t clear, but he will be appearing in 2017’s Justice League and in a stand-alone film due out in 2018.

The other bit of news comes in fragile whispers. See, Snyder’s post also reveals an interesting piece of information: Unite the Seven. That’s the Justice League, so does that mean all seven will appear in Batman V Superman? If so, then who is playing the Green Lantern? Ryan Reynolds will not be reprising his 2011 role as Hal Jordan and since the movie received heaps of negative reviews the question is, does Hal come back?

The original rumor was that Fast 7 actress Michelle Rodriguez would play the character. However, that got squashed in a mess of controversy. Now fans want to see the character John Stewart and favorites to play the role have emerged. Idris Elba is popular but unlikely due to his contract, even if too small, with Marvel. Terese Gibson has spearheaded a campaign to cast himself as the hero. 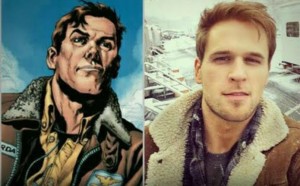 But Hal could still come back. Chris Pine was thisclose to becoming Jordan in 2011, but went on to become a mega success anyway. Maybe DC wants to give him another shot. Another strange rumor is that an actor by the name of Dan Amboyer has already snagged the super secret spot and is filming in Detroit already. The actor has appeared in Person of Interest and Inside Amy Schumer and, as per his own resumé, has been cast as a pilot in B V S. Somewhere out there, a person took a picture of Amboyer and placed it side by side with a photo of Jordan and the resemblance is incredible, but probably coincidental. Amboyer is a Detroit native, and although Snyder likes no-names, it’s more likely that DC wants to pack a punch to keep up with The Avengers. Only time will tell.

If you enjoyed Carly’s justice, you can find the rest of her work right HERE on Sci-Fi Bloggers. You can also follow her on Twitter @MrsCarlyRodgers.