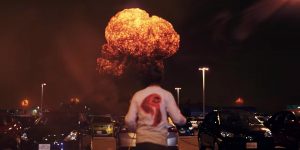 The worst part about Daybreak is that I liked it. The awful truth is that, as I went along, I got into the show and liked the characters and the world and was having fun with it. Heck, I fell into a giggle fit at one point from a dark joke.

And you may ask yourself why oh why would that be a bad thing? Surely, enjoying a show, in our stressful modern world, is a good thing? Well, it’s because Daybreak is, ultimately, a show that’s meant to pander to my demographic in every way that it can.

This is obvious within seconds of the show. There are massive amounts of pop culture references and constant fourth wall breaks. Like, every few moments of runtime contains something, to the point it makes the fiction’s reality feel breakable and breezy. 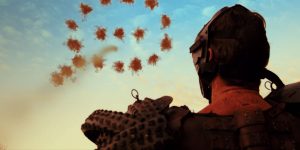 Daybreak Is Infested With Slang And References

And then there’s the dialogue. It’s densely modern teenager. Like, I know slang well, but even I had to reach for online references. For older crowds, it’s going to be so thick that it may as well be gibberish. We’re talking a constant deluge of odd wordplay/rhyming word association, social media terminology, and severe mangling of verb tense.

And that’s not me being an old person here, or disparaging modern trends, it’s just pandering. This show will date itself in very little time.

Hence, we go back to that first sentence: is it bad that I enjoyed Daybreak, and kind of liked the loose way the whole show handles its plot?

There Is No Real Harm Exactly In Liking Daybreak

Well, I guess not. I can have guilty pleasures the same as anyone. It’s been a long time since I’ve seen something this irreverent and silly for adults. After reviewing stuff like Joker and Carnival Row, it’s nice to have something sugary. The show just flatly does not treat itself seriously most of the time, and that makes it a lot harder to dislike it.

But, all that said, for the average viewer, that defense will only work for so long. Because, on top of being hyperactive, wow is Daybreak cliché. The jocks are the basic enemy the whole way—though the golfer clan being the unfortunate misfits of the jock world is funny—and cliques are post-apocalyptic cultures. 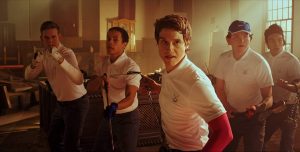 Daybreak Has Some Rather Unoriginal Ideas In It

It’s like something you’d see out of American Dad—but, not, you know, a twenty-minute show with zero stakes.

But then, just occasionally, the show gets some real storytelling going—the characters do stuff that’s interesting enough, and emotionally resonant enough, that you can care about them. Our main character’s romance is cute and genuinely sweet, and you really do want to root for him because of that. Also, conversely, the best scene in the first three episodes centers on the main villain, whose hang-ups are both deranged, funny, and deeply tragic. 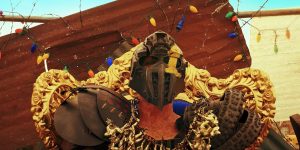 Really, if it weren’t obvious by my waffling here, at the end of my three-episode watch I didn’t quite know what to make of Daybreak. The editing and the fourth wall breaks are slickly done, and it’s never boring or dragging—but it’s also gross, juvenile, and can be too proud of itself for how clever it thinks it is. Deadpool works as a movie because it’s contained and short enough to not overstay it’s welcome with the same shtick, but Daybreak has an entire season of this, and I don’t know how well a series can maintain such an atmosphere without becoming annoying or the tension of the series and its story being utterly deflated by just the wrong joke.

Sometimes you just need to unwind, but if you don’t want stupid cringy fun, or aren’t willing to deal with a severe saturation of Millennial/Generation Z culture and humor, then skip Daybreak. 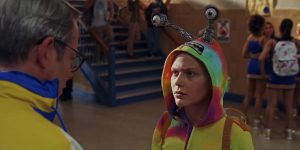