Not long ago, the moment many fans have been waiting for arrived. Daredevil, the first of five shows being developed for Netflix by Marvel, launched its entire first season. Thirteen episodes became available to Netflix users on April 10, and from the looks of things, plenty of people have already binged on the entire thing. 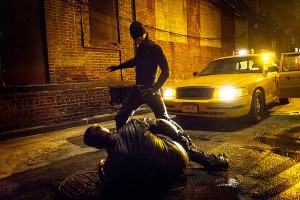 Over on IMDb.com the show holds a staggering 9.3 rating based on feedback from almost 28,000 reviewers. On Rotten Tomatoes, the series rocks a strong 97% approval ratings from both fans and critics. Considering the high expectations audiences had for the Marvel hero, the initial success is somewhat shocking. The film version of Daredevil tanked something fierce, and viewers put a lot of pressure on showrunners Drew Goddard and Steven S. DeKnight. It seems as though expectations have been met, if not exceeded. Next up will be Marvel’s A.K.A. Jessica Jones starring Krysten Ritter, followed by Luke Cage and Iron Fist before leading into The Defenders.

The episodes lead the Marvel Universe into a much darker place. New York City’s Hell’s Kitchen neighborhood provides a gritty backdrop for Matt Murdock to unleash Daredevil. It starts out so well that you will be absolutely hooked after episode two. The groundwork is laid out simply, yet intelligently. It’s an enticing tale of background and lore, but its source material is well-represented and intensely intriguing. Charlie Cox plays Murdock so well, and his counterpart, Vincent D’Onofrio, is truly inspired as Wilson Fisk. 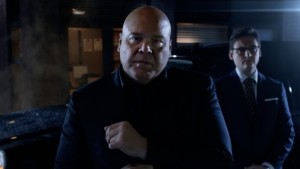 Overall, I commend those behind Marvel’s Daredevil. It’s a character that no one was actively trying to reboot, but they found success and ultimately created a new hero to love for those not so familiar with characters from comics. The episodes start off so strongly that I feel as if they can’t really turn viewers away, but it also feel as if some don’t finish at their full potential. The cinematography is incredible and the fight scenes are something you will go back and look at again and again. I’m talking about that hallway scene. I recommend you watch it even if you’re not a fan of comic book films, because the writing, acting and camera work tell a great dramatic story that I think anyone can enjoy.

Have you checked out Marvel’s Daredevil?

If you enjoyed the Carly’s daring antics, you can find the rest of her work right HERE on Sci-Fi Bloggers. You can also follow her on Twitter @MrsCarlyRodgers.