On this week’s episode of Marvel’s Daredevil our hero is in peril and, as if we doubted it before, The Punisher means business. He’s wiping out the gangs of Hell’s Kitchen with firepower of an entire SWAT team and now he’s got beef with Matt Murdock.

While Murdock struggles with his recovery, it’s Foggy who steals the limelight. He and Karen are still fiercely protective of Irish Mob survivor Grotto and insist on meeting his conditions with the DA and placing him into Witness Protection. Foggy is spewing legal jargon and showing up the uptight DA Reyes and providing viewers with more reasons to love him. 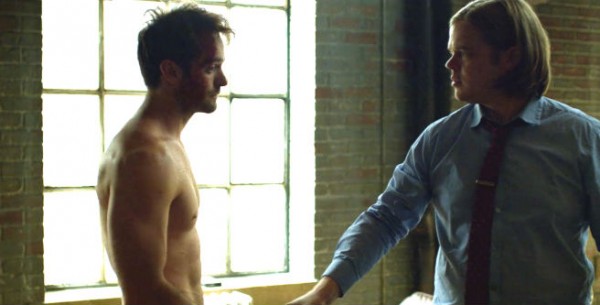 On the other hand it’s getting harder to love Murdock. He’s driven to the point of recklessness on his mission to clean Hell’s Kitchen. He’s pushing away the people he cares about in order to continue doing the thing he loves which is kicking bad guy butts in the dark of night. Karen comes to him in fear of The Punisher and reiterates Sergeant Mahoney’s thoughts that Daredevil has inspired this new vigilante who has decided he can also take the law into his own hands. Instead of spitting out his secret identity, Murdock just tells her she’s wrong. Oh, great. We all feel so much better. She leaves feeling no better than before. There’s also a weird sexual tension here that I truly hope doesn’t escalate to anything more since I like the Foggy, Murdock and Karen’s chemistry as the three amigos and the less love triangles there are in the superhero world, the better.

The episode comes to a climax when Grotto is set up by the DA as bait for The Punisher unbeknownst to Foggy and Karen. The Punisher obviously sees through the trap and busts in ready to take down the DA’s entire squadron, but a battered Murdock shows up and the two have quite the battle. It doesn’t end well for the blind hero as the audience is left to believe that he is now in the hands of the mysterious Punisher.

Overall, the episode had good and not great moments. As for the good, Deborah Ann Woll as Karen Page and Elden Henson as Foggy really shine as a team this episode. They appear to be the good guys while Murdock is slowly teasing the line and confusing audiences of just what is right and wrong. Jon Bernthal is great as The Punisher, but he’s still a mystery, which I hope gets more backstory soon because there are only thirteen episodes and his story is one that needs to be told over time.