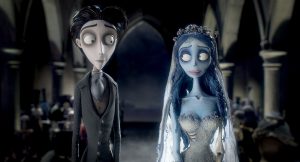 Corpse Bride Is Too Good To Leave Dead

As a fan of The Nightmare Before Christmas, you’d think I would have gotten to Corpse Bride sooner, but here we are.

And, yes, I do have to compare the two of them, because they are extremely similar. From style to plot to progression to even the type of comedy, I would not be surprised at all if Corpse Bride was directly inspired by a want to more thoroughly hash out the love story of Sally and Jack.

But, regardless of the inspiration, the result is what’s important, and the name of the movie’s game is romance, dead and center (pun absolutely intended).

And what a romance it is! 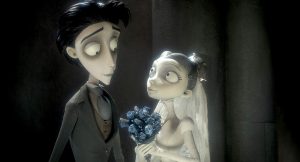 No sarcasm intended, for a movie that is very short, it’s got a surprisingly nuanced romance. While I’ve been burned so many times by pandering and honestly kind of grossly objectifying love triangles with the guy in the center, Corpse Bride shows so much subtle characterization. The Corpse Bride herself, once you know her backstory, comes across as a naïve girl who just wanted to be married and is trapped in that impulse by death. While her rival is simply a sweet, sensitive girl who happens to be a wonderful fit for Victor.

Now, I’m never a big fan of the “instant marriage” plotline or any time characters fall in love at first sight—it sort of eliminates a lot of interesting character dynamics from a plot—but, I kept reminding myself that this was, and will continue to be (like Nightmare) a fairy tale for a modern, darker age. Or, rather, fairy tales with reclaimed darkness. 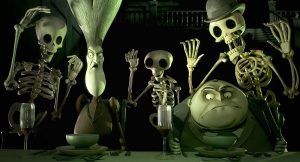 The plot is simple and quick is what I mean. Really, it’s just an arranged wedding that seemed bad, then turned out to be a fine idea, then is interrupted. Then happens anyway.

If it wasn’t for character depth, that would be annoying. But even our most bland character, Victor, has a lot of charm and energy in certain scenes. He’s not manic though, remaining dignified and “proper.” Most importantly, he’s also relatively respectful to the women involved, despite the situation. 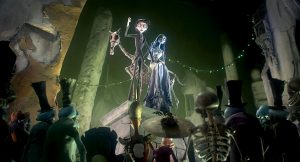 But enough about the plot. This is a film where there’s no way to fully watch without marveling at the animation technique. From multiple moments of the titular Corpse Bride looking ethereal, menacing, dark, and even beautiful, to skeletons that rattle and look jagged, to anytime anyone pours liquid, this is made by a company that knows what it’s doing, and I hope the style remains something people continue to work with and improve.

In summation, Corpse Bride is a romantic and musical piece of lovely dark art, and, though first seeming simple, like the animation style itself, it has so many tiny details that it becomes something wonderful and marvelous. If you’ve somehow missed this one, and like anything by Tim Burton, you owe it to yourself to complete the catalog. 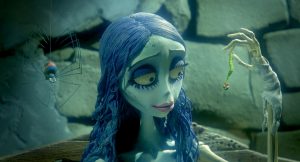