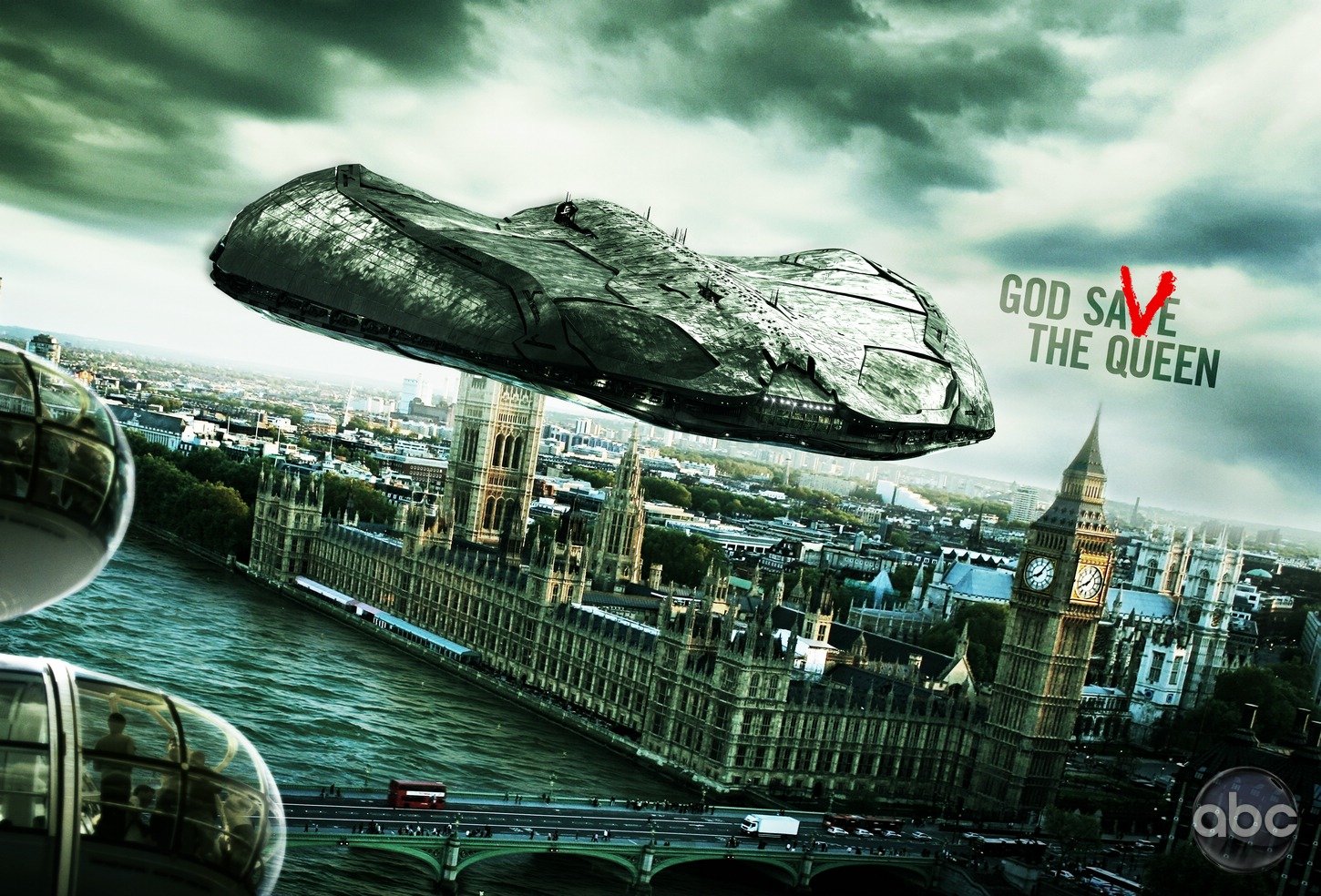 As a self-proclaimed and certified Newbie, it is my goal to throw myself headfirst into all things sci-fi, specifically peering into some of the most critically acclaimed science fiction based TV shows, movies, and literature! I check them out in pure tabula rasa fashion, with typically nada knowledge about the premise and letting the work speak for itself. Afterwards, I will give you the most honest of honest opinions and retreat to my phantom castle on the other side of the internet.

In this week’s Confessions, space has come to us! V is a television show that premiered in 2009, a revamp of an 80s science fiction miniseries. For years, I’ve heard things about the show, what it could’ve been and what it wasn’t, but I wanted to check it out for myself. 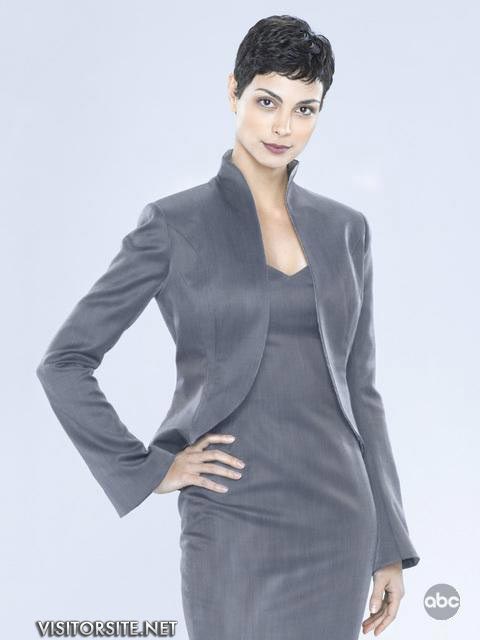 If giant motherships settled in the air space of every major city, what would your reaction be? Like the people in V, I know for sure I would definitely lose my marbles. Similar to Independence Day (1996), V is a show where aliens come and find us. The difference is that, in Independence Day, the aliens open their ship with guns blazing and attack mankind directly. In V, the aliens disguise themselves as friends, or “visitors.” I don’t know about you, but if someone was going to destroy me, I would rather they shot me in the face than stabbed me in the back.

The base is foolproof, but there was something missing here, one detail that didn’t lock me in as a viewer. It’s difficult for me to place exactly what it was, but I just know that I wanted more. V was somehow lacking. The story was there, the cast as well, but something wasn’t clicking.

At the start, we are introduced to several main characters and get the beginnings of the major conflict of the show. It was nice to see so many familiar faces: Morris Chestnut, Laura Vandervoort, Elizabeth Mitchell and two Firefly alums, the amazingly beautiful Morena Baccarin and my love, Alan Tudyk (even if he disappeared fairly quickly).

In my opinion, there lacked a true connection between most of the characters and I. Usually, there’s someone to root for, right? Someone who, no matter their place on the spectrum of good and evil, you want to see succeed. The only characters I was remotely interested in were Ryan Nichols, played by Morris Chestnut, and Kyle Hobbes (Charles Mesure). These two seemed to be the only complex characters on the show. In Ryan’s case, he was leading a double life and struggling with his past, present, and future. Hobbes was a terrorist turned masked crusader, the unlikely hero, whose morals were questionable and motives always self-interested. They both had layers (literally, in one case) and secrets. I rooted for Ryan (he made A LOT of dumb mistakes)! This is a spoiler, but I have to say this. I’m happy his fiance (Lourdes Benedicto) died, but I wish they had actually showed the baby. It has a tail, but it’s half human. You mean to tell me it didn’t get any human features? Or is it supposed to be human in its ability to feel emotion, is that the angle? Anyway, getting off track here… 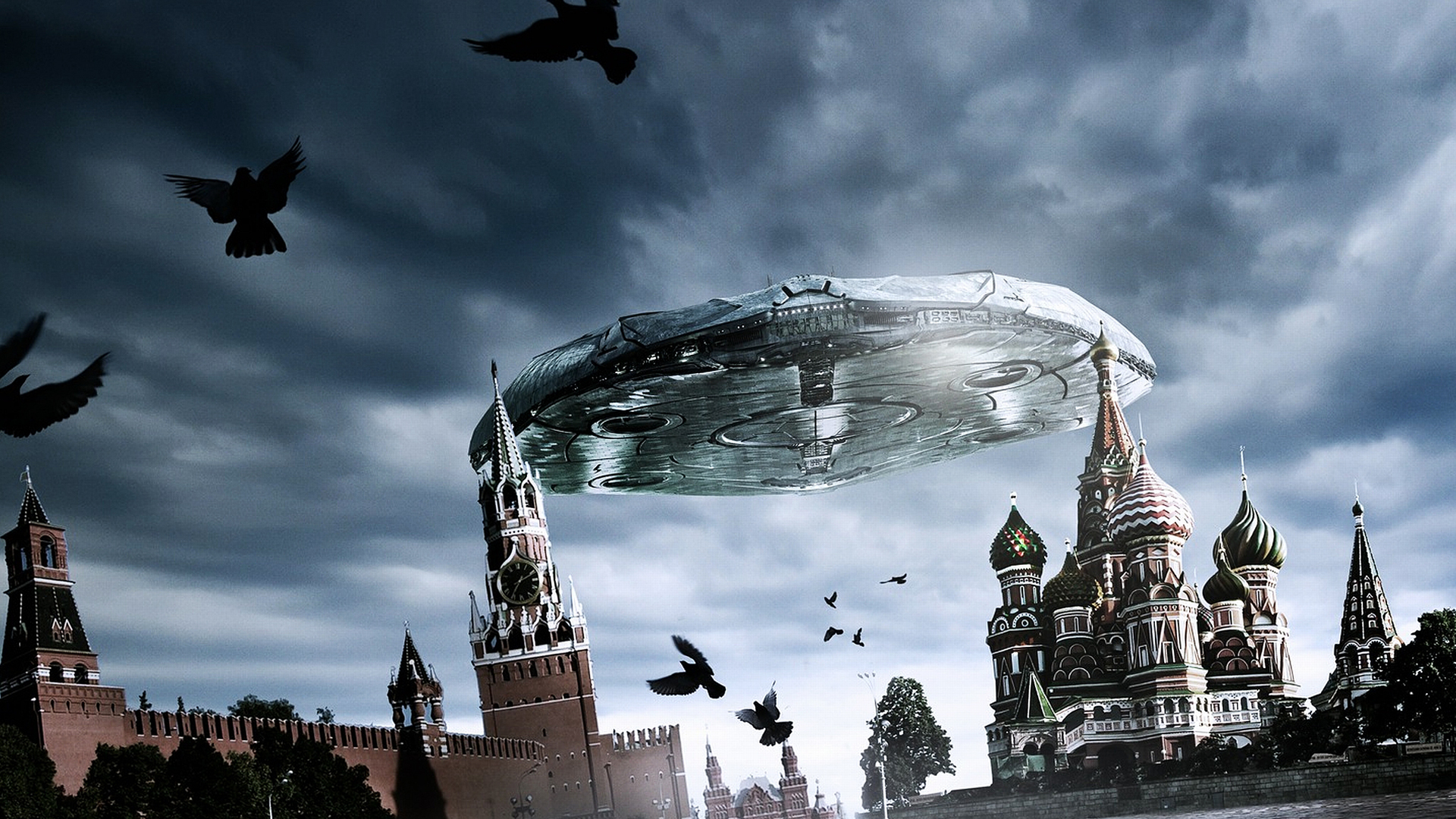 Every other character was either too predictable or just plain ole uninteresting. Take Erica Evans (Elizabeth Mitchell). Why in the hell did they make this woman the protagonist? After watching 12 episodes, I just never took a liking to her. She’s a single mom to a rebellious teenage son, Tyler (Logan Huffman), but she’s also an FBI agent that specializes in uncovering terrorist cells in the United States. Before I even finished the pilot, I could pretty much map out most of her decisions. She’s has this tough, independent, I-Will-Eat-You-After-I-Dominate-You exterior because she’s a cop and a single mom. That tells you what about her personality? Strong sense of right and wrong, strong sense of equality, strong sense of patriotism, tendency to throw herself spontaneously into dangerous situations, willingness to protect. Essentially, that’s all an act, all work. She has another side to her, a softer side. This, I know because she has a rebellious son (let me guess: daddy issues?). She tries to compensate for the lack of a stable father figure in her son’s life, which is why if her son robbed a bank and skated figure eights around her with bags of money, she’d still wholeheartedly believe he was innocent.

Do you get what I mean? That’s why it was kind of hard to watch, because every time a character was introduced, I mentally did the exact same thing, and it killed the story for me. Maybe I need to take a break from TV, but it’s the creators’ fault. 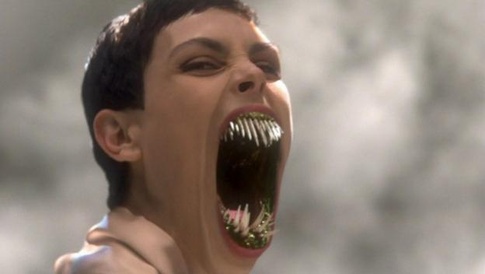 Why make such shallow characters? It’s like they got these people from a manual.

“Does exact opposite of what he’s told, rides motorcycle, stays out late…”

Another thing I didn’t like was all the unanswered questions. Not cliffhangers, not twists in plots that had me on the edge of my seat, but actual questions that began with “what” or “why.” Like that thing with Tyler’s father and the stupid red sky at the end. What was that supposed to be? The creators must have known they’d get a second season before the first ended. They never gave any clues to questions like those. They just wrote them into the episode and left us. I’m not even sure if I want to know, and that’s another problem!

Anyway, I might just be being cynical. This show got two seasons, so something must’ve gone right. I’m tempted to watch the second season just to see what the hell was up with the red sky and Erica’s big mystery. Also, is Ryan going to be a bad guy now?

What did you think about V? Should I finish up?