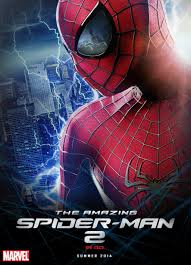 In a few days, the only wall-crawler we aren’t completely terrified of will finally return in his latest movie, The Amazing Spider-Man 2!

The second chapter will be brought to life by the talented filmmaker Marc Webb (500 Days of Summer), the same mind behind the first of the reboots. In this sequel, the “with great power comes great responsibility” issue is taken up a notch, since Peter Parker is now no longer the high school student who needs to worry about getting to class in a timely fashion, rather a young man caring for family members and significant others. Such problems, however, pale in comparison to our hero’s three new enemies, Electro, Rhino and the Green Goblin. We’ve seen multiple villains ruin a Spider-Man movie before, but things will hopefully be different this time around.

From the trailers we get the concept that, although still as humorous as he was in the first film, Peter is now struggling with the reality that, so long as he remains the “Protector of the the People,” he’ll have to make sacrifices. Whether or not this shift in tone will overshadow the lighter parts of the tale has yet to be seen.

Another difference separating The Amazing Spider-Man 2 from its predecessor is the main (or seemingly main) villain of the piece, Electro, not who the villain is but the man portraying him. That’s right, I’m talking about the uniquely talented Jamie Foxx, already known for being a singer and for his vast array of roles that have been brought to the big screen (Django Unchained, Dreamgirls, Ray, Collateral).  And seeing as this is an Oscar-winning actor,  it is possible he was selected to allow for powerful scenes of introspection during the film’s darker moments.

One great aspect of the character (as distinguished from the performer) is that he isn’t someone whose primary objective is to extinguish the human race just because “he feels like it.” Like Spider-Man, a hero he practically worships in the beginning, Electro receives his powers accidentally and has to learn to live with them. He ends up feeling betrayed by his idol who, although he rescued him once, can’t even remember the man’s name. This reminds Electro, Max, of the loneliness he’s had to push on with his entire life.

Fasten your seat belts, because the Big Apple’s in for quite the shock.