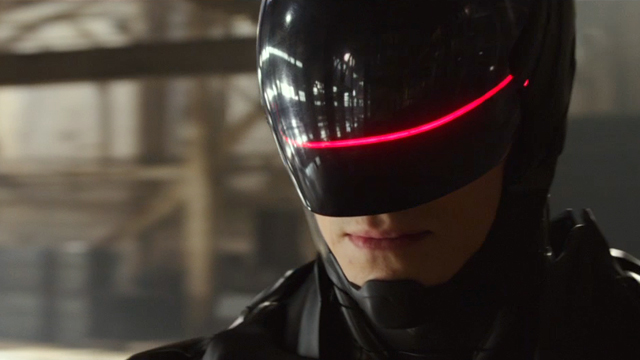 In the year 2028, OmniCorp Multinational is the leader in robotic technology and, thanks to its advanced products, has helped the United States succeed during countless wars. Living in this world is Alex Murphy, a husband and beloved father, as well as an honest police agent, always busy facing the rising power of criminals attempting to conquer the streets of Detroit. Problems arise after a car bombing burns Alex alive, leaving him with only one hope for survival: OmniCorp. They company uses its advanced technologies to save his life. From here, we see Murphy become RoboCop, a super policeman, a true “Man of Steel”, aiming to deliver justice with his new incredible cyber skills.

This is the original story, but, as Joel Kinnaman, the latest person to take on the role of RoboCop, said, “Don’t call it a remake.” Why? Because this is actually a radical change of prospective. In fact, if in the eighties the attention was focused on the machine, since the High Tech revolution was still about to start and technology was not a thing for everybody, now, in a century where kids learn first how to “slide to unlock”, then how to walk, the focus has to be on the man overcoming the machine. With all the prophecies on how technology is already transforming us into post-humans constantly present in our minds, we search for some hope in a person controlling that which he needs to survive. This new focus is actually much more intense, as the story is no longer about the means by which an action is taken, but how one uses those means.

Of course this new “human” RoboCop had raised an angry crowd of purists that, from their past hero, remember with joy the extreme violence and the strong criticism of social systems. What’s with all these smiling kids, love stories and not even a drop of blood? This is the obliged drama that whoever decides to create a remake or sequel has to face every time; it’s impossible to make everybody happy.

What we can do to find a bit of comfort and joy is remember the old times in a confrontation between the gadgets of Old RoboCop (referring to 1987’s version) and New  RoboCop “2.0”. 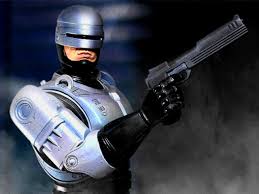 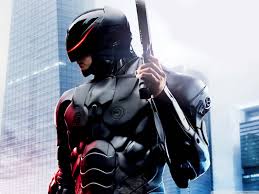 –       New RoboCop: aerodynamic, more flexible and light, resembling a biker’s helmet. The most important new feature is the fact that it can be removed almost entirely to let Alex’s face be visible while talking. Plus all the features of the old one.

–       Old RoboCop: a long-barreled modified version of a Beretta that shoots with bursts of three shots. Hidden in the mechanical leg of the cyborg, it is programmed to become functional just in his hands.

–       New RoboCop: designed especially for the movie, all in carbon fiber with an automatic aim that guarantees a 98.7% precision. It comes also with perforating bullets for use against enemy shields and can turn into a flamethrower, just in case.

–       Old Robocop: metallic grey with black details, heavy and with big shoulders, as it commands the eighties’ fashion style.

–       New Robocop: black, tight and flexible; more than armor, it has the feel of a design project. And it’s also environmentally friendly, its source of energy being the sun.

Of course the question of who would win is far too unfair, since they are separated by thirty years of technological progress and screenwriters’ imagination on new, complex gadgets (or the New RoboCop might have the very unintelligent idea of showing up with his motorbike, thus being blown to bits right away by a rocket, or something like that). The New RoboCop, with all of his unique enhancements, is an efficient killing machine and would probably kick the ass of the old guy while simultaneously texting on his iPhone.

But keep in mind that the first RoboCop was technically already dead, so, in a way, he can’t be killed.