Remember to enter our contest! Bleh!

In the season five premiere of Buffy the Vampire Slayer, Buffy and the gang meet the infamous Dracula. Obviously, we’re all pretty skeptical until he goes poof, turns into a bat, and glamours Xander into his human slave.

Before Dracula makes his appearance, however, the younger of the Scoobies are all gathered around on the beach with their happy partners. Until Willow makes a fire, causing a dark rain cloud to immediately appear. This foreshadows the end of that carefree time that the six will spend together.

Giles then confides in Willow that he feels that he is not needed anymore and is returning to England. This weighs on Willow heavily as she attempts to make Giles feel more important in very obvious ways.

As Buffy patrols the graveyard, she runs into a dark, mysterious, and quite enthralling vampire who claims to be Dracula. To which she replies, quite excitedly, “Get out!” 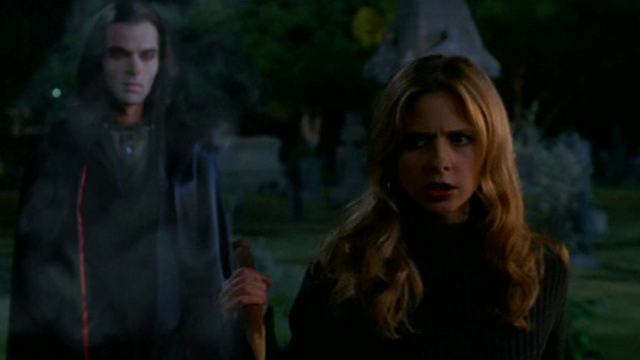 As the gang gathers to talk about the newest baddie in town, all of the girls are a bit excited over his dark, penetrating eyes! All of the guys (and Tara) seem a bit peeved. Xander goes off alone, ranting and raving about Anya’s “panting” over the guy. When Dracula appears, Xander is prepared to fight the famous vamp until he puts Xander into a trance, promising to make him an immortal. Dracula calls Xander “strange and off-putting” before disappearing into the night. 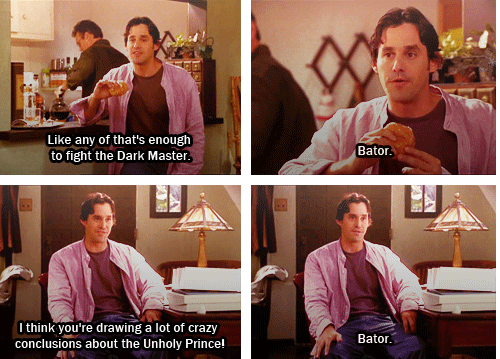 When Dracula mists his way into Buffy’s bedroom that night, she doesn’t even fight. This is also noted to be the third and final time that a vampire bites Buffy (previously The Master and Angel). As the episode continues, it seems that Buffy has been completely and totally enthralled by Dracula, willingly going to his mansion with Xander when the time is right. “I’m supposed to deliver you to the master now. There’s this whole thing where I get to become immortal. You cool with that?”

One of the best moments of the episode is when Giles gets taken into a dungeon by the three sisters.

I remember the first time that I saw this episode, I was super grossed out that Buffy tried Dracula’s blood (don’t worry, she has to be near death to be turned). This was the moment when Buffy decided to learn more about her “true nature,” the First Slayer. Also, the line, “Wow. That was gross.”

I have not read the comic books yet, but I know that Dracula makes his return. The fact that she dusted him twice and he just misted back into existence? Super cool.

By the end of the episode, Buffy confides in Giles that she is interested in learning more about her calling as a Slayer and that she can’t do it without him. So we get to keep Giles, and right at the end the audience is left with a giant cliffhanger: Dawn! 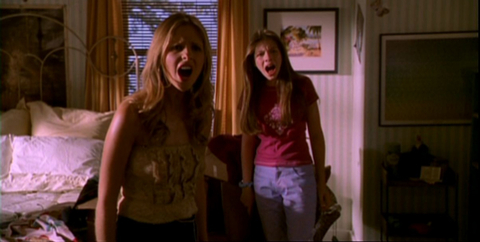