The Star Trek franchise has seen its ups and downs on a regular basis. A quality time at the movies is not guaranteed from one installment to the next. In that sense, I am glad to see that the creative team behind 2009’s franchise reboot didn’t get too fancy in trying to replicate what worked last time around in its sequel. While the movie works far better as an action movie than a traditional piece of Star Trek or even a science fiction movie in general, Star Trek Into Darkness boast enough witty repartee and thrilling action sequences to be considered among the best outings this summer had to offer.

The movie picks up shortly after the events of Star Trek, where our young crew led by James T. Kirk (Chris Pine) has to navigate a universe thrust into a different timeline from the original franchise. Here, Starfleet is in a state of fear following the destruction of the Vulcan home world and have become militarized in its wake, a sentiment brought to the fore by the character Admiral Marcus (played by Peter Weller, of Robocop fame) and echoed by Simon Pegg’s Scotty when he exclaims, “we’re supposed to be explorers!”  Following terrorist attacks enacted by the villainous John Harrison (Benedict Cumberbatch), Kirk leads the crew on a mission of revenge in response and soon becomes embroiled in an intergalactic conspiracy.

The film’s biggest strength is its main characters. The entire cast is perfect in their hand-me-down roles, a surefire testament and proof that the original film with these performers was no fluke. While the focus of the movie clearly rests in the relationship between Kirk and Spock (Zachary Quinto), each of the cast is given time to shine in the scheme of things. This accounts as a prime example of how well this movie is paced. Even in the darkest moments, there always seems to be a well-placed line or action that brings some levity back to the proceedings in a way that feels natural and not out of place or annoying. To that end, Into Darkness is a rather brilliant exercise in swashbuckling adventure spectacle featuring economically realized young spacefarers. 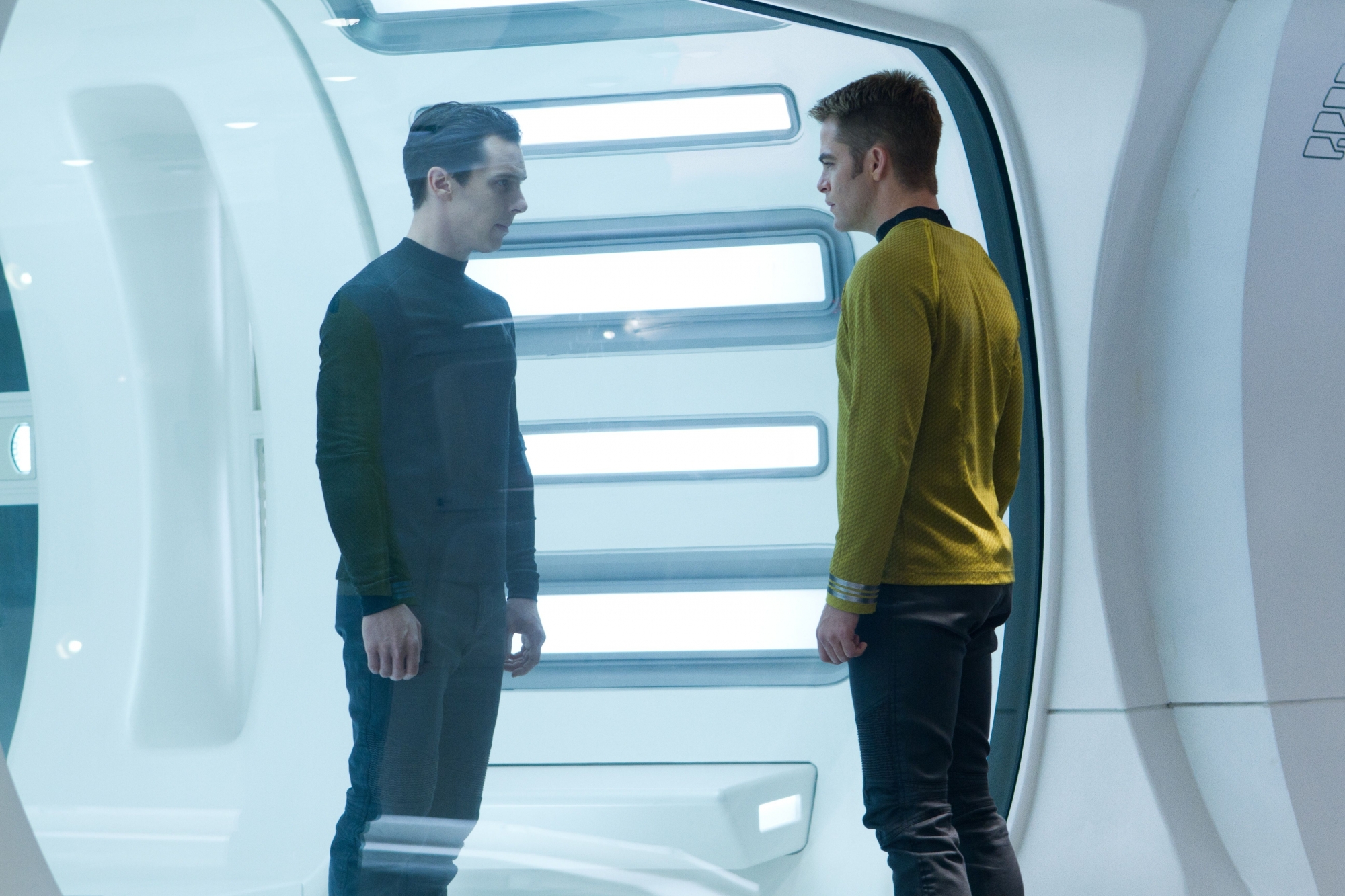 While the character interactions and performances are great, the overall scope left a little to be desired. Sure, the revenge theme is done in a better way than in the last movie and the post-9/11 commentary isn’t as ham-fisted as it could have been, but the whole story feels more like a connect the dots/ go from Point A to Point B then bring back Object C type adventure instead of the exploration suggested by the end of the last movie. In certain stretches it feels more like a stopgap adventure so our heroes can get to the five-year mission into the far reaches of space. I am still waiting to see that movie (although I guess The Motion Picture and The Voyage Home count for something in that sense).

Despite these reservations, it’s hard to argue with how stylishly Into Darkness plays out. A lot has been said about the main villain in the movie (I’m not going to spoil it here, even though three months after the fact everyone pretty much knows) and I for one believe he is the best part about the movie. His story is handled in a clever way that subverted my expectations, culminating in a show-stopping sequence somewhere past the halfway point where an alliance of convenience must be enacted. 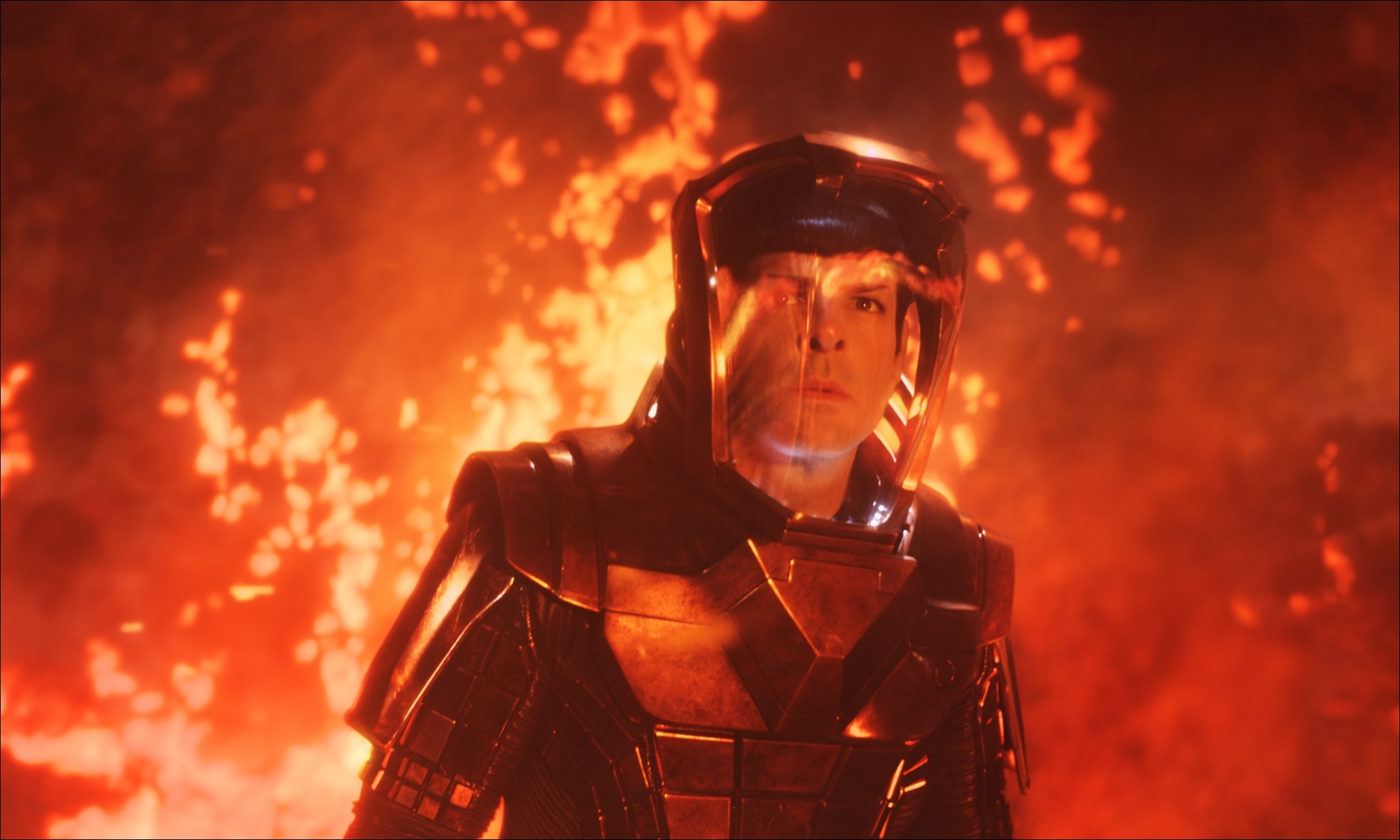 Even when the film strays way past the point of homage and into outright lifting entire portions from previous Trek lore (although as a reversal), it never left me gasping in futile irritation at how lazy that prospect might seem. That is quite a feat. If a movie can heavily reference something I’ve seen before, with the same characters no less, and still leave me emotionally invested in what I am seeing, then the fact that route was taken by the filmmakers is vindicated in my book. Some might not see it that way, and that is totally understandable, but it worked for me.

Star Trek Into Darkness is a thrilling good time at the movies. Certain story beats may come into suspicion after seeing it, but I did not for the most part as the heightened action set pieces and consummately entertaining dialogue washed over the screen in the same manner as the trail marks of the Enterprise’s warp speed. Even if it doesn’t quite move the overall story forward as much as it could have, it makes me suitably excited for future Treks.