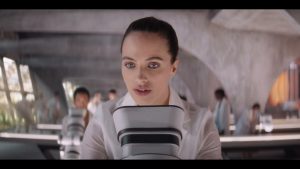 Brave New World: Does It Deserve That Name?

In a deviation from my usual rules, for Brave New World, I watched it all. The entire nine episodes. I did this so I could properly cover how it fits the original tale.

And I’m going to break this article down into three connected topics. I want to do a general overlook of the dystopian elements, a look at it as an adaptation, and how it is as a standalone show.

The first is easiest because they kept a lot from the book. It’s set in a future where a rigid caste system allows the “Alphas” and “Betas” a world of drugged-out hedonism. It’s also a world of cloning and genetic alteration. No one is conceived, ever, and the lower on the totem pole, the more damage is done to the embryo. 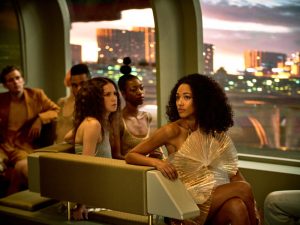 The Satire of Brave New World Is Still Very Potent

And it’s also here where I must mention something—warn you of something. The show, the book, and the concept of the world are one of extreme sexual promiscuity. The show may tone it down from the book in places, but it still contains stuff that’s on par with Game of Thrones. It is a Mature-rated show. Do not watch if you cannot handle that.

Also, do not watch if the concept of drugs bothers you. This world runs on Soma. It is an incredibly hard-to-overdose-on mood-altering chemical. It numbs, produces artificial joy, and otherwise never allows the citizens to understand the situation they are in—at least in the show.

And now, with all that in place, we can talk about it as an adaptation. Because Brave New World the novel does not fit a television show. It’s a story about a relatively normal man (compared to the citizens of the dystopia) coming to this society and exploring how messed up it is to him. The book just continues to further highlight the awfulness of the situation until it ends in tragedy. It’s not exactly a 3-act structure. 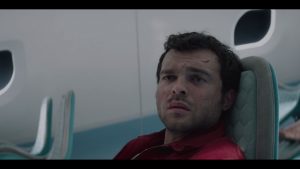 To Adapt This Book, Changes Had To Be Made

Instead, the show interjects a lot of stuff. It talks of romance, of revolution, of humanity. Often, the underlying concepts of the book still ring true—some moments feel perfectly in step—except when they don’t. Except when the show randomly takes a turn into cyberpunk and modern YA dystopian trends. I’m not saying that introducing a supercomputer and brain interfaces is not something that wouldn’t be in Brave New World had Huxley thought of it, but it turns the series into a more action-orientated show. It can turn episodes into tales of danger and darkness that’s more than just existential. There’s a lot of moments that are rather big tonal shifts.

But, again, when this show wants to be thematically correct to the book, boy does it manage it. How characters in New London treat their bodies as toys, as a thing for pleasure and not much else, is accurate and disturbing. Moments render these people as almost robots, going through the motions. The book wasn’t subtle, and neither is this. 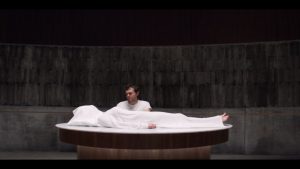 But what about it as its own thing? As a show divorced from the book? Well, if I had no context, I would label this one of the best science fiction dramas on the market. When it’s good, it’s amazing.

Particularly the acting. Especially the acting. Jessica Brown Findlay (Lenina) takes a rather one-note character from the book and gives her power and pathos. Joseph Morgan (CJack60) does not even get that much dialog, and isn’t from the book, and yet steals his scenes. Hannah John-Kamen (Helm) manages an eccentric artist character in a world that should barely understand art and lands her scenes every time.

And then there’s Harry Lloyd (Bernard). 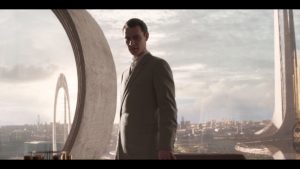 This Series Has Just An Incredibly Talented Cast

He’s a joy in every scene. His character’s progression is glorious. A character I barely remember from the book is taken into this place of raw emotions and insecurities. He’s the main character, even if the show does not always act like it.

And these characters get to walk around a world of varied sets, unique soundscapes, and are shown by a camera that controls perspective and perception and emotional resonance and horror with extreme skill. Same with the dialog about half the time, and nearly always with tiny props and subtle choices. 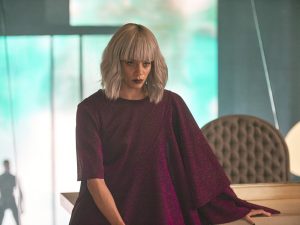 Brave New World Hits A Lot Right Out Of The Park

I will not and cannot ever say Brave New World is easy to sit through or that it is for everyone. It’s not only graphic and shocking in every conceivable way, but it’s also horrifying, and existentially gut-wrenching. Handmaid’s Tale is the only show I’ve experienced that’s more upsetting. I had to walk away a few times while watching both of these shows.

But, when I could stomach Brave New World, I was pulled into this ruined society of dark imagination, willing to play ball with this version. It’s not close to perfect. The ending was polarizing. There are issues I’ve mentioned, but it’s strong science fiction worthy to bear that name. 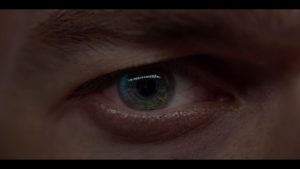