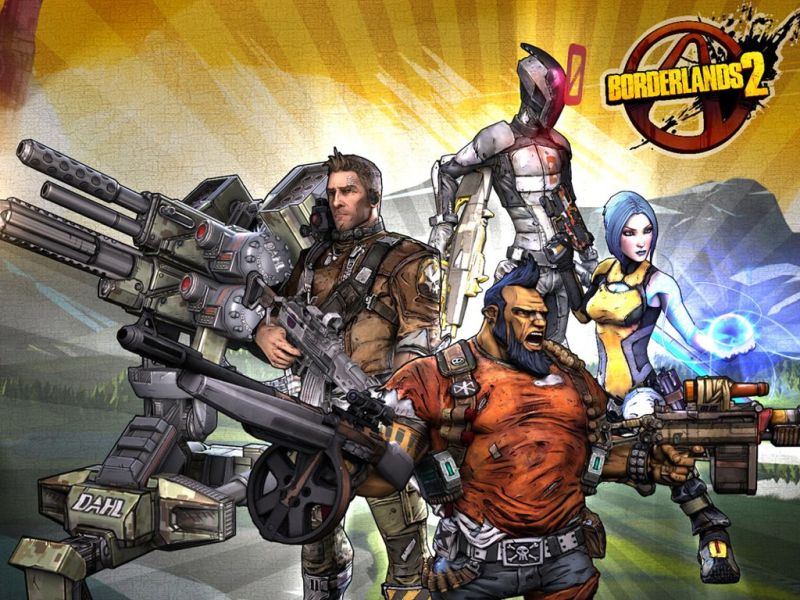 Borderlands 2 is the sequel to the hit game Borderlands, and was released in September 18th, 2012.  The game follows a new set of four vault hunters on the planet Pandora, as they try to stop the evil Handsome Jack.  Borderlands takes everything that made the first Borderlands great and expands upon it, making the game more enjoyable than ever.

The story is much easier to follow in Borderlands 2 than it was in the first game, making the player care a lot more about what happens.  Most of this has to do with the easily identified antagonist, Handsome Jack, which the first game severely lacked.  Handsome Jack is not only interesting, but he is absolutely hysterical, talking to you as you progress the story.  One of my favorite monologues is shown in this video:

Borderlands’ real claim to fame was the fact that it had over a trillion randomly generated guns.  That number has gone even higher, with each manufacturer’s weapons becoming more distinct, as well as there being a larger variety of looks and combinations.  There is also a new elemental type, slag, which causes any non-slag bullets to do increased damage to a slagged target.  There are a ridiculous number of guns, and weapon drops are more common in Borderlands 2 than they were in the first game, giving you even more chances to find those wonderful insane weapons.

The four classes have been changed, though each one has similarities to one of the previous four.  The skill trees are much more interesting than they were in the original game.  Each of the three trees for each class has a specific purpose, and a game changing ability at the end of it.  Each time you level up, you get a skill point that you can use to improve your abilities in various ways.

The Commando is the new Soldier.  His special ability is a turret that can attack enemies for him.  His three trees augments his turret, rocket launchers and assault rifles, and survivability.

The Siren is the new, well Siren.  Her special ability is called phaselock, where she can suspend an enemy helpless in midair for a few seconds.    Her three trees augment: elemental effects, healing and assisting teammates, and speed.

The Gunzerker (my personal favorite) is the new Berserker.  His special ability is to Gunzerk, where he gains damage resistance, recovers health, and pulls out a second gun.  His three trees augment his ability to regenerate health and stay alive, his gunzerking and weapon skills, and his damage output.

The Assassin is the new Hunter.  His special ability is called Deception and it creates  a decoy and turns him invisible for a few seconds.  His three trees augment his sniping skills, speed and damage potential, and his melee and deception skill.

You can find in depth skill tree information and more at www.borderlands2.com

Borderlands 2 is a long game.  A friend and I have played well over 30 hours with the end no where near in sight.  With all of the side quests to do and the fact that enemies and chests respawn  can leave you with literally endless fun.  The crew at Gearbox put a lot of work into this game and it shows.

Borderlands 2 really is addictive, and it can be played with up to three other people online.  You can also play splitscreen.  Everything has been improved since the last Borderlands, and with more content and a new class called the Mechromancer on the way, there is only more fun to be had.  I would highly recommend picking up a copy as soon as possible so that you can get into the action as quickly as possible.