After reading the synopsis for Translucid, the first thing I wondered was why everyone who likes superheroes isn’t reading this series and talking about it already. Comixology’s little blurb for the BOOM! Studios series goes like this:

The Horse has been the arch-enemy of The Navigator for years. But The Horse feels The Navigator’s moral compass slipping, and even a villain can’t let that happen. The Horse decides to get a closer look into The Navigator’s past that he’s buried deep in his subconscious and find out what drives a person to make the right choice, and what propels someone to make a selfish one. Thus begins an exploration of why a young man would take the mantle of a superhero.

This is the quintessentially modern superhero story in the sense that it probably would not have made sense to people before the 1980s—approximately a generation after the superhero became an icon of American popular culture. Basically, this is a rare sort of post-Watchmen story that still partially believes in the the fairy tale of the superhero.  The characters are coming into their own and the story is fully stand-alone in the sense that all the people in it are technically original, but this tale is still one that will mostly appeal to people who have experienced many superhero stories already. It works because it plays with the tropes of its genre. And despite the fact that the series purports to be about figuring out The Navigator, it feels as though it’s a story in which the readers might be able to learn just as much about the teller of the tale.

The Horse is the one who leads readers on this psychedelic trip down memory lane. He seems to  influence the readers’ experience of the narrative because we see The Navigator’s memories while and how he sees them. He is also the one who orchestrated The Navigator’s forced recollections and current predicament within the story. The Horse is a smart, principled (in his own way), dedicated and observant person. What readers may not figure out so quickly is why he is doing all of this. He tells the readers that he and The Navigator are twin stars, the Yin to the other’s Yang, and explains how the supervillain must contrast with the superhero. But why is a supervillain the arbiter of heroism? Why would a supervillain want to know how a superhero ticks? 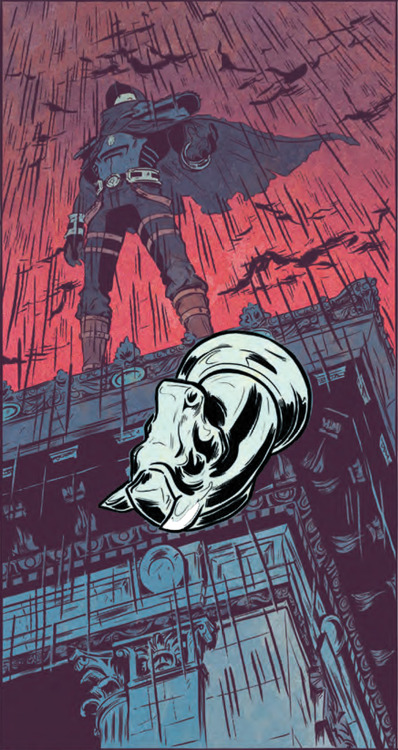 The Navigator. Designed by Dan Duncan. Art by Daniel Bayliss.

Translucid is built upon this relationship between the hero and the villain, as well as a past relationship between a boy and his elder brother that seems to be influencing this current one. The end of Issue Three confirms, for me at least, that this will continue to be the case. The story is actually less about how a hero is made than about how close a superhero and supervillain can be. For example, at first I found pieces of the hero’s origin story disappointingly cliché. But then I realized that these elements were ones often found in supervillain origins, and I became more intrigued by the direction the story was headed. As the creators write in Issue Two, “The world can be a disorderly place for a born perfectionist with a curious mind. They say the difference between good and evil is intention. But perhaps it’s opportunity.” This story not only assumes that a hero and villain are always in a matching set, but it seems to also claim that a hero can be pushed into heroic deeds or that a villain can be self-motivated into villainy. And in comparison to the genre archetypes, that is quite topsy-turvy.

But it should be clear by now that this is not your regular superhero comic. The art reflects this as well, with its rather plainly handsome characters and anti-spandex hero and villain designs. The color schemes and distortion of images are used to create the moments of jarring shift between the appearance of normalcy and what must be someone’s imagination. The series is about superheroes and draws on their collective archetypes, but visually and narratively it does not accept the world of capes and tights.

Nor does it fully invite us into its world. The very nature of its telling, with the aid of a narrator, assumes an audience and therefore distances itself from those readers. When we are told a story, we never forget that it is just that. The narrative also jumps back and forth in time, mixing memories, facts, and perhaps fiction. It becomes unclear how much readers can trust what they see. I wonder if, in the end, this series will really be about the superhero at all. Whose origin story this is, in actuality, and how much it has been tainted by his counterpoint character (good or evil), remains to be seen.

This article is based on Issues 1-3 of Translucid, from BOOM! Studios. It is written and created by Claudio Sanchez and Chondra Echert. Illustrated by Daniel Bayliss. Colored by Adam Metcalfe.