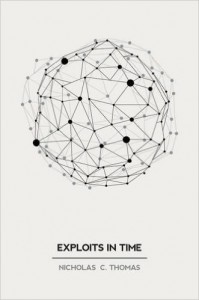 Exploits in Time is not a fiction book. At least not in the traditional sense. First off because it’s a collection of short stories, but that’s not what I mean.

What I mean is it’s wholly unlike anything I’ve read before. So much so that I’m uncertain on how to go about reviewing it.

It doesn’t have characters. It has voices.

It doesn’t have a plot. It has situations.

It’s not a book. It’s a thought experiment. And that thought is “What would happen if time travel existed?”

And most of the stories seeks to answer that question in a different way. From a magician who disappears on stage, to a poltergeist, this book is full of theories and applications of science fiction’s favorite tool.

And in that regard it is a triumph, because it certainly kept my head going. While reading it I found myself sitting and pondering the concepts presented, often just trying to wrap my head around the implications of it all.

What I’m saying is it’s a thinking man’s book, through and through. Built specifically for people who like to discuss theoretical science and the like. But with that problems are bound to come. Due to the nature of the stories, if you’re not interested in the concepts that particular chapter is focusing on, then it can come off as a tad dry. And I admit this could be a turn-off for some readers.

The other major thing of note in this book is, surprisingly enough, its spiritual aspect. In a large amount of stories the concept of the human soul comes up, often playing a major role, and while I found this jarring at first, after a while it added to the book’s depth and made each new chapter more interesting to read.

Though not for everyone, Exploits in Time is a curious look at time, space, and the in-between, one that might just show you ideas you’ve never considered before.

If you enjoyed Brandon’s exploits, you can find more of his work on his website, Coolerbs Reviews. You should also take a look at his many short stories in our Friday Fiction category.