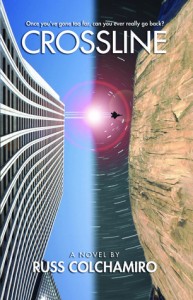 Ever liked a book, and in some portions even loved it, but hated the main character?

It’s certainly a first for me. Never before have I so thoroughly enjoyed a story, but only when it went away from the protagonist.

That’s not to say that the main character, a pilot by the name Marcus Powell, is bad. Far from it. He’s well-rounded, and likable, and all the usual things that make for a good leading man.

Instead, I think the issue is simply that he is outclassed by everyone else. The book has a habit of jumping around on the timeline, and each time it does, it ends up focusing on a different supporting character. And these parts end up being the highlights of the entire book. Russ Colchamiro clearly has a talent for creating characters, because each of the new ones introduced charmed me within only a few pages.

The most dramatic example of this was around the middle of the novel, when a character ends up having something horrible happen to her (which, for the sake of remaining spoiler free, I won’t specify). I felt terrible for her. I understood her struggle, and it was only after she left the story that I realized she had only been introduced fifteen pages ago!

All the great parts of the book are like that: pockets of humanity. If it weren’t for the overarching story, I would have simply thought it an excellent slice of life anthology.

I’m not saying I disliked the main plot, as it was quite serviceable as a method to set up those moments, but that’s all it was for me, a setup.

Then there’s the climax. Oh god, that climax. I’ve read some trippy stuff in my days, but I haven’t seen it so heavily concentrated in one section since the last time I read Alice in Wonderland. Honestly, I cannot even begin to describe it. You’ll just need to read this book to see, and trust me…it is worth seeing.

All in all, this is quite the science fiction book. It might be the story about a man flying into the great unknown, but its heart really shines every time it gets a chance to land.

If you enjoyed Brandon’s landing, you can find more of his work on his website, Coolerbs Reviews. You should also take a look at his many short stories in our Friday Fiction category.