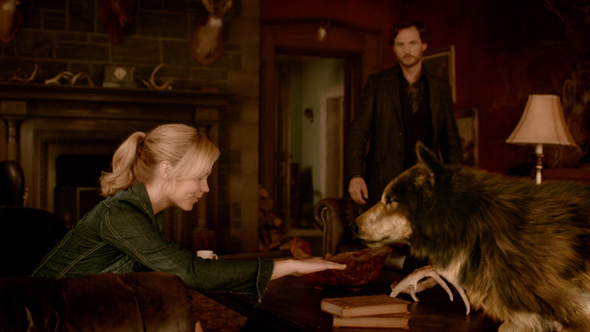 Bitten’s fifth episode is packed to the brim with FEELS. Throughout the episode, we travel back and forth between the present and the past. Not only do we get to revisit the scene of Clay and Elena outside of Stonehaven for the first time, but we also get to see how they met four years ago.

Elena was in college and in need of money for her tuition, so she took a job as a typist for Clay. She worked for him, but soon the professional relationship became more, and they got engaged (why Clay wears a ring in the present). I really liked seeing the two of them together, even if it was in the past. It made me wonder why the series didn’t begin there. It must’ve been a conscious choice to pilot the story five years in the future, but there’s a story in the past. I’m interested in learning about the writing process for this script. For instance—I mentioned this before—why five years? Why not give Clay and Elena a longer relationship? Eh, okay, I’ll stop with that. 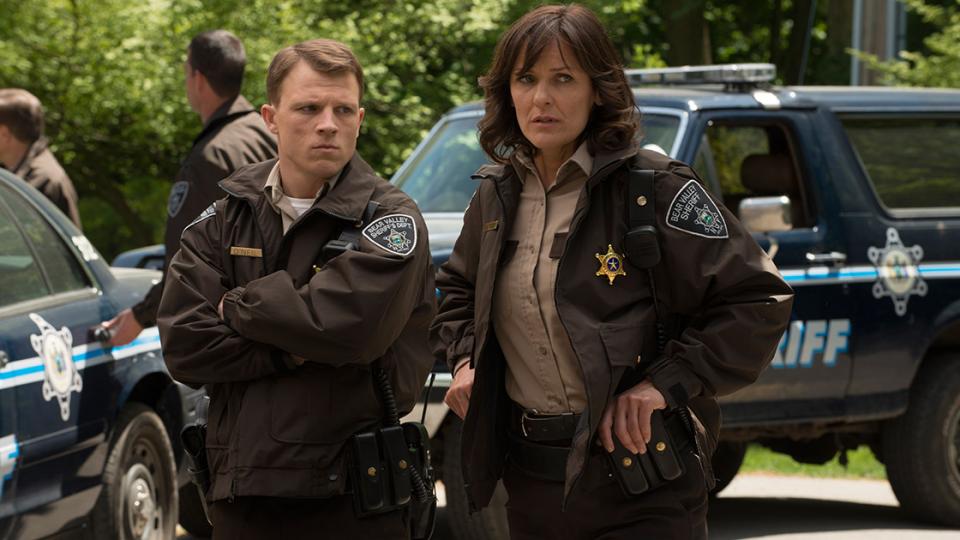 Anyways, we also get to see Elena go through what Jeremy called “The First Change.” (Say that with eerie music playing in your head.) I was right! Clay was the one who bit Elena (aren’t I the rocket scientist, guessing the obvious). I laughed so hard when he bit her. The entire scene was so nonchalant, but when you see the bites, they look like they caused excruciating pain. Elena was all, “Oh, it’s nothing. He didn’t break the skin.” If I was there, I’d be like…O.O *calls ambulance*. For the rest of the past scenes, Elena basically looks strung out on drugs. She even knocked Clay out once and ran off.

I was surprised to hear that Clay isn’t biologically related to Jeremy and that he wasn’t born a wolf. Jeremy found Clay when he was a boy, bitten, alone, and very untrusting. Jeremy had to wait weeks (yes, I typed WEEKS) for Clay to come to him. I knew Jeremy was too young to be Clay’s father (unless they did that thing where wolves don’t age), but I was thinking he was Clay’s older brother or something. I wonder how Logan got there. Maybe we’ll see next episode.

In the present, the guy with the dog that got into an altercation with Clay, Michael Braxton, is still missing. The cops ask Jeremy if they could search the Stonehaven property after they find Braxton’s car on the outskirts. He agrees, much to everyone’s dismay, but what could he do? Right now, Clay is the biggest suspect in Braxton’s disappearance because of the fight. Plus, the town seems to be looking for someone to blame for all of the murders. I heard one of them complaining about the Danvers being wealthy while he was struggling to pay bills. Can you say “witch hunt”? It won’t matter if any of them believe the Danvers are actually responsible. The townspeople are scared and when people get scared, they get irrational.

The Mutts have also recruited another psycho to terrorize the people of Bear Valley. I guess if one dies another just pops up to fill its place. It’s a man named Victor Olsen, and it looks like he knows Elena, or knew her. It was a tad understated this episode, but this guy clearly has a penchant for little girls.

To make matters worse, Jeremy agrees to have a sit-down with Daniel Santos, the lone wolf whose family is at odds with the Danvers. He wants to trade information for Pack status. He doesn’t tell them anything new, but he gives them a motive. He says Clay is the reason Mutts are banding together to strike against the Pack. They’re afraid to fight Clay on their own.

I don’t trust this guy. Something’s off with him, like how he wanted to wait for Elena before he told them anything as if his message was really for her. There was also that bit when he was leaving. He said, “The queen can do anything she wants.” What did he mean by that? I don’t know. I think I see his tail. Something tells me this Santos is not a wolf; he’s a fox.

Elena left (AGAIN), asking Jeremy to stop asking her to return. All the boys watched her leave. It was too much for me! Elena, just stay and be part of the family! I hate you! You always do this to us!

She’ll be back. They always come back.  It’s just that because of how she left, I think the only way she’ll return to Stonehaven is if there’s another death in the pack or the trouble follows her to Toronto. At this point, Elena will have to return home on her own because, after a speech like that, Jeremy respects her too much as a daughter to make her. I’d come back home if you asked, Jeremy! I’d come back! Wow, I am getting way too attached to this show.

If you enjoyed Keyoka’s review, you can find the rest of her vork right HERE on Sci-Fi Bloggers. You’ll see an abundance of it during our Day of Blood tomorrow! Bleh! You can also follow her on Twitter @keyokakinzy. Bleh.