Part 2 of Being Human’s series opener ties up the loose ends from the last episode’s cliffhangers. Josh (played by Sam Huntington) manages not to kill his sister, Emily (played by Allison Louder) and she is saved before she learns his secret. It also turns out that Rebecca (played by Sarah Allen) the coworker Aidan (played by Sam Witwer) attacked isn’t dead after all. Before going into the main plot points of the episode the writers decide to show how each of the three leads became what they are.

Aidan was a soldier in the Revolutionary War and was turned into a vampire by Bishop (played by Mark Pellegrino) during an attack. Josh was mauled by a werewolf in the woods with an unlucky friend who didn’t make it. Sally (played by Meaghan Rath) died by apparently falling down the stairs late at night. 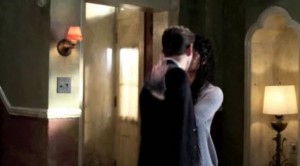 I see right through you, girl.

All three suffer terrible fates, but who if any has it the worst? While Josh and Aidan are clearly dangers to themselves and others, Sally is not only dead, she is forced to exist without the ability to reach out to her loved ones. Scenes with Sally attempting to contact her fiance, Danny (played by Gianpaolo Venuta), when he visits the house show her turmoil. The only fate worse than death is to spend eternity cut off from the people you truly care for.

The other interesting story of the night is Rebecca’s resurrection: hell hath no fury like a woman scorned, especially one you almost kill. Understandably, she’s royally pissed and makes it her mission to make Aidan miserable. When he runs into another coworker from the hospital, Rebecca slaughters the girl and dares him to “save” her by turning her into a vampire. He eventually allows the girl to bleed out against Josh’s protests.

It could be said that Aidan had the chance to save the girl and instead allowed her to die, however in his mind being a vampire is a curse and seeing how Rebecca turned into a cold-blooded killer upon her change reinforced that belief. Allowing her to die was actually the right decision because this meant she could die as the woman she was.

This episode did a good job of setting up long-lasting story arcs such as Rebecca’s crusade against Aidan. There also seems to be more behind Sally’s death than just a simple fall down the stairs. Surely the writers wouldn’t have solved that mystery so early into the series. While Bishop seems like an intimidating villain, so far he’s been pretty tame, almost a gentleman at some points. Hopefully, he’ll have some kind of evil plans to take over the city or something to make him more menacing and interesting.

“I can’t believe I didn’t smell that stink a mile away. Are you a werewolf? Gross! It’s in my hair!”

When he’s told to act normal, Josh puts on an Irish accent. It’s pretty convincing. It might get him a free drink on St. Patrick’s Day.

“Dad never thought I’d amount to much. Wait until I grab him by the throat and eat his heart out.”

Sally’s poltergeist abilities must cost the boys a fortune on house repairs.

“Am I the only one who thinks that Danny coming over is a tremendously bad idea? I mean, what if he sees you?” “I’ll crap rainbows, I swear to God!”