As blood trickles, so do reviews of older episodes of shows, bleh.

What happens when a vampire, a werewolf and a ghost try to live under the same roof? It sounds like the start of a joke, but it’s actually the plot of Being Human, an American remake of the British television series of the same name. It follows the three housemates as they try to handle living with humans and each other in Boston.

The pilot episode begins with a monologue from vampire Aidan (played by Samuel Witwer) about how monsters want a chance at life and love like normal people and sometimes make mistakes along the way. Aidan’s “mistake” is killing and feeding on a coworker after she invites him in for a nightcap. He’s then forced to call a vampire cleanup crew to cover up his indiscretion.

Josh (played by Sam Huntington) had a rough night of his own as it was his time of the month. The next morning, after waking up naked next to a half-eaten deer, Josh meets with Aiden to clean himself up on their way to the hospital where they work. The silent exchange between the two shows the routine is as normal for them as getting coffee and a newspaper. 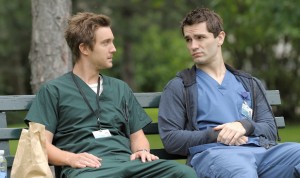 Dude, we need to find a place.

The episode does a good job of showing the close relationship between Josh and Aidan. Their individual struggles bring them closer together as friends because only they could understand and help each other. So they decide to rent a house together so they can try to have a semblance of a normal life.

However. soon after they move in, they discover the house is haunted by Sally (played by Meaghan Rath), the fiance of their landlord. Sally has been dead for months and can’t remember anything about how she died. That said, she’s ecstatic to have people living in the house who can see and talk to her.

The show does a good job of delving into the problems of each of the three leads. Sally’s initially cheerful attitude doesn’t erase the knowledge that the life she had is over. Her roommates have the chance to continue living albeit tortured lives, whereas she is stuck in limbo with no way of moving on. 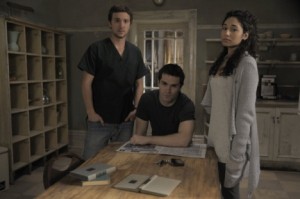 Aidan’s struggle to drink blood from the hospital supply instead of humans is depicted like an addict trying to kick his habit. His resolve is tested by Bishop (played by Mark Pellegrino), a vampire police officer who runs the organization that cleaned up after his murder. The two also share a bloody past (they brought new meaning to the term “wedding crashers”). There is the dynamic of a drug dealer trying to entice his customer back.

Although Josh’s condition would seem to affect him only once a month, he’s had to give up his old life because he has no control when he changes. This was played out through his reunion with his estranged sister, further dramatized when she became trapped with Josh during his transformation.

Overall, Being Human’s pilot episode was very enjoyable. It had engaging characters, witty dialogue and the special effects were both good and not overused. The show also manages to pay homage to the original British series while making original changes as well.

If Sally’s clothes are any hint, she died comfortably.

“I am God. I am everywhere. I drive all night just to get back home.” “Are you trying to scare us with Bon Jovi?”

“You two gonna go all Twilight on each other at some point?”

Since Josh is Jewish, maybe his wolf eats Kosher.