Create Your Own Miniature Planet

Have you ever looked up at the night sky and wondered if you could discover a star or even a planet? What if instead of looking for planets you created one small enough to fit into the palm of your hand.

Shanks FX of PBS Digital Studios has come up with a way of making small planet replicas inside of Petri dishes. With the ingredients milk, food coloring and dish soap, you can have a mini Jupiter on your desk. Even if you’re not into astronomy, making tiny planets could be a lot of fun and you’ll likely find plenty of uses for them. These mini planets can be a great decoration for a bedroom, especially in the dark where they can glow brighter. It’s also a fun project to do when you’re spending the day with kids or small cousins and need something to keep them occupied.

Check out the steps to creating your own Petri Dish Planets here.

Solving Crimes Down Under

Amy Danzig is the first ever Australian, sci-fi, crime web series. Created by Josh Sambono, its titular character is based on drawings Sambono and his friend Kendall Johnson drew in high school.

Amy Danzig follows superhero vigilante Amy, who finds herself in the middle of a major criminal conspiracy. In the pilot episode, Amy stumbles across a massacre and tries to piece together what happened. Later on, two detectives investigate a mystery surrounding Amy’s fiancé, Dan. I love these kind of conspiracy stories, the plots twists and figuring out who’s good and who’s not. I’m curious to see what kind of sci-fi elements will be woven into the series as it goes on. Personally, I’ve always enjoyed time travel, so that would get my vote. I’ll just have to watch to see if I’m right.

Check out the first episode of Amy Danzig here.

In 1959, three teenagers decide to go on a stargazing trip that takes a bad turn. The night erupts into one of jealousy, heartbreak and sexual confusion but that ends up being the least of their problems.

They are attacked by large wasps who have come from outer space to invade earth. The teens are forced to put their personal feelings aside in order to survive the night. Wasp Men from Mars has been described by director Gerrit Thompson as being a cross between Invaders from Mars and Doctor Who. 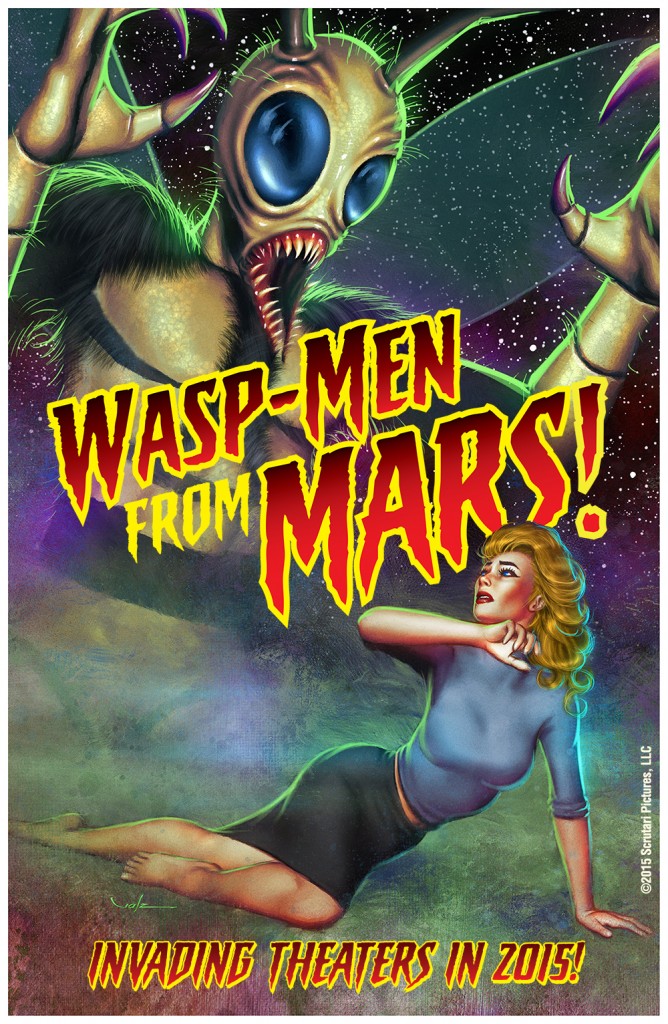 I feel that these teenagers are probably somewhat glad for the distraction of giant wasps to keep from discussing their personal issues. Sci-fi films from the 50s were often cheesy and I’m sure Wasp Men from Mars will be an interesting sendup of those films. In particular, I look forward to hearing slang from that period like “daddy-o” and “wig out.”

Learn more about the film here at the official website.

If you enjoyed Manny’s wasp invasion, you can find the rest of his work right HERE on Sci-Fi Bloggers. You can also follow him on Twitter @KN_Manny. Also, remember to check out the front page for the latest on our Week of Chaos!