Happy New Year, everyone! Here at Sci-Fi Bloggers, we run a lot of individual pieces on the site, each of them revolving around and focusing on a specific topic. Sometimes, however, we like to crank it up a notch and take a look at a few things at once. With that said, we invite you to follow us as we take a look at what’s happening…AROUND THE NET!

I feel like, in general, people won’t watch a movie if it was made in black and white. However, some of the best movies out there weren’t made in color and they’re so good you don’t really care.

Independent film director Josh Funk’s latest short film, The Spaceman, was filmed in black and white. The story follows a man who creates a cardboard ship and travels to an alien planet to get rid of a mysterious and presumably dangerous object. The trailer looked pretty intriguing and I’d suggest that people don’t immediately write it off because it’s in black and white. Of course, you don’t have to take my word for it. See the trailer for yourself:

Funk was able to complete the film after a successful Kickstarter campaign in May gave him the funding he needed. This went toward cardboard sets, a miniature spaceship and stop-motion puppets. “The Spaceman is a film dedicated to traditional effects and a return to my days as a kid,” said Funk, “when my friends and I could build anything with just cardboard and our imaginations.”

The Spaceman will be released online in February of 2015. To check out more of Funk’s work, you can view his last animated short film, Wormholes, right here on his website.

Parenthood actor Jason Ritter has joined the cast of a one-night only live performance of Orson Welles’ 1938 radio drama, The War of the Worlds. The event is a fundraiser for Sci-Fest LA: The Los Angeles Science Fiction One-Act Play Festival, and will be held at the ACME Theater.

Actor David Dean Bottrell came up with the idea and was thrilled to have Ritter come aboard. “We’re extremely happy to have Jason joining War of the Worlds. The cast is absolutely extrodanairy! We can’t believe our luck!” It’ll also feature series regulars from all five Star Trek series, such as Wil Wheaton (Star Trek: The Next Generation) and Linda Park (Star Trek: Enterprise). 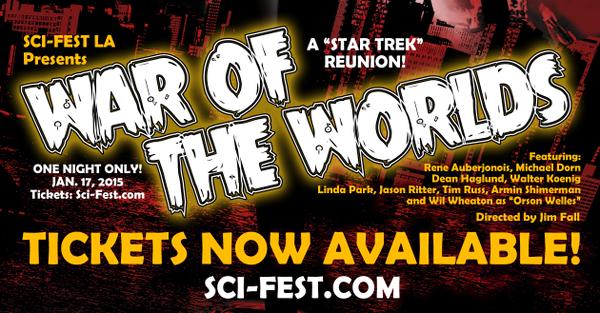 Sci-Fest LA first debuted in May 2014 and was a huge success. In addition to producing sci-fi one-acts, the organization has short fiction writing competitions open exclusively to area high school students.

The story for War of the Worlds was adapted from the H.G Wells novel. When it was first aired over the radio, it was staged as an urgent news broadcast which resulted in massive panic among listeners.

Following the performance, audience members can bid on exclusive War of the Worlds posters at a post-show party. Tickets are available for donors contributing to the event at the “Shooting Star” level or higher. Benefits for these tickets include an after-party with members of the cast. To buy your tickets today, click here.

Parents sometimes give their kids names that have a double meaning like North West. Claire Voyant is a teenager who finds out her name was actually a clue to powers she would soon develop in the novel of the same name by Rebeckah Davis.

Claire’s plans of going to college and having a normal life are put on hold when she finds herself surrounded by ghosts. It turns out her true calling was to be a medium and help lost spirits. Unfortunately for Claire, one of those spirits is malevolent and, unless she can learn to control her powers, it may take her life.

I like the premise of the book. It reminds of the television series Ghost Whisperer, which was great. I always relate to characters like Claire who are forced into the world of the supernatural because of destiny or fate. Watching how they try and navigate their lives while dealing with the weight of their burden is a compelling story for me.

Claire Voyant was published September 21, 2014 and is the first of a series. You can purchase the kindle version through Amazon here. To receive updates regarding the upcoming sequel, click here.