The Gundam universe has long been idolized as one of the most popular anime series that features mecha wars, where these giant robots have often been called “Mobile Suits.” That said, it came as no surprise that this series launched in 1979 as a TV Show entitled Mobile Suit Gundam. Now almost 30 years later, Gundam fans have alleviated their appreciation for this sci-fi masterpiece in a more personal and aesthetic expression: Gunpla. Short for “Gundam plastic model,” Bandai has certainly given us the opportunity to build our very own Gundam Models; models that take time, dedication and absolute precision. So if this hobby is that time consuming and challenging, why bother at all? I recently got a chance to interview a very dear friend of mine who dedicates most of his day building these magnificent beauties, ultimately proving that the challenge is worth the time and effort. 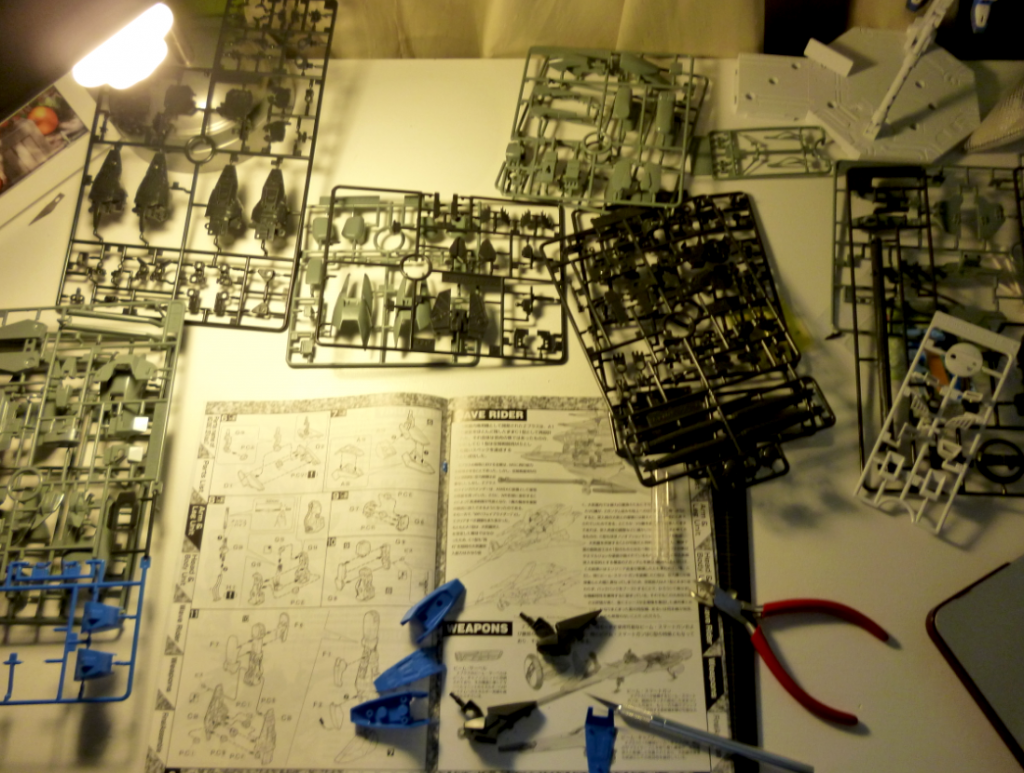 Well I’m a really different story compared to a great majority of fans. Most people are immediately attracted to this hobby because of their love for the anime series “Gundam Wing’ that became very popular here in America during the late 90s. What personally got me interested is the intricacy of the modeling because it is not so much about the anime per say but this opportunity has also taken a new direction into the complexity of modeling and building. I love the great variety of the products, and the finish product is absolutely beautiful.

There are so many other hobbies that involve a great deal of modeling. Why did you specifically choose to build Gundams?

Well, Gundam modeling has this aspect where it takes awhile to build. It’s difficult but not incredibly difficult and it is open to people who are new to modeling; people that are into science fiction and the technology aspect of science fiction like myself, which are themes that epitomizes the art of Gundam building. It is also not extremely challenging as many may first assume because other types of modeling such as Zoids or cars require very specific materials such as cement or glue while Gundams are just a snap fit and you could essentially be finished in no time at all. 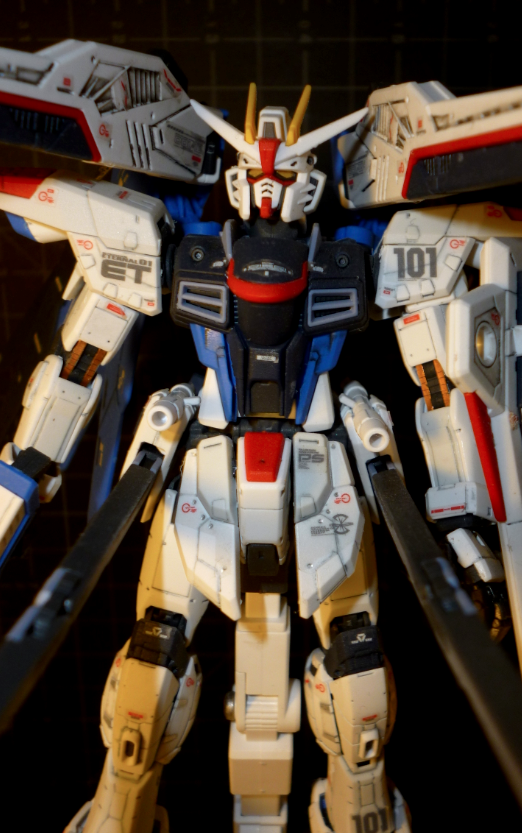 How long do these models take to build?

It really depends on how you want your finished product to turn out. Some people just want it to look the way it’s depicted on the box, and that will probably take a couple of hours. More importantly, however, it depends primarily on the model type of the specific Gundams. There are No-Grade (NG) which are very straight forward and easy to build, High Grade (HG) and Real Grade (RG) which are usually priced a little over $20 dollars, then Master Grade (MG) which are bigger, more intricate and much more detailed, and finally we have Perfect Grade (PG) which are incredibly expensive but exceptionally detailed. You can also add personal customization to the models such as sanding, top coating and inking which will probably take you a few weeks or months to achieve your ideal figure.

What then would you consider as the greatest challenge?

The greatest challenge is getting a new kit and wanting to experiment but at the same time hoping that the experiment will have a great finish. So the problem is that each time you purchase a kit, there is a risk that the product could not turn out well due to mistakes, miscalculations, etc. If you want your product to look really professional, you are going to have to practice your building and purchase more gundams to polish your skills. It is definitely a hobby that can take away a lot of money and time from your life.

Yet it remains as one of your favorite hobbies? 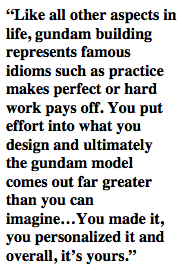 Yes, and it is precisely because it is time consuming.  Like all other aspects in life, gundam building represents famous idioms such as practice makes perfect or hard work pays off. You put effort into what you design and ultimately the gundam model comes out far greater than you can imagine when lets say compared to an action figure that is bought right off the shelves of a toy store. You made it, you personalized it and overall, it’s yours.

What would you say are the positive aspects of Gundam Modeling?

The perks definitely lie in the model’s uniqueness. Imagine having memorabilia of the anime series you have long been a fan of, which makes it seem that you own a personal souvenir from the show. It’s something that has your signature on it and nobody else’s.

Would you recommend others to give this hobby a go?

I would recommend it to those who are interested. I wouldn’t recommend just anybody to pick it up because chances are if they are not interested in the modeling or series, they probably will not finish building the models. I believe that this hobby is mainly for those who genuinely enjoy the anime or building in general. It’s not a hobby for just anybody. 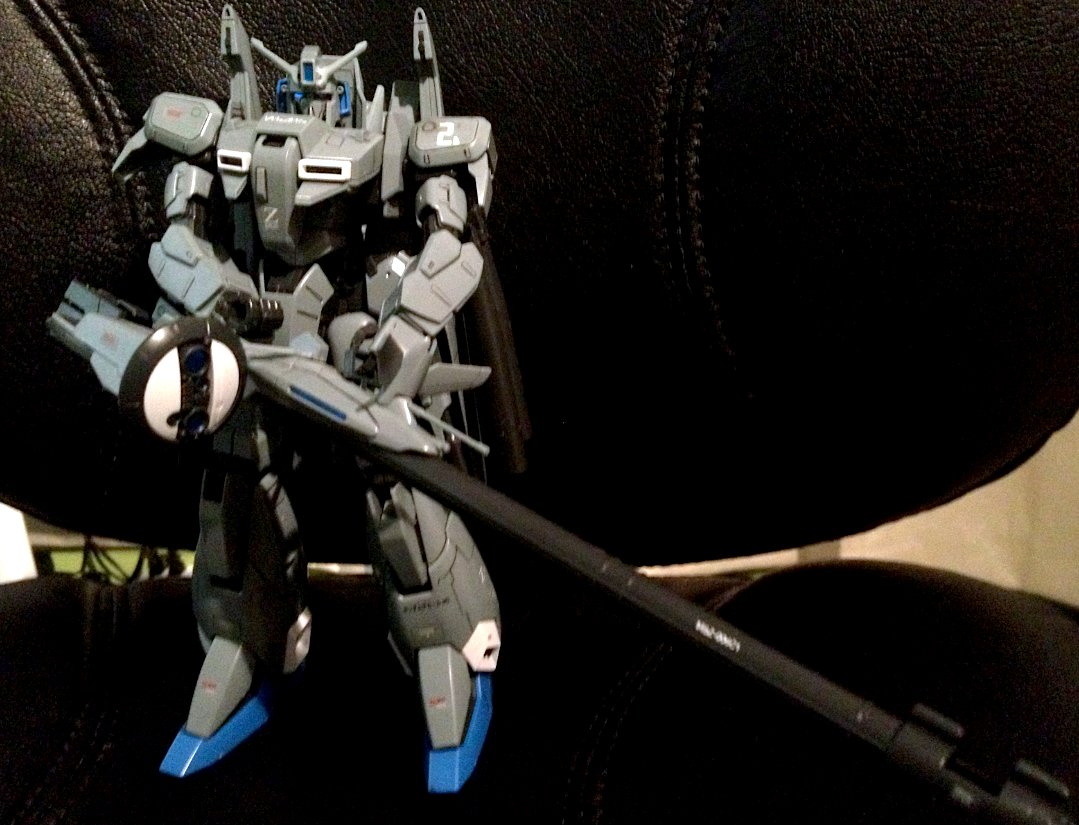 All images are courtesy of the interviewee’s personal collection. For more information or other questions about Gunpla, please contact the interviewee at the email below!